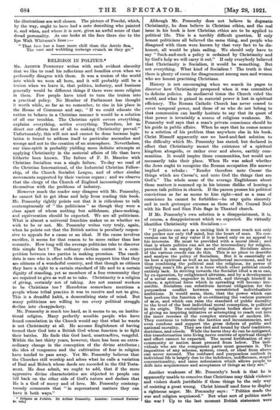 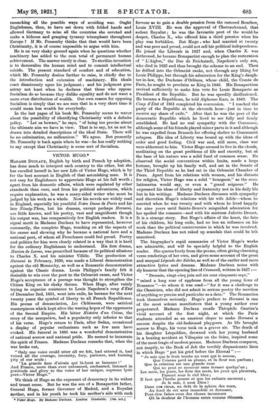 Mn. ARTHUR PONSONBY writes with such evident sincerity that we like to read his reflections and homilies even when we

profoundly disagree with them. It was a truism of the world into which we were all born, and it will probably still be a truism when we leave it, that politics, industry, and business generally would be different things if there were more religion in them. Few people have tried to turn the truism into a practical policy. No Member of Parliament has thought it worth while, so far as we remember, to rise in his place in the House of Commons and say, "If we could educate the nation to behave in a Christian manner it would be a solution of all our troubles. The Christian spirit covers everything, explains everything, settles everything. Therefore, let us direct our efforts first of all to making Christianity prevail."

Unfortunately, this will not and cannot be done because legis- lation is bound to address itself to particular anomalies and wrongs and not to the creation of an atmosphere. Nevertheless, our time-spirit is probably yielding more definite attempts at applying Christianity in the material affairs of life than have hitherto been known. The failure of F. D. Maurice with Christian Socialism was a single failure. To-day we read of the Christian International, of the Industrial Christian Fellow- ship, of the Church Socialist League, and of other similar movements supported by their various organs ; and we observe that the clergy of the Church of England increasingly concern themselves with the problems of industry.

However much the reader may disagree with Mr. Ponsonby, he cannot fail to get ideas and help from reading this book.

Mr. Ponsonby rightly points out that it is ridiculous to talk contemptuously of "the politicians" as though they were a class apart of whom nothing but selfishness, place-seeking, and equivocation should be expected. We are all politicians.

What is almost a universal franchise makes us so whether we wish to be or not. Mr. Ponsonby writes very truly, again, when he points out that the British nation is peculiarly respon- sive to appeals for a cause or an ideal. If the cause involves sacrifice, it seems for that reason to be more rather than less romantic. How long will the average politician take to discover this simple fact ? The ordinary election contest is a com- petition between two parties in making promises. The candi- date is rare who in effect tells those who support him that they are citizens of a wonderful country, and that though as citizens they have a right to a certain standard of life and to a certain dignity of standing, yet as members of a free community they are required to give as well as to take. Christianity is a religion if giving, certainly not of taking. Are not manual workers to be Christians too ? Herodotus somewhere mentions a people whose tribal practice it was to receive and not to give. This is a dreadful habit, a demoralizing state of mind. But many politicians are willing to see every political struggle decline into eh e,apjackery.

Mr. Ponsonby is much too hard, as it seems to us, on institu- tional religion. Many perfectly sensible people who have found consolation in the Church would say that what he wants is not Christianity at all. He accuses Englishmen of having turned their God into a British God whose function is to fight their battles. He finds this God hard, unattractive, vengeful. Within the last thirty years, however, there has been an extra- ordinary change in the conception of the divine attributes ; the idea of vengeance and the cultivation of fear in religion have tended to pass away. Yet Mr. Ponsonby believes that the Churches still worship and adore what he calls a variation of Baal and Moloch whose deeds are recorded in the Old Testa- ment. He does admit, we ought to add, that if the more aggressive divine characteristics are objected to people can fall back on the other side of God's nature and declare that He is a God of mercy and of love. Mr. Ponsonby contemp- tuously comments that "in supernatural matters they can have it both ways."

Although Mr. Ponsonby does not believe in dogmatic Christianity, he does believe in Christian ethics, and the real issue in his book is how Christian ethics are to be applied to political life. This is a terribly difficult question. If only honest politicians all believed the same thing, and people who disagreed with them were known by that very fact to be dis- honest, all would be plain sailing. We should only have to say "Such-and-such a policy is ordained by Christianity and by God's help we will carry it out." If only everybody believed that Christianity is Socialism, it would be something. But not everything. What kind of Socialism ? The truth is that there is plenty of room for disagreement among men and women who are honest practising Christians.

History is not encouraging when we search its pages to discover how Christianity prospered when it was committed to definite policies. In mediaeval times the Church ruled the world, and what it gained in material power it lost in spiritual efficiency. The Roman Catholic Church has never ceased to covet temporal power, and those of us who do not belong to that communion can hardly hesitate to say that its quest of that power is invariably a source of religious weakness. Mr. Ponsonby well says that a man's private conscience should be his guide in public affairs. When he says that he comes nearer to a solution of his problem than anywhere else in his book.

Christ Himself apparently saw no hard-and-fast solution to the difficulty which Mr. Ponsonby has stated, but declared in effect that Christianity meant the existence of a spiritual kingdom alongside, or rather over and above, earthly com- munities. It would inspire those communities, but would not necessarily take their place. When He was asked whether the Jews ought to recognize the Roman occupation His answer implied a rebuke : "Render therefore unto Caesar the things which are Caesar's, and unto God the things that are God's." The whole sense of the average Englishman about these matters is summed up in his intense dislike of hearing a parson talk politics in church. If the parson presses his political convictions as far as seems to him right—and as a man of conscience he cannot be forbidden—he may quite sincerely end in such grotesque excesses as those of Mr. Conrad Noel with his Red and Shin Fein flags in Thaxted church.

"If politics can act as a uniting link it must reach not only the pocket nor only dig mind, but the heart of man. No con- version can be of any value if it is based only on an appeal to his interests. He must be provided with a moral ideal ; and that is where politics can act as the intermediary for religion, provided it can supply the moral stimulus. Socialism alone of the various creeds can do this. This is no place to describe and analyse the policy of Socialism. But it is essentially at its best a spiritual as well as an intellectual movement, and by thus combining the political and the religious, its power of unifying man's life gives it a force which other political creeds entirely lack. In striving towards the Socialist ideal a min can, by co-operation, by enlightened altruism, and by a development of a social sense, engender in himself, and through himself in others, a spiritual force which in spreading will becomi irre- sistible. Socialism can substitute mutual obligation for the purposeless conflict between unrestricted individualistic ambitions. It would seem, then that the power which can best perform the function of co-ordinating the various pursuits of mm, and which can raise the standard of public morality to the level of the best individual moral conception, is political in its origin. The exclusively religious bodies show no signs of giving an inspiring initiative or attempting to reach out into the inner recesses of the complex structure of modern life. They continue to tolerate the laxities and inconsistencies, and even condone and support the gross defects of public and national morality. They are tied and bound by their traditions, doctrines, and creeds. While the harm they do can be mitigated, this transformation into living nerve centres of spiritual thought and effort cannot be expected. The moral fortification of any community or nation must proceed from below. The indi- viduals who are the component parts must generate it. The imposition of any scheme, system, creed, or ideal from above can never succeed. The confused and purposeless outlook in individual life is largely due to the indolence, indifference, stupid conventionality, and tame submission which allows people to drift into acquiescence and acceptance of things as they are."

Another weakness of Mr. Ponsonby's book is that he is apparently unable to conceive that Christians may think violence and violent death justifiable if those things be the only way of resisting a great wrong. Christ himself used force to display a righteous anger. Mr. Ponsonby says: "Politics made the war and religion acquiesced." But what sort of politics made the war Up to the last moment British statesmen were

ransacking all the possible ways of avoiding war. Ought Englishmen, then, to have sat down with folded hands and allowed Germany. to seize all the countries she coveted and make a hideous and grasping tyranny triumphant throughout Europe ? If Mr. Ponsonby thinks that that would have been Christianity, it is of course impossible to argue with him.

He is on very shaky ground again when he questions whether machinery has added to the sum total of permanent human achievement. The answer surely is clear. To sterilize invention is to demoralize the human mind and to commit intellectual suicide. The present standard of comfort and of education, which Mr. Ponsonby desires further to raise, is chiefly due to the introduction and extension of machinery. His ideals react disastrously upon his judgment ; and his judgment goes astray not least when he declares that those who oppose Socialism do so because they dislike equality and do not want a more even distribution of wealth. Our own reason for opposing Socialism is simply that we are sure that in a very short time it would mean less wealth for everybody.

In the last pages of his book Mr. Ponsonby seems to waver about the possibility of identifying Christianity with a definite policy. "Let us beware," he says, "of being too precise about the 'ultimate aim we have in view. That is to say, let us not be drawn into detailed descriptions of the ideal State. There will be no culmination, no millennium." We agree. But presently Mr. Ponsonby is back again where he was—he has really nothing to say except that Christianity is some sort of Socialism.