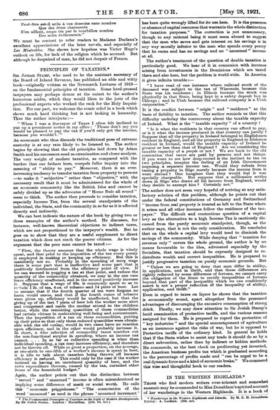 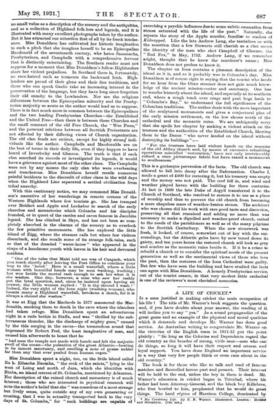 Page 18, 28 May 1921 — IN THE WESTERN HIGHLANDS.* Masa who find modern writers over-tolerant
Close

IN THE WESTERN HIGHLANDS.* Masa who find modern writers over-tolerant

and somewhat anaemio may be commended to Miss Donaldson's spirited account of her wanderings in the Western Highlands. It is a book of

no small value as a description of the scenery and the antiquities, and as a collection of Highland folk-lore and legends, and it is Illustrated with many excellent photographs taken by the author. But it has attracted our attention first of all by its frank intoler- ance. Miss Donaldson has cultivated her historic imagination to such a pitch that she imagines herself to be an Episcopalian Macdonald of the seventeenth century, who hates Bassenachs, Presbyterians, and Campbells with a comprehensive fervour

that is distinctly entertaining. The Southern reader must not suppose for a moment that Miss Donaldson's fellow-Highlanders

share her violent prejudices. In Scotland there is, fortunately, no race-hatred such as torments the backward Irish. High- landers are proud of their glens and their fine traditions, and those who can speak Gaelic take an increasing interest in the preservation of the language, but they have long since forgotten their old enmity to the Lowlanders. Nor are the religious differences between the Episcopalian minority and the Presby- terian majority so acute as the author would lead us to suppose. There is in fact much more in common between the Episcopalians and the two leading Presbyterian Churches—the Established and the United Free—than there is between these Churches and the small remnant of the old Free Church, the "Wee Frees," and the personal relations between all Scottish Protestants are not affected by their differing views of Church organization. The old clan feuds are extinct, except for highly strung indi- viduals like the author. Campbells and Macdonalds are on the best of terms in their daily life, even if they happen to have heard of Inverlochy and Glencoe. The truth is that if each clan searched its records or investigated its legends, it would have a grievance against most of the other clans. The Campbells were not by any means the only clan who were overbearing and treacherous. Miss Donaldson herself recalls numerous painful incidents to the discredit of other clans in the wild days when the Highland Line separated a settled civilization from tribal anarchy.

With this cautionary notice, we may commend Miss Donald- son's narrative of her wanderings in remote corners of the Western Highlands where few tourists go. She has tramped over Moidart and Appin and Lochaber in search of the early churches and monasteries which Columba and his disciples founded, or in quest of the castles and caves famous in Jacobite legend. She has climbed in Skye, and has not been so com- pletely absorbed in the charms of the scenery as to overlook the few primitive monuments. She has explored the little island of Eigg, where the steamer calls but where few visitors disembark, and she recalls some of its strange folk-tales, such as that of the dreaded " water-horse " who appeared in the shape of a handsome youth with leaves in his hair and devoured maidens.

"One of the tales that Main i told me was of Ouagach, which you reach shortly after leaving the Post Office to continue your way to the 'hotel.' Here is a small waterfall, where a little woman with beautiful hands may be seen washing, washing ; but woe betide the mortal rash enough to ask her what it is she washes. One day, however, a man who saw her rashly put the fatal question, and, since he insisted upon having an answer, the little woman replied : It is thy shroud I wash!' Indeed, the very sight of the bean nighe (washing woman), who haunts many a Highland waterfall, betokens a death, for it is always a shroud she washes."

It was at Eigg that the Macleods in 1577 massacred the Mao- donalds, smoking them to death in the cave where the islanders had taken refuge. Miss Donaldson spent an adventurous

night in a rude bothie in Staffa, and was "thrilled by the sub- terraneous thunder, like the discharge of mighty guns," caused by the tide surging in the caves—the tremendous sound that impressed Sir Robert Peel, the least imaginative of men, and caused him afterwards to boast that he

"had seen the temple not made with hands and felt the majestic Well of the ocean—the pulsation of the great Atlantic—beating in its inmost sanctuary, and swelling a note of praise nobler far than any that ever pealed from human organ.'

law Donaldson spent a night, too, on the little Wand called Na h- Eileacha Naomha, "the rock of the saints," lying to the west of Luing and north of Jura, which she identifies with Hinba, an island retreat of St. Columba, mentioned by Adamnan.

Her description of the ruined church and monastery is of much interest ; those who are interested in psychical research will note the author's belief that she" was conscious of a most strange but lively sense, quite outside any of my own generating or creating, that I was in actuality transported back to the very days of St. Columba," for "such buildings are capable of exercising a psychic influence due to some subtle emanation from atones saturated with the life of the past." Naturally, she repeats the story of the Appin murder, familiter to readers of

Kidnapped. Like the late Andrew Lang, she tantalizes us with the assertion that a few Stewarts still cherish as a clan secret

the identity of the man who shot Campbell of Glenure, the "Red Fox," in May, 1752. Andrew Lang, if we remember aright, thought that he knew the murderer's name ; Miss Donaldson does not profess to know it.

The chapter on Iona contains a pleasant description of the island as it is, and as it probably was in Columba's day. Miss Donaldson is of course right in saying that the tourist who lands for an hour from the Oben steamer does not gain much know- ledge of the ancient mission-centre and sanctuary. One has to wander leisurely about the island, and especially at its southern end, where a rough track over crags and peat bogs leads to " Columba's Bay," to understand the full significance of the Columban traditions. The author deals with the more important of the sculptured monuments and gives a conjectural plan of

the early mission settlement, on the low shores north of the cathedral and the monastic ruins. We are unfeignedly sorry that she spoils her chapter by making s violent attack on the trustees and the authorities of the Established Church, likening them to the Danes "who never landed on the Wand without destroying its buildings " :—

" For the trustees have laid violent hands on the remains of the old Abbey church and, by means of extensive rebuilding operations miscalled restoration,' have not only irretrievably ruined a once picturesque fabric but have raised a. monument to soullessness."

This is a grotesque perversion of the fade. The old church was allowed to fall into decay after the Reformation. Charles I. made a grant of f400 for restoring it, but his treasury was empty and the money was not paid. The roof fell in, and wind and weather played havoc with the building for three centuries.

At last in 1899 the late Duke of Argyll transferred it to the Church of Scotland, who resolved to restore it to use as a place of worship and thus to prevent the old church from becoming a mere shapeless mass of weather-beaten stones. The architect who was chosen did his work with rare good taste and discretion, preserving all that remained and adding no more than was necessary to make a dignified and weather-proof church, suited to the needs of the parishioners as well as of the many pilgrims to the Scottish Canterbury. When the new stonework was

fresh, it looked, of course, somewhat out of key with the sur- rmmdings, but the Atlantic gales have by now toned down it gaiety, and ten years hence the restored church will look as grey and sombre as the monastic ruins beside it. If it be a crime to

generation as well as the sentimental views of those who love the past, then the restorers of the Iona Cathedral were guilty. But few who have seen the building and have studied the facts can agree with Miss Donaldson. k homely Presbyterian service, out of the tourist season, in that very modest little cathedral is one of the reviewer's most cherished memories.