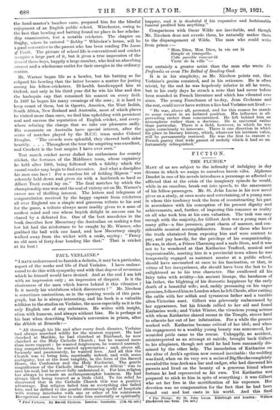 "I HAVE endeavoured to furnish a definite, it may be a particular, aspect of the works and life of Paul Verlaine. I have endeav- oured to do this with sympathy and with that degree of reverence which he himself would have desired. And at the end I am left with an impression only ; an impression of disquiet. Is it the elusiveness of the man which leaves behind it this vibration Is it merely his wistfulness which disconcerts ? " Mr. Nicolson is sometimes sententious, as in the opening words of this para- graph, but he is always interesting, and his book is a valuable addition to the studios on Verlaine, the more especially as it is the only English ono of any substance. Ho writes with insight, often with humour, and always without bias. He is perhaps at his best when describing Verlaine's conversion in prison, after the debdcle at Brussels :— " All through his life and after every fresh disaster, Verlaine had always searched wildly for the nearest support. He had clutched at Matilde, he had clutched at Rimbaud, he now clutched at the Holy Catholic Church ; but he wanted moro than mere support : he wanted forgiveness, he wanted unremit- ting comprehension, he wanted appreciation ; and, above all, furiously and passionately, he wanted love. And all this the Church was to bring him, mystically indeed, and with some ambiguity, but at the least tangibly, in the form of tho Sacred Heart, the Confession and the Holy Eucharist. The gentle magnificence of the Catholic ideal Onorme et &Heat ' was to save his soul, but he never fully understood it. For him religion has always to remain an anthropomorphic business. He had always liked being treated as a little child. To his relief he discovered that in the Catholic Church this was a positive advantage. But religion failed him as everything else failed him, and he drifted to the gentler alternating spells of hospitals with stormy interludes with one or other of his mistresses. Recognition came too late to make him materially or spiritually

happier, and it is doubtful if his expensive and fashionable funeral profited him anything."

Comparisons with Oscar Wilde are inevitable, and though Mr. Nicolson does not overdo them, he naturally makes them to the disparagement of Wilde. The man who could write from prison :— "Mon. Dieu, Mon Dieu, la vie est IA

was certainly a greater artist than the man who wrote De Profundie or even The Ballad of Beading Gaol.

It is in his simplicity, as Mr. Nicolson points out, that Vorlaine's genius consisted, and in his reticence. Ho is often trivial, by the end he was hopelessly inferior in all he wrote, but in his early days he struck a note that had never before been sounded in French literature and which has vibrated ever since. The young Frenchmen of to-day, Jean Cochrane and the rest, could never have written a lino had Verlaine not lived :—

" He was, above all, personal, and for this reason he stands to some extent in an isolated position. His influence is all. pervading rather than concentrated. Ho left behind him an atmosphere rather than a doctrine. He is universal rather than particular. There is a field, however, in which he was quite consciously to innovate. There is one direction in which his place in literary history, which, whatever his intrinsic value, will be permanently restored. He was the first to restore ti French poetry that wide gamut of melody which it had so an fortunately relinquished.'