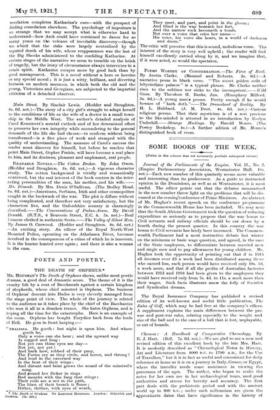 [Notice in this column does not necessarily preclude subsequerd review.1

Journal of the Parliaments of the Empire. Vol. II., No. 2. (Empire Parliamentary Association, Westminster Hall. 103. net.)—Each new number of this quarterly seems more valuable and interesting than its predecessor. As a guide to instructed opinion in the Dominions, as well as at Westminster, it is most useful. The editor points out that the debates summarized in the new number throw light on the problems that will be dis- cussed at the comineconference of Prime Ministers. An abstract of Mr. Hughes's recent speech on the conference programme in the Commonwealth House has been included. We may note that the South African Government took the question of reducing expenditure so seriously as to propose that the war bonus to Civil servants and railway officials should be cut down by a fourth during the present quarter. In this country the war bonus to Civil servants has lately been increased. The Common- wealth Parliament had a most instructive debate last winter on the minimum or basic wage question, and agreed, in the case of the State employees, to differentiate between married men and single men and to pay allowances for young children. Mr. Hughes took the opportunity of pointing out that if in 1915 all incomes over £3 a week had been distributed among those who earned less, each person would have received only 10s. 5d. a week more, and that if all the profits of Australian factories between 1913 and 1918 had been given to the employees they would have received only from 7s. 4d. to Ils, a week more than their wages. Such facts illustrate anew the folly of Socialist and Syndicalist dreams.