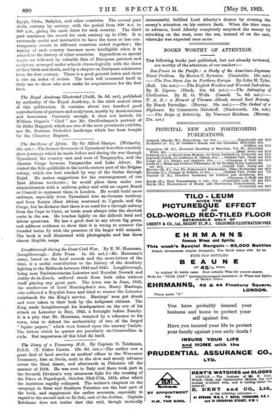 The Diary of a Yeomanry M.O. By Captain 0. Teichman,

D.S.O. (T. Fisher Unwin. 128. (Id. net.)—The author saw a great deal of hard service as medical officer to the Worcester Yeomanry, first at Suvla, next in the slow and steady advance across the Sinai desert, and afterwards in Palestine till the summer of 1918. He was sent to Italy and there took part in the Seventh Division's very strenuous fight for the crossing of the Piave at Papadopoli, October 23rd-27th, 1918, after which the Austrians rapidly collapsed. The author's chapters on the campaign in Sinai and Southern Palestine are the best part of the book, and supplement the earlier accounts, especially in regard to the second raid on Es Salt, east of the Jordan. Captain Teichman does not realize that this raid, though tactically

unsuccessful, fulfilled Lord Allenby's desires by riveting the enemy's attention on his eastern flank. When the time came to advance, Lord Allenby completely surprised the enemy by attacking on the wed, near the sea, instead of on the east, whersle was expected once more.