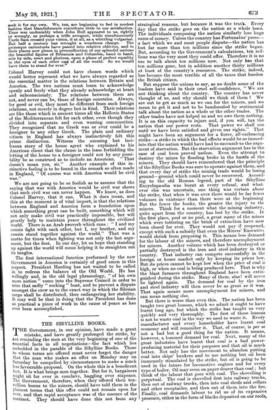 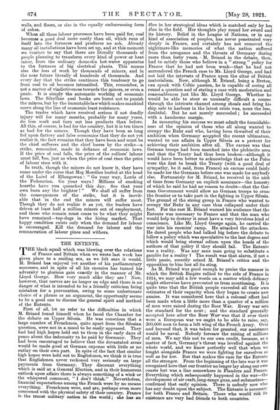 T' Government, in our opinion have made a great mistake, and have greatly prolonged the strike, by not reminding the men at the very beginning of one of the essential facts in all negotiations—the fact which lies embedded in the parable of the Sibylline Books. Those to whom terms are offered must never forget the danger that the man who makes an offer on Monday may on Saturday be compelled by circumstances to make a much less favourable proposal. On the whole this is a beneficent fact. It is what brings men together. But for it, bargainers might sit for ever in conclave haggling over sixpence. The Government, therefore, when they offered their ten- million bonus to the miners, should have told them in the Plainest terms that this offer could not remain open for ever, and that rapid acceptance was of the essence of the contract. They should have done this not from any strategical reasons, but because it was the truths. Every day that the strike goes on the nation as a whole loses. The individuals composing the nation similarly lose huge 611MB of money. Unless the country has Fortunatus' purse— a fact which we and most people dispute—the nation has lost far more than ten millions since the strike began. But, according to the Government's calculations, ten mil- lions was the very most they could offer. Therefore it is no use to talk about ten millions now. Not only has that ten millions gone, but in addition another thirty millions at least of the country's resources. The strike, indeed, has become the most terrible of all the taxes that burden the British citizen.

But suppose the unions to say, as no doubt some of the leaders have said in their cruel self-confidence, "We are not thinking about the country. The country has never thought of us, and why should we think of them We are out to get as much as we can for the miners, and we mean to get it and not to be bamboozled by sentimental talk about the nation as a whole or the other trades. The other trades have not helped us and we owe them nothing. It is on this capacity to injure and, if you will, tax the nation that our power rests. That power we shall use until we have been satisfied and given our rights." That might have been an argument for a fierce, all-embracing strike—a strike in which the bad effects would be so immed- iate that the nation would have had to succumb to the argu- ment of starvation. But the starvation argument has in the case of coal been proved useless. Even the attempt to destroy the mines by flooding broke in the hands of the miners. They should have remembered that the principle of the Sibylline Books was sure to operate against them, and that every day of strike the mining trade would be losing ground—ground which could never be recovered. Accord- ing to the old Roman legend, part of the Sibylline Encyclopaedia was burnt at every refusal, and what- ever else was uncertain, one thing was certain about the strike, that when it was over there would be far feviei volumes in existence than there were at the beginning But the fewer the books, the greater the injury to thE miners. Think for a moment what the mining industry, quite apart from the country, has lost by the strike. In the first place, pool or no pool, a great many of the mines which were tottering on the brink of extinction have now been closed for ever. They would not pay if reopened, except with such a subsidy that even the Miners' Executivt. would shrink from proposing it. This means less demand for the labour of the miners, and therefore unemployment for miners. Another volume which has been destroyed or partially destroyed is the iron and steel industry in this country. That industry can compete successfully in the foreign or home market only by keeping its prices low. But its prices cannot be kept low when the price of coal is high, or when no coal is being produced here. That is why the blast furnaces throughout England have been extin- guished during the strike. Many of them, alas! will never be lighted again. The demand for coal by the iron and steel industry will then never be as great as- it was. That again means more unemployment for miners, and can mean nothing else. But there is worse than even this. The nation has been taught two great lessons, which we admit it ought to have learnt long ago, but which the strike has taught us very quickly and very thoroughly. The first of these lessons is not to waste coal in the way we used to waste it. Every manufacturer and every householder have learnt coal economy and will remember it. That, of course, is per 8e not a bad but a good thing for the nation. It means, however, a lessened demand for coal. Next, many of the great industries have learnt that coal is a bad. power- producing material for their purposes and that oil is much better. Not only has the movement to abandon putting coal into ships' bunkers and to use nothing i but oil been immensely stimulated by the strike, but oil going to be used in the future for locomotive engines and for every type of boiler. Oil may seem on paper dearer than coal ; but think of the labour that goes with coal. The shovelling is perpetual. The coal is shovelled first into railway trucks, then out of railway trucks, then into coal sheds and cellars and other receptacles, and then out of them into the fire. Finally, coal demands labour to rid us of its expensive presence, either in the form of blacks deposited on our roofs, walls, and floors, or else in the equally embarrassing form of ashes.

When all these labour processes have been paid for, coal becomes a good deal more costly than oil, which runs of Itself into the furnaces and produces no ash. Already many oil installations have been set up, and at this moment we venture to say that there are literally thousands of people planning to transform every kind of power or heat raiser, from the ordinary domestic hot-water apparatus to the furnaces of big electrical plants. This means also the loss of work by thousands of miners, and in the near future literally of hundreds of thousands. And every day that the strike continues this tendency to go from coal to oil becomes intensified. This, remember, is not a matter of vindictiveness towards the miners, or even a panic. It is simply the automatic working of economic laws. The Sibylline coal books are burnt not to punish the miners, but by the immutablelaw which makes mankind move along the line of economic least resistance. The trades which have received serious if not deadly injury will for many months, probably for many years, do less work and turn out less products than before. All this, of course, is bad for the country, but it is ten times as bad for the miners. Though they have been so long fed upon flattery and false economics that they do not yet realize it, the fact remains that they have been and must be the chief sufferers and the chief losers by the strike—a strike, remember, made in defiance of economic laws. If the price of coal falls, the price of the colliers' labour must fall, too, just as when the price of coal rises the price of labour rises with it.

In truth, though the miners do not know it, they have come under the curse that Meg Merrilies hurled at the head of the Laird of Ellangowan : "Go your way, Lords of the Federation. Go your ways ! Millions of smoking hearths have you quenched this day. See that your own burn any the brighter ! " We shall all suffer from the consequences of the strike, but it is inevit- able that in the end the miners will suffer most. Though they do not realize it as yet, the leaders have driven at least half a million miners out of employment, and those who remain must cease to be what they might have remained—top-dogs in the hiring market. That happy condition exists only when the demand for labour is encouraged. Kill the demand for labour and the remuneration of labour pines and withers.