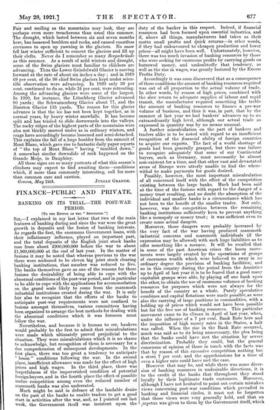 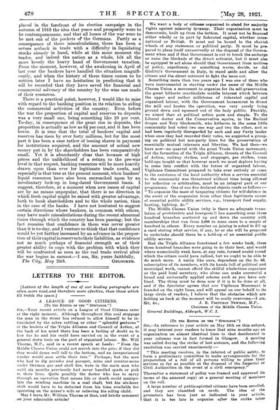 BANKING ON ITS TRIAL.—THE POST-WAR PERIOD.

explained in my last letter that two of the main features of banking during and since the war were the great growth in deposits and the fusion of banking interests. As regards the first, the enormous Government loans, with their inflationary influence, played an important part, and the total deposits of the English joint stock banks rose from about £900,000,000 before the war to about £1,960,000,000 at the end of last year. In the matter of fusions it may be noted that whereas previous to the war there were reckoned to be eleven lug joint stock clearing banking institutions, that number was reduced to five. The banks themselves gave as one of the reasons for these fusions the desirability of being able to cope with the abnormal conditions of the post-war period, and in particular to be able to cope with the applications for accommodation on the grand scale likely to come from the mammoth industrial institutions created during the war. It is only fair also to recognize that the efforts of the banks to anticipate post-war requirements were not confined to fusions amongst themselves, various committees having been organized to arrange the best methods for dealing with the abnormal conditions which it was foreseen must follow the war.

Nevertheless, and because it is human to err, bankers would probably be the first to admit that miscalculations were made which ultimately proved prejudicial to the situation. They were miscalculations which it is no shame to acknowledge, but recognition of them is necessary for a due comprehension of subsequent developments. In the first place, there was too great a tendency to anticipate " boom " conditions following the war. In the second place, insufficient allowance was made for the effect of high prices and high wages. In the third place, there was forgetfulness of the impoverished condition of potential foreign buyers, and in the fourth place the effect of possible undue competition among even the reduced number of mammoth banks was also underrated.

Much might be said in defence of the laudable desire on the part of the banks to enable traders to get a good start in activities after the war, and, as I pointed out last week, the Government itself was insistent upon the duty of the banker in this respect. Indeed, if financial resources had been focused upon essential industries, and if, above all things, manufacturers had taken as their motto small profits and ?pick returns—in other words, if they had endeavoured to* cheapen production and lower prices—all might have been well. Unfortunately, however, there was too much invasion of banking resources by those who were seeking for enormous profits by carrying goods on borrowed money, and undoubtedly that tendency, as well as the rise in wages, was greatly fostered by the Excess Profits Duty.

Accordingly it was soon discovered that as a consequence of these conditions the amount of banking resources required was out of all proportion to the actual volume of trade. In other words, by reason of high prices, combined with the slow return to adequate supplies of labour and rapid transit, the manufacturer required something like treble the amount of banking resources to finance a pre-war volume of business, and thus it was, in part, that by the summer of last year we had bankers' advances up to an extraordinarily high level, although our actual trade as expressed in quantity was by no means unusual.

A further miscalculation on the part of bankers and traders alike is to be noted with regard to an insufficient recognition of the financial ability of foreign countries to acquire our exports. The fact of a world shortage of goods had been generally grasped, but there was failure to recognize adequately that some of our Continental buyers, such as Germany, must necessarily be almost non-existent for a time, and that other vast and devastated areas of Europe were utterly unable to find the where- withal to make payments for goods desired. Possibly, however, the most important miscalculation of all concerned itself with the effect of the competition existing between the large banks. Much had been said at the time of the fusions with regard to the danger of a money trust resulting, and no doubt the absorption of the individual and smaller banks is a circumstance which has not been to the benefit of the smaller trader. Not only, however, was the competition between the remaining banking institutions sufficiently keen to prevent anything like a monopoly or money trust; it was sufficient even to create some actual dangers.

Moreover, those dangers were probably increased by the very fact of the war having produced mammoth industrial concerns and mammoth individuals (if the expression may be allowed) with such huge liabilities as to offer something like a menace. It will be recalled that in some of the past American crises the boom move- ments were largely created by the operations of groups of enormous wealth which were believed to sway in no ordinary degree the provision of banking facilities; and so in this country during, the period from the Armistice up to April of last year it is to be feared that a good many capitalist groups were able, by playing off one bank upon the other, to obtain the use of enormous volumes of banking resources for purposes which were not always for the benefit of the country as a whole. Purely speculative combines and capital flotations were made possible, as were also the carrying of large positions in commodities, with a holding up of prices which would not have been possible but for the free use of banking resources. This particular movement came to its climax in April of last year, when, under the influence of a 7 per cent. Bank Rate here and the imposition of high money rates in the States, a halt was called. When the rise in the Bank Rate occurred, much was said as to its being unnecessary, the plea being that the banks could have met the situation by severe discrimination. Probably they could, but the general consensus of opinion of those in touch with the facts was that by reason of this excessive competition nothing but a stern 7 per cent. and the apprehensions for a time of even a higher rate could have met the case. However that may be, and while there was some diver- sion of banking resources in undesirable directions, it is to the credit of the banks that throughout they stood loyally by their legitimate trade customers. Moreover, although I have not hesitated to point out certain mistaken views concerning post-war conditions which prevailed in banking and financial circles, it must not be forgotten that those views were very generally held, and that an ,mpetus was given to them by the Government itself, which placed in the forefront of its election campaign in the autumn of 1918 the idea that peace and prosper].ty were to be contemporaneous, and that all losses of the war were to be met out of the pockets or the Germans. Partly as a consequence of these miscalculations, there has been a • seSere setback in trade with a difficulty in liquidating stocks already in hand, while at this same moment the trader, and indeed the nation as a whole, felt all the more keenly the heavy hand of Government taxation. From the moment, however, of the awakening in April of last year the bankers have handled the situation magnifi- cently, and when the history of these times comes to be written later I have no hesitation in predicting that it will be recorded that they have saved the financial and commercial solvency of the country by the wise use made of their resources.

There is a practical point, however, I would like to raise with regard to the banking position in its relation to aiding the commercial activities of the country. Even before the war the proportion of capital and reserves to deposits was a very small one, being something like 10 per cent. To-day, in consequence of the great rise in deposits, the proportion is actually as low as si per cent, and it has been lower. It is true that the total of bankers' capital and reserves has risen by over forty millions, but for the most part it has been a case rather of issuing shares in payment for institutions acquired, and the amount of actual new money put in by the shareholders has been comparatively small. Yet it is abundantly clear that because of high prices and the unlikelihood of a return to the pre-war level in that respect, banking resources will be more heavily drawn upon than ever for legitimate trade needs, and especially is that true at the present moment, when bankers' liquid resources have also been encroached upon by an involuntary lock-up in long-dated Government loans. I suggest, therefore, at a moment when new issues of capital are by no means unpopular, that there is no direction in which fresh capital might be raised with greater advantage, both to bank shareholders and to the whole nation, than in the case of the banks. I have not hesitated to suggest certain directions where bankers, in common with others, may have made miscalculations during the recent abnormal times through which the country has been passing; but the fact remains that confidence in them was never greater than it is to-day, and I venture to think that that confidence would be yet further increased by an advance in the propor- tion of their capital in reserves to their liabilities, as evidence not so much perhaps of financial strength as of their greater ability to cope with the problem with which they will be confronted as soon as the real trade revival after the war begins in eariaest.—I am, Sir, yours faithfully,