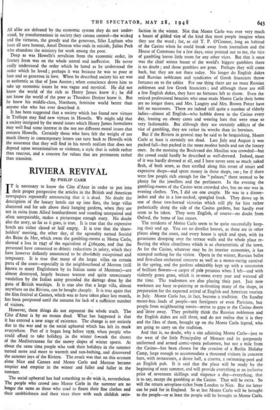 By PHILIP CARR T is necessary to know the Cote d'Azur in order to put into their proper perspective the articles in the British and American newspapers repeatedly announcing that it is dead. No doubt the description of the luxury hotels cut up into flats, the large villas shuttered and for sale above their hanging gardens, when they are not in ruins from Allied bombardment and standing unrepaired and often unrepairable, makes a picturesque enough story. No doubt also the story, so far as it goes, is true. It is true that the expensive hotels are either closed or half empty. It is true that the share- holders' meeting, the other day, of the agreeably named Societe des Bains de Mer, which owns the gambling-rooms at Monte Carlo, showed a loss in 1947 of the equivalent of £16o,000, and that the personnel have consented to drastic reductions in salary, which they have however defiantly announced to be absolutely exceptional and temporary. It is true that many of the larger villas on certain parts of the coast—especially in the neighbourhood of Menton (still known to many Englishmen by its Italian name of Mentone)—are almost destroyed, largely because wanton and quite unnecessary vandalism by the Italian army preceded the damage done by the guns of British warships. It is true also that a large villa, almost anywhere on the Riviera, can be bought cheaply. It is true again that the film festival at Cannes, which was to have taken place last month, has been postponed until the autumn for lack of a sufficient number of visitors.

However, these things do not represent the whole truth. The Cote d'Azur is by no means dead. What has happened is that it has entered a new stage of existence. The change is not entirely due to -the war and to the social upheaval which has left its mark everywhere. Part of it began long before 1939, when people who could afford to take holidays in the winter for3ook the shores of the Mediterranean for the snowy slopes of winter sports. At about the same time people who took their holidays in the summer turned more and more to warmth and sun-bathing, and discovered the summer joys of the Riviera. The result was that on this account alone Nice and Cannes and Monte Carlo and Menton became emptier and emptier in the winter and fuller and fuller in the summer.

The social upheaval has had something to do with it, nevertheless. The people who crowd into Monte Carlo in the summer are no longer the same as those who ustki to flaunt their fine clothes and their snobbishness and their vices there with such childish satis-

faction in the winter. Not that Monte Carlo was ever very much a haunt of gilded vim of the kind that most people imagine when they use the word ; for, as old T. P. O'Connor, long an habitué of the Casino when he could break away from journalism and the House of Commons for a few days, once pointed out to me, the vice of gambling leaves little room for any other vices. But that it once was the chief winter haunt of the world's biggest gamblers there is no doubt ; and those gamblers are gone. Perhaps they will come back, but they are not there today. No longer do English dukes and Russian noblemen and syndicates of Greek financiers throw fortunes on to the tables For one thing there are no more Russian noblemen and few Greek financiers ; and although there are still a few English dukes, they have no fortunes left to throw. Even the retired professional beauties who once made Monte Carlo their home are no longer there, and Mrs. Langtry and Mrs. Brown Potter have left no successors. There are indeed still quite a number of elderly ladies—almost all English—who hobble down to the Casino every day, leaning on ebony canes and wearing hats that were once so very fashionable. But although they are certainly addicts of the vice of gambling, they are rather its wrecks than its heroines.

But if the Riviera in general may be said to be languishing, Monte Carlo at least is certainly not dead. Last July and August it was packed full—but packed in the more modest hotels and not the luxury ones. In the morning the Boulevard des Moulins was crowded—but the crowd could hardly be described as well-dressed. Indeed, most of it was hardly dressed at all, and I have never seen so much naked flesh, of both sexes, as then strolled along this street of smart and expensive shops—and spent money in these shops, too ; for if there were few people rich enough for the " palaces," there seemed to be plenty for the jewellers and the perfumers. In the evening the gambling-rooms of the Casino were crowded also, but no one was in evening clothes. Yes, I did see one couple. He was in a dinner- jacket and she in a low-necked, spangled frock. They drove up in one of those two-horsed victorias which still ply for hire rather pathetically along the side of the Casino gardens, but hardly ever seem to be taken. They were English, of course—no doubt from Oxford, the home of lost causes.

The residents of Monte Carlo seem to be quite successfully keep- ing their end up. You see no derelict houses, as there are in other places along the coast, and every house is spick and span, with its geraniums drooping over the terrace walls and the whole place re- flecting the white cleanliness which is so characteristic of the town. As for the Casino, whatever may be its interior economies, it has scamped nothing for the visitor. Opera in the winter, Russian ballet and first-class orchestral concerts as well as a motor-racing carnival in the spring, and the gardens admirably kept up with a succession of brilliant flowers—a carpet of pale petunias when I left—and with violently green grass, which is re-sown every year and watered all the time. Th: tradesmen are also playing their part. Just now workmen are busy re-painting or re-fronting many of the shops, in preparation for the expected arrival of English and American tourists in July. Monte Carlo has, in fact, become a tradition. On Sunday motor-bus .loads of people—not foreigners or even Parisians, but people from neighbouring towns—arrive to gape at the Casino doors and 'drive away. They probably think the Russian noblemen and the English dukes are still there, and do not realise that it is they and the likes of them, brought up on the Monte Carlo legend, who are going to carry on the tradition.

And that is, no doubt, why a site adjoining Monte Carlo—just to the west of the little Principality of Monaco and its gorgeously uniformed and armed comic-opera policemen, but not a mile from the Casino—has been chosen for the creation of a Butlin Holiday Camp, large enough to accommodate a thousand visitors in concrete huts, with restaurants, a dance hall, a cinema, a swimming-pool and an English pub. It is said that the place will be ready by the beginning of next summer, and will provide everything at an inclusive price of seventeen shillings and sixpence a day—everything, that is to say, except the gambling at the Casino. That will be extra. So will the return aeroplane-ticket from London to Nice. But the latter can be paid for in England. So at last Monte Carlo will be brought to the people—or at least the people will be brought to Monte Carlo.