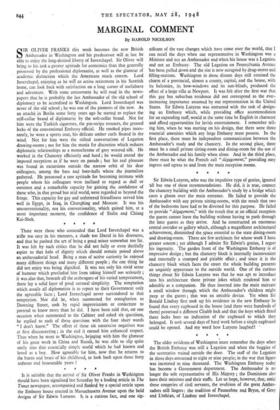 SIR OLIVER FRANKS this week becomes the new British Ambassador in Washington and his predecessor will at last be able to enjoy the long-desired liberty of Inverchapel. Sir Oliver will bring to his task a greater aptitude for economics than that generally possessed by the professional diplomatist, as well as the glamour of academic distinction which the Americans much esteem. Lord Inverchapel, enjoying as he will an active retirement in his Scottish home, can look back with satisfaction on a long career of usefulness and adventure. With some amusement he will read in the news- papers that he is probably the last Ambassador of the old school of diplomacy to be accredited to Washington. Lord Inverchapel was never of the old school ; he was one of the pioneers of the new. As an attaché_ in Berlin some forty years ago he started to replace the stiff-collar brand of diplomatist by the soft-collar brand. Not for him were the Turkish cigarettes, the pin-stripe trousers, the greased locks of the conventional Embassy official. He smoked pipes inces- santly, he wore a sports coat, his delicate amber curls floated in the wind. Not for him were the stilted conversations of Legation drawing-rooms ; not for him the mania for discretion which reduces diplomatic relationships to a monochrome of grey watered silk. He worked in the Chancery efficiently and hard ; he would attend the imposed receptions as if he were on parade ; but his real pleasure was found in excursions outside ,the narrow orbit of his dear colleagues, among the bars and beer-halls where the journalists gathered. He possessed a rare aptitude for becoming intimate with people whom his colleagues were inclined to regard as dull or common and a remarkable capacity for gaining the confidence of those who, in that proud but arid world, were regarded as beyond the fringe. This capacity for gay and unfettered friendliness served him well in Egypt, in Iraq, in Chungking and Moscow. It was his unconventionality, not his conventionality, which gained him, at a most important moment, the confidence of Stalin and Chiang Kai-Shek.

* * * * There were those who contended that Lord Inverchapel was a trifle too easy in his manners, a shade too liberal in his discourse, and that he pushed the art of being a good mixer somewhat too far. It was felt by such critics that he did not fully or even dutifully aspire to that halo of dignity which should remain poised above an ambassadorial head. Being a man of active curiosity he enjoyed many different things and many different people ; the one thing he did not enjoy was being dignified. It was not only his vivid sense of humour which precluded him from taking himself too seriously ; it was also that, beneath all the arabesques of his varied temperament, there lay a solid layer of good oatmeal simplicity. The temptation which assails all diplomatists is to report to their Government only the agreeable facts ; Lord Inverchapel never surrendered to that temptation. Nor did he, when summoned for consigtation to Downing Street, seek by rapid improvisation or conjecture to pretend to know more than he did. I have been told that, ore one occasion when summoned to the Cabinet and asked six questions, he replied to each of these questions with the four short words "I don't know," The effect of these six successive negatives was at first disconcerting ; in the end it earned him enhanced respect. Thus when he went to Washington, br41ging with him the glamour of his great work in China and Russifi, he was able to slip quite easily into that essentially simple world which he had known and loved as a boy. How agreeable for him, now that he returns to the burns and braes of his childhood, to look back upon those forty arduous and honourable years !

It is suitable that the arrival of Sir Oliver Franks in Washington should have been signalised last Saturday by a leading article in The Times newspaper, accompanied and flanked by a special article upon the Embassy house erected in Massachusetts Avenue upon the bold designs of Sir Edwin Lutyens. It is a curious fact, and one sig-

nificant of the vast changes which have come over the world, that I can recall the days when our representative in Washington was a Minister and not an Ambassador and when his house was a Legation and not an Embassy. The old Legation on Pennsylvania Avenue has been pulled down and the site is now occupied by drug-stores and filling-stations. Washington in those distant days still retained the charm of a provincial, almost a county, capital, and the house, with its balconies, its bow-windows and its sun-blinds, produced the effect of a large villa at Newport. It was felt after the first war that this gay but suburban residence did not correspond to the ever- increasing importance assumed by our representation in the United States. Sir Edwin Lutyens was entrusted with the task of design- ing an Embassy which, while providing office accommodation for an expanding staff, would at the same time be English in character and afford opportunities for lavish entertainment. I remember tell- ing him, when he was starting on his design, that there were three essential amenities which any large Embassy must possess. In the first place, there must be independent communication between the Ambassador's study and the chancery. In the second place, there must be a small private sitting-room and dining-room for the use of the Ambassador and his family when alone. And in the third place, there must be what the French call " degagement," providing easy ingress and egress to and from the main reception rooms.

Sir Edwin Lutyens, wiro was the impulsive type of genius, ignored 'all but one of these recommendations. He did, it is true, connect the chancery building with the Ambassador's study by a bridge which casts a gloom over the main entrance. He failed to provide the Ambassador with any private sitting-rooms, with the result that two of the bedrooms have had to be diverted for this purpose. He failed to provide "degagement," with the result that at an official reception the guests cannot leave the building without having to push through the later guests as they arrive. And he constructed an enormous central corridor or gallery which, although a magnificent architectural achievement, diminished the space essential to the state dining-room and drawing-room. There are few architects for whose work I have greater esteem ; yet although I admire Sir Edwin's genius, I regret his ingenuity. The garden front of the Washington Embassy is of impressive design ; but the chancery block is internally inconvenient and externally a cramped and pitiable affair ; and since it is the chancery block which faces the street the whole building presents an ungainly appearance to the outside world. One of the curious things about Sir Edwin Lutyens was that he was apt to introduce into his architecture those private jokes which rendered him so adorable as a companion. He thus inserted into the main staircase a small window through which the Ambassador's children might peep at the guests ; that was an amiable device. Yet when Sir Ronald Lindsay first took up his residence in the new Embassy he found that every cupboard in the house (and there were hundreds of them) possessed a different Chubb lock and that the keys which fitted these locks bore no indication of the cupboard to which they belonged. It took several days of hard work before a single cupboard could be opened. And my word how Lutyens laughed!

* * * * The older residents of Washington must remember the days when the British Embassy was still a Legation and when the buggies of the secretaries waited outside the door. The staff of the Legation in those days amounted to eight or nine people; in the war that figure was increased to nine thousand. The Washington Embassy today has become a Government department. The Ambassador is no longer the sole representative of His Majesty ; the Dominions also have their missions and their staffs. Let us hope, however, that, amid these congeries of civil servants, the erudition of the great Ambas- sadors still lingers: the tradition of Pauncefote and Bryce, of Grey and L'othian, of Lindsay and Inverchapel.