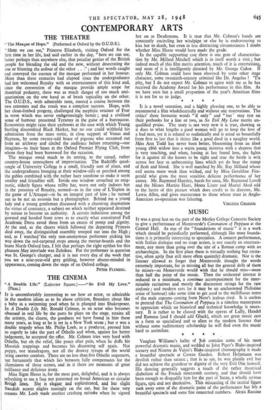 "HERE we can see," Princess Elizabeth, visiting Oxford for the first time in her life, had said earlier in the day, "here we can see, better perhaps than anywhere else that peculiar genius of the British people for blending the old and the new, without desecrating the one or blunting the ardour of the other . . ." ; and her words caught and conveyed the essence of the masque performed in her honour. More than three centuries had elapsed since the undergraduates had last welcomed Royalty with an entertainment of this kind and, since the convention of the masque provide ample scope for theatrical pedantry, there was as much danger of too much anti- quarianism on the one hand as of brash topicality on the other. The O.U.D.S., with admirable taste, steered a course between the two extremes and the result was a complete success. Hope, with her clean-limbed progeny, challenged the mephitic retainer of Fear in verse which was never embarrassingly heroic ; and a civilised sense of humour presented Tyranny in the guise of a bureaucrat. Economists might raise their eyebrows at the ease with which Young Sterling discomfited Black Market, but no one could withhold his admiration from the mass sortie, in close support of Venus and Neptune, by some twenty-odd brace of pigeons who streamed out from an archway and circled the audience before returning—one imagines—to their bases at the Oxford Premier Flying Club, from whom they had been borrowed for the occasion. The masque owed much to its setting, to the casual, rather country-house atmosphere of improvisation. The Radcliffe quad- rangle of University College is a small, friendly sort of place, and the undergraduates lounging at their window-sills or perched among the gables combined with the rather hazy sunshine to make it seem smaller and friendlier still. Inside one window crouched an enig- matic, elderly figure whose trilby hat, worn not only indoors but in the presence of Royalty, seemed—as in the case of L'Espion in the game of L'Attaque—to be an integral part of him ; he turned out to be not an assassin but a photographer. Behind me a young lady and a young gentleman discussed with a charming dogmatism the virtue of constancy, a subject on which neither appeared destined by nature to become an authority. A certain indecision among the gowned and hooded front rows as to exactly what constituted Full Academic Dress saved them from an excess of pomp and dignity. At the end, as the cheers which followed the departing Princess died away, the distinguished assembly trooped out into the High • and, as I watcheerthe only non-anonymous performer picking his way down the red-carpeted „steps among the mortar-boards and the brave North Oxford hats, I felt that perhaps the right epithet for this pleasant May interlude was Zuleikan. For the performer in question was St. George's charger, and it is not every day., of the week that you see a nine-year-old grey gelding, however absent-minded in appearance, coming down the steps of an Oxford college.