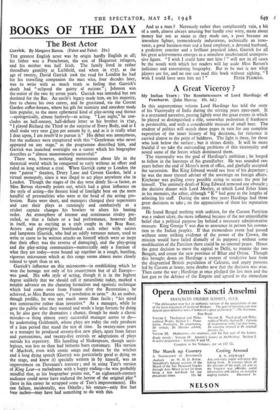 THE greatest English actor was by origin hardly English at all; his father was a Frenchman, the son of Huguenot refugees, and his mother was half Irish. The family lived in rather threadbare gentility at Lichfield, and when in 1737, at the age of twenty, David Garrick took the road for London he had for his travelling companion the man who, four decades later, was to write with as much truth as feeling that Garrick's death had "eclipsed the" gaiety of nations " ; Johnson was the senior of the two by seven years. Garrick was intended but not destined for the Bar. An uncle's legacy made him, on his majority, free to choose his own career, and he gravitated, via the Covent Garden coffee-houses, where his gift for mimicry and anecdote made him popular, to the more ephemeral kind of play-acting and thence —apologetically, almost furtively—to acting. "Last night," he con- cludes an half-uneasy, half-defiant letter to his brother in 1741, "I played Richard the Third to the surprise of Every Body, and as I shall make very near L300 per annum by it, and as it is really what I doat upon, I am resolv'd to pursue it." His debut was 'anonymous, but the audience were enraptured with this "Gentleman who never appeared on any stage," as the programme described him, and Garrick was launched overnight on a career which his biographer describes as "almost monotonously successful."

There was, however, nothing monotonous about life in the theatrical world which he conquered so early without an effort and ruled so long without a rival. When Garrick came to London the two " patent " theatres, Drury Lane and Covent Garden, held a virtual monopoly, since it was illegal to act plays anywhere else in London. Though the stages of the day were dimly lit=a factor, as Miss Barton shrewdly points out, which had a great influence on the style of acting—the fiercest kind of limelight beat on the mere handful of personalities who were at the head of the acting pro- fession. Runs were short, and managers changed their repertoires and cast their plays as cunningly and combatively as a cricket captain changes his bowlers or alters his batting order. An atmosphere of intense and continuous rivalry pre- vailed, so that a failure or a bad performance, however dull in itself, was as exciting as a crab caught in the Boat Race. Actors and playwrights bombarded each other with satires and lampoons (Garrick, who had an oddly tortuous nature, used to write or cause to be written attacks on himself which were so inept that their effect was the reverse of damaging), and the play-going and the play-acting communities—numerically only a fraction of what they are today—were bound up together in a rough, bustling, vigorous microcosm which at this range seems almost more closely related to sport than to art.

Garrick's influence on this microcosm—in establishing which he won the homage not only of his countrymen but of all Europe— was good. His on style of acting, though it is in the highest degree unlikely that we should call it naturalistic today, marked a notable advance on the chanting formalism and egotistic technique which had come over from France after the Restoration ; he achieved, as Miss Barton says, "a revolution in taste." As an author, though prolific, he was not much more than facile ; "his mind was constructive rather than inventive." As a manager, while he gave the public what they wanted and made a large fortune by doing so, he also gave the dramatists a chance, though he made a classic mistake—a thing almost every successful manager seems to do— by underrating Goldsmith, whose plays are today the only products of a lean period that stand the test of time. In twenty-nine years as a manager he produced seventy-five new plays, apart from farces and pantomimes, and twenty-five revivals or adaptations of plays outside his repertory. His handling of Shakespeare, though sacri- legious, was less so than had hitherto been customary. His version of Macbeth, even with comic songs and dances by the witches and a long dying speech (Garrick was particularly good at dying on the stage, and knew it) specially written in by himself, was an improvement on Davenant's travesty ; and in using Tate's version of King Lear—a melodrama with a happy ending—he was probably mindful that, as his biographer points out, "an eighteenth-century audience could never have endured the horror of the original play" (later in his. career he scrapped some of Tate's improvements). His one failure, incidentally, was Othello ; his stature—only five feet four inches—may have had something to do with this. And as a man ? Nervously rather than complacently vain, a bit of a snob, almost always amusing but hardly ever witty, mein about money but not as mean as they made out, a poor because an irresolute fighter, tremendously industrious, technically an inno- vator, a good business-man and a hard employer, a devoted husband, a proficient courtier and a brilliant practical joker, Garrick for all his great achievements emerges as a somehow insubstantial unimpres- sive figure. "I wish I could have met him " will not in all cases be the words with which her readers will lay aside Miss Barton's judicious and entertaining biography. But to be met is not wha.t players are for, and no one can read this book without sighing, "I wish I could have seen him act I " PETER FLEMING.