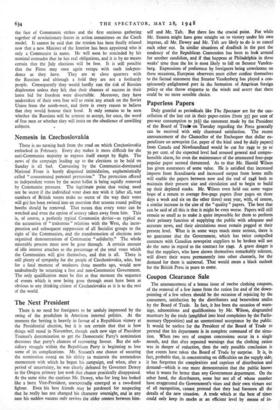 Duly grateful as periodicals like The Spectator are for the can- cellation of the last cut in their paper-ration (from 351 per cent of pre-war consumption to 311) the statement made by the President of the Board of Trade on Tuesday regarding the Press generally can be received with only chastened satisfaction. The recent announcement of the Chancellor of the Exchequer that dollar ex- penditure on newsprint (i.e. paper of the kind used by daily papers) from Canada and Newfoundland would be cut for 1949 to so or 30 per cent, of the expected level had aroused general and compre- hensible alarm, for even the maintenance of the attenuated four-page popular paper seemed threatened. As to that Mr. Harold Wilson has given assurances of some value. He is satisfied that increased imports from Scandinavia and increased output from home mills will enable the papers between now and the end of t948 both to maintain their present size and circulation and to begin to build up their depleted stocks. Mr. Wilson even held out some vague hope of a return to average five-page papers (four pages on three days a week and six on the other three) next year, with, of course, a similar increase in the size of the " quality " papers. The best that can be said of all this is that it might be even worse. Papers will still remain so small as to make it quite impossible for them to perform their primary function of supplying the public with adequate and accurate news, and their circulations must remain pegged at their present level. What is in some ways much more serious, there is no guarantee that the Government, which has twice compelled contracts with Canadian newsprint suppliers to be broken will not do the same in regard to the contract for 1949. A grave danger is that the suppliers, who have shown themselves remarkably tolerant, will divert their wares permanently into other channels, for the demand for them is universal. That would mean a black outlook for the British Press in years to come.