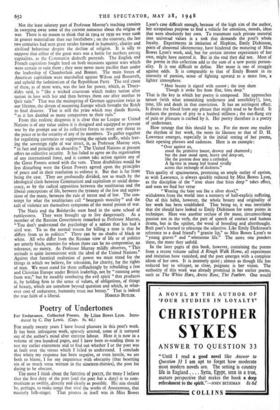 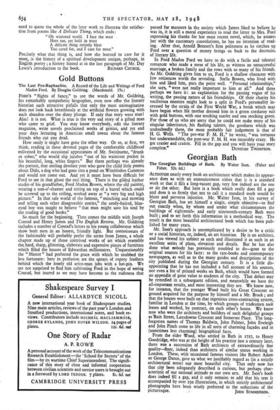 FOR nearly twenty years I have found pleasure in this poet's work. It has been infrequent work, sparsely uttered, some of it tortured out of the author's mind after extreme labour. Here it is now in a volume of two hundred pages, and I have been re-reading them to test my earlier enjoyment and to find out whether I or the poet was at fault over the verses which I failed to understand. I conclude that where my response has been negative' or even hostile, we are both to blame, I for my impatience with obscurity (that besetting sin of so much verse written in the nineteen-thirties), the poet for daring to be obscure.

The more I think about the function of poetry, the more I believe that the first duty of the poet (and the poet has a duty) is to com- municate as swiftly, directly and clearly as possible. His aim should be, perhaps, to make songs that rival the works of Anonymous that masterly folk-singer. That process in itself was in Miss Bowes

Lyon's case difficult enough, because of the high aim of the author, her scrupulous purpose to find a vehicle for emotions, moods, ideas that were absolutely her own. To transmute such private material into universal values is a task that demands the ,poet's whole loyalty. Experiments in imitation of Hopkins Emily Dickinson, poets of abnormal idiosyncrasy, have hindered the maturing of Miss

Bowes Lyon's work, and, but for certain intense experiences of her own, might have marred it. But in the end they did not. Most of the poems in this collection add to the sum of a new poetic person- ality. It is one difficult to define. Her muse is one of struggle against odds. It is comparable to that of Emily Brontë in its intensity of passion, sense of fighting upward to a more free, a lighter atmosphere.

"Most beauty is signed with sorrow ; the iron share Though it strike fire from flint, bites deep."

That is the key in which her poetry is composed. She approaches nature (with what astonishing tenderness and sensibility!), love, time, life and death in that conviction. It has an astringent effect. It drains the blood from any phrase that might tend to be florid. It reduces the gesture of pity to a hushed stillness the out-flung cry of pain or pleasure is curbed by it. Her poetry therefore is a poetry of undertones.

How strange that this should be so. For the more one studies the rhythm of her work, the more its likeness to that of D. H. Lawrence emerges, especially in the initial setting of her poems, their opening phrases and cadences. Here is an example: "Over against us, stood the primitive house, drowsy and shuttered ; but the door stood open, heavy and deep-set, like the postern door into a cathedral. A fig-tree in young leaf leaned vividly across that rectangle of darkness."

This quality of spaciousness, promising an ample outlay of egoism, as with Lawrence, is always quickly reduced by Miss Bowes Lyon, as the discipline of the "iron share that bites deep" takes effect, and soon we find her verse "Wearing the faint sun like a silver shawl," withdrawn from the world into a nunnery of half-explicit suffering. Out of this habit, however, the whole beauty and originality of her work has been established. That being so, it was inevitable that she should have looked to Emily Dickinson for some points in technique. Here was another recluse of the muse, circumscribing passion not in the verb, the part of speech of contact and human drama, but in the epithet, the word of brooding and afterthought. Both poet's learned to telescope the adjective. Like Emily Dickinson's reference to a dead friend's "granite lip," so Miss Bowes Lyon's to "young graves" and "whetstone life." The more one ponders these, the more they unfold.

In the later pages of this book, however, containing the poems from a recent volume called A Rough Walk Home, all experiment and imitation have vanished, and the poet emerges with a complete idiom of her own. It is intensely quiet ; almost as though life has reduced her to whisper, so close, poignant is her vision. The authority of this work was already promised in her earlier poems, such as The White Hare, Arctic Rose, The Feather. One would

tion from poems like A Delicate Thing, which ends:

Here too, yet hold in trust A delicate thing entirely blest

You cared for, and I care for most."

Precisely what that thing is, and how she learned to care for it most, is the history of a spiritual development unique, perhaps, in English poetry ; a history hinted at in the last paragraph of Mr. Day