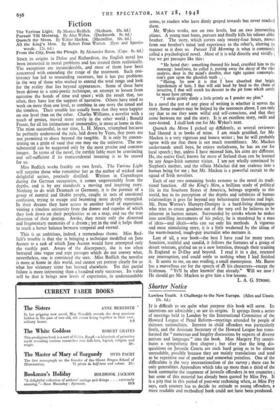 SINCE its origins in Defoe and Richardson, the English novel has been interested in moral problems and has treated them realistically. The exceptions are inconsiderable, and most of them have been ,concerned with extending the range of the treatment. Such con- sistency has led to resounding successes, but it has put problems in the way of those who wished to extend the total range and look for the reality that lies beyond appearances. Some of these have been driven to a semi-poetic technique, an attempt to loosen from narrative the bonds of time and space ; with the result that, too often, they have lost the support of 'narrative. Others have tried to work on more than one level, to combine in one story the timed and the timeless. Their trouble has usually been that they were happier on one level than on the other. Charles Williams, a novelist with a touch of genius, moved more surely in the other world ; Ronald Fraser, for all his intimations of immortality, is more at home in this. The Most successful, in our time L. H. Myers, triumphed because

he perfectly understood the rule, laid down by Yeats, that poets are not permitted to shoot beyond the tangible. It is only by concen- trating on a grain of sand that one may see the universe. The un- substantial can be suggested only by the most precise and concrete images. In terms of the novel, the earthly fable must be convincing and self-sufficient if its transcendental meaning is to be snared for us.

Miss Redlich works frankly on two levels. The Various Light will surprise those who remember her as the author of wicked and delightful satires, precisely distilled. Written in Copenhagen during the German occupation, it comes ungovernably from the depths, and is by any standards a moving and inspiring story. Nothing to do with Denmark or Germany, it is the portrait of a group of normal and likable people, caught in nets of emotional confusion, trying to escape and becoming more deeply entangled. In their dreams they have access to another level of experience, visiting a timeless university from the domes and cupolas of which they look down on their perplexities as on a map, and see the true direction of their destiny. Awake, they retain only the distorted and fragmentary memories of 'a dream ; yet in the end it helps them to reach a better balance between temporal and eternal.

This is an ambitious, indeed, a tremendous theme. Miss Red- lich's trouble is that she is bringing a technique modelled on Jane Austen to a task of which Jane Austen would have attempted only the earthly part. Aware of the discrepancy, she is too often betrayed into vague and rapt passages which do not convey what, nevertheless, one is convinced she sees. Miss Redlich the novelist is more at home in this world, and cannot yet portray clearly for us what her visionary sister has learned elsewhere. Yet this partial failure is more interesting than a hundred early successes. Its value will be that it brings new levels of experience, in understandable terms, to readers who have dimly groped towards but never reached them.

Mr. Wykes works, not on two levels, but on two intersecting planes. A young man hates pursues and finally kills his odious elder brother. The story, which covers only twenty-four hours, moves from one brother's mind and experience to the other's, altering its manner as it does so. Pursuit Till Morning is what is commonly called a psychological novel. Most of it is told directly and vividly ; but we get passages like this :

"He hated that: something thorned his head, crucified him to the morning: loneliness, he called it, putting away the decay of the viler analysis, deep in the mind's dustbin, shut tight against contempla- tioh's gaze upon the ghoulish truth . . . "Hating. So now it is that I have absorbed that bright legerdemain of hate I that will add bead by bead to the chain of invective, I that will watch his descentto the pit from which surely he must have sprung. "I smile grimly dimly a little primly as I ponder my plan."

In a novel the test of any piece of writing is whether it serves the story. Some readers may be helped by the sentences above. I can only say that to me they seem wilful and self-conscious, and that they come between me and the story. It is an excellent story, swift and sure-footed. I shall look out for Mr. Wykes's next.

Quench the Moon I picked up diffidently, as several reviewers

had likened it to books of mine. I am much gratified, for Mr. Mackenis a very vigorous and honest writer ; but he will probably 'agree with me that there is not much resemblance. Mr. Macken understands small boys, he enjoys melodrama he has an ear for local speech ; but, unless I have misread him, his aims are different. He, the native Gael, knows far more of Ireland than can be learned by any Ango-Irish summer visitor. I 'am not wholly convinced by Stephen's mother, and the villain Malachai did not coalesce into a human being for me ; but Mr. Macken is a powerful recruit to the squad of Irish novelists.

tional function. All the King's Men, a brilliant study of political life in the Southern States of America belongs urgently to this world, but in its perception of the depths and subtleties of human relationships it goes far beyond any behaviourist theories and logic. Mr. Penn Warren's Humpty-Dumpty is a hard-living demagogue who tries to create goodness out of the very evil he believes to be inherent in human nature. Surrounded by crooks whom he makes into unwilling instruments of his policy, he is murdered by a man of ideas—and ideals—who can see only his methods. A vigorous and most stimulating story, it is a• little weakened by the idiom of the warm-hearted, tough-guy journalist who narrates it.

Last of 'all, a war book—the best I have read for many years. Sensitive, truthful and candid, it follows the fortunes of a group of desert veterans, grafted on to a new battalion, through their training ih England to D-Day and beyond. I read it in a day, resented any interruption, and could settle to nothing when I had finished it. It seems to me, on one reading, a small masterpiece. Mr. Baron has a marvellous ear for the speech of all his characters except the Irishman. " be after knowin' that already." Will we now ? He should get Mr. Macken to give him a few lessons.