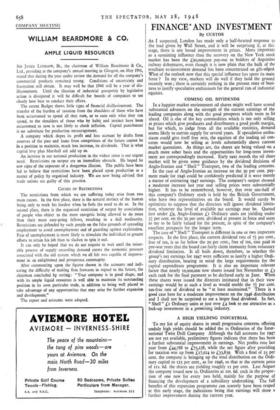 As I suspected, London has made only a half-hearted response to the lead given by Wall Street, and it will be surprising if, at this stage, there is any broad improvement in prices. More important as a sustaining influence than the recovery on the New York stock market has been the £9o,00o,000 pay-out to holders of Argentine railway debentures, even though it is now plain that the bulk of the resultant re-investment demand has been concentrated on gilt-edged. What of the outlook now that this special influence has spent its main force ? In my view, markets will do well if they hold the ground recently won ; there is certainly nothing in the present state of busi- ness to justify speculative enthusiasm for the general run of industrial equities.

COMING OIL DIVIDENDS In a happier market environment oil shares might well have scored substantial advances on the strength of the current earnings of the leading companies along with the good prospects which seem to lie ahead. Oil is obe of the key commodities which is not only selling at prices which give producers and distributors a good profit margin, but for which, to judge from all the available statistics, demand seems likely to outrun supply for several years. If speculative enthu- siasm could give itself free rein, the equities of the leading oil con- cerns would now be selling at levels substantially above current market quotations. As things are, the shares are being valued on a much more sober basis and the opportunities for long-term invest- ment are correspondingly increased. Early next month the oil share market will be given some guidance by the dividend decisions of Anglo-Iranian and " Shell " Transport, two of the leading concerns.

In the case of Anglo-Iranian an increase on the 30 per cent, pay-

ment made for 1946 could be confidently predicted if it were merely a matter of estimating 1947 earnings. The company's output showed a moderate increase last year and selling prices were substantially higher. It has to be remembered, however, that over one-half of this company's Ordinary stock is held by the British Government, who have two representatives on the board. It would surely be optimistic to suppose that the directors will ignore dividend limita- tion, whatever the level of available net earnings may be. Quoted just under £9, Anglo-Iranian LI Ordinary units are yielding under 31 per cent. on the 30 per cent. dividend at present in force and seem to me to be fairly valued for the present, in spite of the company's excellent prospects for the longer term.

respects. In the first place, the current dividend rate of 71- per cent., free of tax, is so far below the 20 per cent., free of tax, rate paid in pre-war years that the board can fairly claim immunity from voluntary dividend limitation. It all boils down, therefore, to whether the group's net earnings for 1947 were sufficient to justify a higher Ordi- nary distribution, bearing in mind the large requirements for the capital expenditure programme. It is also an important relevent factor that nearly to,000,000 new shares issued last November at £3 each rank for the final payment to be declared early in June. When these shares were issued the directors intimated that in their view earnings would be at such a level as would enable the 7+ per cent. tax-free rate of dividend to be "at least maintained." There is a good case here for a moderate improvement on the 1946 distribution and I shall not be surprised to see a larger final dividend. In fact, " Shell " LI Ordinary units at just over £4 look to me attractive as a lock-up investment in a promising industry.

To my list of equity shares in small progressive concerns offering unduly high yields should be added the Is Ordinaries of the Inter- national Twist Drill Company Although the full accounts for 1947 are not yet available, preliminary figures indicate that there has been a further substantial improvement in earnings. Net profits rose last year from £44,788 to £75,238, while the net figure after providing for taxation was up from £17024 to £33,839. With a final of 25 per cent. the company is bringing up the total distribution on the Ordi- nary capital to 125 per cent., as for 1946, so that at the current price of us. 6d. the shares are yielding roughly ii per cent. Last August the company issued new is. Ordinaries at los. 6d. each in the propor- tion of one new for every two held, mainly for the purpose of financing the development of a subsidiary undertaking. The full benefits of this expansion programme can scarcely have been reaped at this early stage, the indications being that earnings will show a further improvement during the current year.