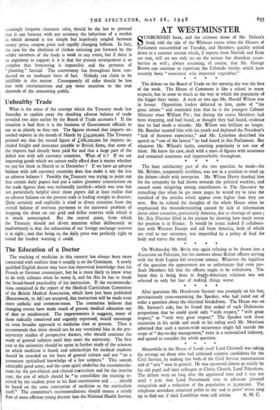 The Education of a Doctor

The teaching of medicine in this country has always been more concerned with realities than it usually is on the Continent. A newly qualified English doctor may have less theoretical knowledge than his French or German counterpart, but he is more likely to know what to do with sickness when he meets it, and for this he has to thank the broad-based practicality of his instruction. If the recommenda- tions contained in the report of the Medical Curriculum Committee of the British Medical Association, which have just been published (Butterworth, 75. 6d.) are accepted, this instruction will be made even more catholic and common-sense. The committee believes that changing events have made much of present medical education out of date or misdirected. The improvements it suggests, many of them radically conceived and cogently expressed, would encourage an even broader approach to medicine than at present. Thus it recommends that there should not be any vocational bias in the pre- university studies of prospective doctors, who should continue the study of general subjects until they enter the university. The first year at the university should be spent in further study of the sciences on which medicine is based, and scholarships for medical students should be awarded on the basis of general culture and not "on a premature spetialised knowledge of a few subjects." This sounds admirable good sense, and the same spirit underlies the recommenda- tions for the pre-clinical and clinical curriculum and for the interim year, the aim of which should be "to consolidate the training re- ceived by the student prior to his final examination and . . . should be based on the same conception of medicine as the curriculum itself." The committee's recommendations should ensure a steady flow of more efficient young doctors into the National Health Service.