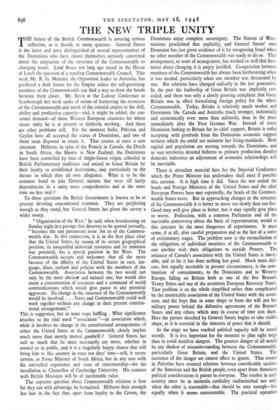 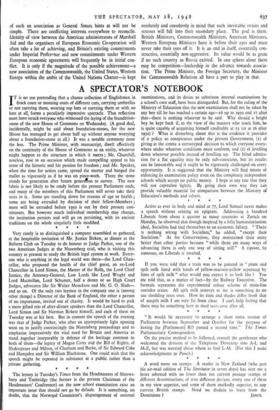 THE future of the British Commonwealth is arousing serious reflection, as it should, in many quarters. General Smuts is the latest and most distinguished of several representatives of the Dominions who have shown themselves seriously concerned about the adaptation of the structure of the Commonwealth to changing needs. Lord Bruce not long ago raised in the House of Lords the question of a standing Commonwealth Council. This week Mr. R. G. Menzies, the Opposition leader in Australia, has predicted a dark future for the Empire unless the self-governing members of the Commonwealth can find a way to draw the bonds between them closer. Mr. Bevin at the Labour Conference at Scarborough last week spoke of means of harnessing the resources of the Commonwealth and much of the colonial empire to the skill, ability and productive capacity—and, it might be added, the con- sumer demand--of those Western European countries for whose closer unity he is at present so tirelessly working. And there are other problems still. For the moment India, Pakistan and Ceylon have all accepted the status of Dorninions, and two of them seem disposed to retain it. That creates at once a new situation. Hitherto, in spite of the French in Canada, the Dutch in South Africa, the Maoris in New Zealand, the Dominions have been controlled by men of Anglo-Saxon origin, schooled in British Parliamentary traditions and united to Great Britain by their loyalty to established institutions,- and particularly to the throne to which they all own allegiance. What is to be the common bond to join Oriental nations that were till lately dependencies in a unity more comprehensive and at the same time no less real ?

To those questions the British Government is known to be at present devoting concentrated attention. They are perplexing enough as they stand, but General Smuts has given the survey a wider sweep.

"Organisation of the West," he said, when broadcasting on Sunday night in a passage that deserves to be quoted textually, "becomes the one paramount issue for us of the Common- wealth also. In this connection, it is in the first place clear that the United States, by reason of its secure geographical position, its unequalled industrial resources and its immense war potential, has a special position in the West. The Commonwealth accepts and welcomes that all the more because of the affinity of the United States in race, lan- guage, ideas, outlook and policies with the members of the Commonwealth. Association between the two would not only be the most obvious and natural one, but would also mean a concentration of resources and a command of world communications which would give pause to any potential aggressor. No change in the structure of the Commonwealth would be involved. . . . States and Commonwealth could well work together without any change in their present constitu- tional arrangements."

This is suggestive, but in some ways baffling . What significance attaches to the vital word "association "—an association which, while it involves no change in the constitutional arrangements of either the United States or the Commonwealth, clearly implies much more than merely mutual goodwill ? General Smuts has said so much that he must necessarily say more, whether in council or in public, and it is a singularly happy chance that will bring him to this country in some ten days' time—still, it seems certain, as Prime Minister of South Africa, but in any case with his unrivalled experience and store of statesmanship—for his installation as Chancellor of Cambridge University. His contacts with British Ministers will be of inestimable value.

The supreme question about Commonwealth relations is how far they can with advantage be formalised. Hitherto their strength has lain in the fact that, apart from loyalty to the Crown, the Dominions enjoy complete sovereignty. The Statute of West- minister proclaimed that explicitly, and General Smuts' own Dominion has just given evidence of it by recognising Israel when, no other member of the Commonwealth was ready to do so. That arrangement, or want of arrangement, has worked so well that hesi- tation about changing it is amply justified. Co-operation between members of the Commonwealth has always been forthcoming when it was needed, particularly when one member was threatened by war. But relations have changed radically in the last generation. In the past the leadership of Great Britain was implicitly con- ceded, and there was only a slowly growing complaint that Great Britain was in effect formulating foreign policy for the whole Commonwealth. Today, Britain is relatively much weaker and Dominions like Canada and Australia much stronger, industrially and economically even more than militarily, than in the years immediately after the First German War. Instead of every Dominion looking to Britain for its chief support, Britain is today accepting with gratitude from the Dominions economic support without which she could not maintain her living-standards. Both capital and population are moving towards the Dominions, and as vast territories devoted hitherto to primary production develop domestic industries an adjustment of economic relationships will be inevitable.

There is abundant material here for the Imperial Conference which the Prime Minister has undertaken shall meet if possible this autumn. It is high time it did. Since the war ended the heads and Foreign Ministers of the United States and the chief European Powers have met repeatedly, the heads of the Common- wealth States never. But in approaching changes in the structure of the Commonwealth it is better to move too slowly than too fast. Good may well give place to better, but it may equally give place to worse. Federation, with a common Parliament and all the inevitable controversy about the basis of representation, would at this juncture be the most dangerous of experiments. It must come, if at all, after careful preparation and as the last of a series of evolutionary stages. The problem now is the reconciliation of the obligations of individual members of the Commonwealth to one another with their obligations to outside Powers. The intimacy of Canada's association with the United States is inevit- able, and so far it has done nothing but good. Much more deli- cate, but equally inevitable in present circumstances, is the com- bination of commitments, to the Dominions and to Western Europe, falling on Britain both as one of the five Brussels Treaty States and one of the seventeen European Recovery States. That problem is on the whole simplified rather than complicated by the inextricable association of the United States with the seven- teen, and the hope that in some shape or form she will put her military power behind the defensive agreements of the Brussels States and any others which may in course of time join them. Here the picture sketched by General Smuts begins to take visible shape, as it is essential in the interests of peace that it should.

At the stage we have reached political sagacity will be tested sternly. It is less important for the moment to plan right steps than to avoid manifest dangers. The greatest danger of all would be any shadow of misunderstanding between the Commonwealth, particularly Great Britain, and the United States. The existence of the danger we cannot affect to ignore. That events in Palestine have strained relations between considerable sections of the American and the British people, even apart from American political considerations is patent to everyone. The resolve in each country must be to maintain cordiality undiminished not only when the other is reasonable—that should be easy enough—but equally when it seems unreasonable. The practical operation of such an association as General Smuts hints at will not be simple. There are conflicting interests everywhere to reconcile. Identity of view between the American Administrators of Marshall Aid and the organisers of European Economic Co-operation will often take a lot of achieving, and Britain's existing commitments under Imperial Preference and new commitments under Western European economic agreements will frequently be in initial con- flict It is only if the magnitude of the possible achievement—a new association of the Commonwealth, the United States, Western Europe within the ambit of the United Nations Charter—is kept resolutely and ceaselessly in mind that such inevitable strains and stresses will fall into their secondary place. The goal is there. British Ministers, Commonwealth Ministers, American Ministers, Western European Ministers have it before their eyes and must never take their eyes off it. It is an end in itself, essentially con- structive, essentially non-aggressive. Its value would be as great if no such country as Russia existed. In one sphere alone there may be competition—leadership in the advance towards associa- tion. The Prime Minister, the Foreign Secretary, the Minister for Commonwealth Relations all have a part to play in that.