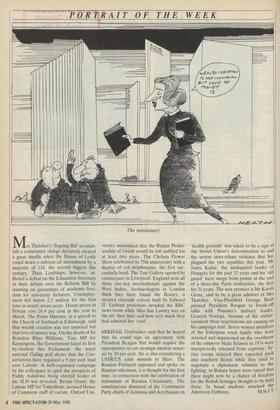 The missionary Mrs Thatcher's 'flagship Bill' to estab- lish a community charge decisively cleared a great hurdle when the House of Lords voted down a substantial amendment by a majority of 134, the second biggest this century. Their Lordships, however, in- flicted a defeat on the Education Secretary in their debate over his Reform Bill by insisting on guarantees of academic free- dom for university lecturers. Unemploy- ment fell below 2.5 million for the first time in nearly seven years. House prices in Britain rose 26.4 per cent in the year to March. The Prime Minister, in a speech to the Church of Scotland in Edinburgh, said that wealth creation was not immoral but that love of money was. On the death of Sir Brandon Rhys Williams, Tory MP for Kensington, the Government faced its first by-election this Parliament: the latest national Gallup poll shows that the Con- servatives have regained a 9 per cent lead over Labour. A well-organised campaign by his colleagues to spoil the prospects of Paddy Ashdown being elected leader of the SLD was revealed. Bernie Grant, the Labour MP for Tottenham, accused House of Commons staff of racism. Oxford Uni-

versity announced that the Regius Profes- sorship of Greek would be left unfilled for at least two years. The Chelsea Flower Show celebrated its 75th anniversary with a display of red delphiniums, the first suc- cessfully bred. The Tate Gallery opened its counterpart in Liverpool. England won all three one-day internationals against the West Indies. Archaeologists in London think they have found the Rosary, a moated riverside retreat built by Edward H. Lesbian protesters invaded the BBC news room while Miss Sue Lawley was on the air: they later said how very much they had admired her 'cool'.

MIKHAIL Gorbachev said that he hoped that he could sign an agreement with President Reagan that would require the superpowers to cut strategic nuclear arsen- als by 50 per cent. He is also considering a USSR/US joint mission to Mars. The Russian Patriarch appeared and spoke on Russian television, it is thought for the first time, in connection with the celebration of milennium of Russian Christianity. The simultaneous dismissal of the Communist Party chiefs of Armenia and Azerbaijan on

'health grounds' was taken to be a sign of the Soviet Union's determination to end the severe inter-ethnic violence that has plagued the two republics this year. Mr Janos Kadar, the undisputed leader of Hungary for the past 32 years and his 'old guard', were swept from power at the end of a three-day Party conference, the first for 31 years. The new premier is Mr Karoli Grosz, said to be a great admirer of Mrs Thatcher. Vice-President George Bush pressed President Reagan to break-off talks with Panama's military leader, General Noriega, because of the embar- rassment these negotiations are causing on his campaign trail. Seven women members of the Ethiopian royal family who were arrested and imprisoned on the overthrow of the emperor Haile Selassie in 1974 were unexpectedly released from captivity. Sy- rian troops delayed their expected push into southern Beirut while they tried to negotiate a diplomatic solution to the fighting: in Britain hopes were raised that there might now be a chance of freedom for the British hostages thought to be held there. In Seoul students attacked the