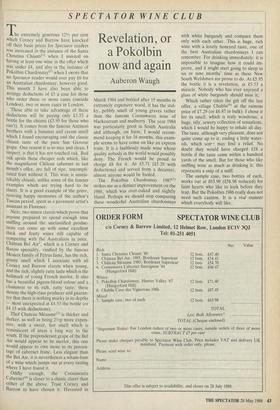 Revelation, or a Pokolbin now and again

The extremely generous 121/2 per cent which Corney and Barrow have knocked off their basic prices for Spectator readers was increased in the instance of the Santa Christina Chianti(1) when I insisted on having at least one wine in the offer which was under £4, and also in the instance of Pokolbin Chardonnay(5) when I swore that no Spectator reader would ever pay £6 for an Australian chardonnay, however good. This month I have also been able to arrange deductions of £5 a case for those who order three or more cases (outside London), two or more cases in London.

Those able to take advantage of these deductions will be paying only £3.53 a bottle for the chianti (£3.95 for those who can't). It comes from the famous Antinori brothers with a bananas and cream smell which I found encouraging and the classic chianti taste of the pure San Giovese grape. One reason it is so nice and clean, I suspect, is that it has not touched oak. Bad oak spoils these cheaper reds which, like the magnificent Chilean cabernet in last month's offer, are full of ripe, uncompli- cated fruit without it. This wine is unmis- takably chianti, unlike some of the fancier examples which are trying hard to be claret. It is a good example of the genre, reviving happy memories of the author's Tuscan period, spent as a pavement artist's assistant in Florence.

Next, two minor clarets which prove that anyone prepared to spend enough time sniffing around the unclassified produc- tions can come up with some excellent thick and fruity wines still capable of competing with the Australians in price. Château Bel Aire, which is a Corney and Barow speciality, vinified by the famous Moueix family of Petrus fame, has the rich, grassy smell which I associate with all Corney and Barrow clarets when young, and the rich, slightly ratty taste which is the hallmark of young French merlot. It also has a beautiful pigeon-blood colour and a cleaniness to its rich, ratty taste; these denote the high-class producer and guaran- tee that there is nothing murky in its depths — most unexpected at £4.53 the bottle (or £4.15 with deductions). Thef Chateau Meaume(3) is thicker and darker, as well as being 21/2p more expen- sive, with a sweet, hot smell which is reminiscent of areas a long way to the south. If the preponderant grape of the Bel Air would appear to be merlot, this one would appear to owe more to its percen- tage of cabernet franc. Less elegant than the Bel Air, it is nevertheless a wham-barn of a wine which jumps out at every tasting where I have found it.

Oddly enough, the Coonawarra Cabernet(4) is closer to a classic claret than either of the above. Trust Corney and Barrow to have chosen it. Havested in

March 1984 and bottled after 15 months in extremely expensive wood, it has the stal- ky, pebbly smell of young graves rather than the famous Coonawarra nose of blackcurrant and mulberry. The year 1984 was particularly good in South Australia and although, on form, I would recom- mend keeping it for 18 months, this exam- ple seems to have come on like an express train. It is a faultlessly made wine whose quality nobody in the world would possibly deny. The French would be proud to charge £8 for it. At £5.71 (£5.29 with deductions) and served from a decanter, almost anyone would be fooled.

The Pokolbin Chardonnay 1987(5) strikes me as a distinct improvement on the 1986, which was over-oaked and slightly bland. Perhaps we should stop comparing these wonderful Australian chardonnays

with white burgundy and compare them only with each other. This is huge, rich wine with a lovely honeyed taste, one of the best Australian chardonnays I can remember. For drinking immediately: it is impossible to imagine how it could im- prove, and it might start going to sleep in six or nine months' time as these New South Welshmen are prone to do. At £5.95 the bottle it is a revelation, at £5.53 a miracle. Nobody who has ever enjoyed a glass of white burgundy should miss it; Which rather takes the gilt off the last offer, a village Chablis at the ruinous price of £7.29 (or £6.87 in bulk). I chose it for its smell, which is truly wondrous, a huge, oily, sewery collection of sensations, which I would be happy to inhale all day. The taste, although very pleasant, does not quite come up to it, ending a little water- ish, which son' I may find a relief. No doubt they would have charged £18 a bottle if the taste came within a hundred yards of the smell. But for those who like sniffing wine as much as drinking it, this represents a snip of a sniff.

The sample case, two bottles of each, works out at £63.98 (£58.98 reduced) for faint hearts who like to look before they leap. But the Pokolbin 1986 really does not need such caution. It is a real stunner which everybody will like.