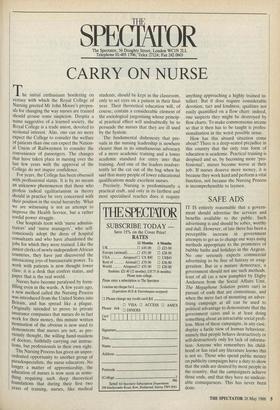 IT IS entirely reasonable that a govern- ment should advertise the services and benefits available to the public. Such athiertising is and should be sober, worthy and dull. However, of late there has been a perceptible increase in government attempts to get us to change our ways using methods appropriate to the promoters of bubble baths and holidays in the Aegean. No one seriously expects commercial advertising to be free of fantasy or exag- geration. But in a mature democracy, a government should not use such methods, least of all (as a new pamphlet by Digby Anderson from the Social Affairs Unit, The Megaphone Solution points out) in pursuit of ends that are contentious, and when the mere fact of mounting an adver- tising campaign, at all can be used to political advantage to demonstrate that the government cares and is at least doing something about an intractable social prob- lem. Most of these campaigns, in any case, display a facile view of human behaviour, namely that people behave destructively or self-destructively only for lack of informa- tion. Anyone who remembers his child- hood or has read any literature knows this is not so. Those who spend public money on publicity campaigns have a duty to show that the ends are desired by most people in the country, that the campaigners achieve those ends, and that they have no undesir- able consequences. This has never been done.