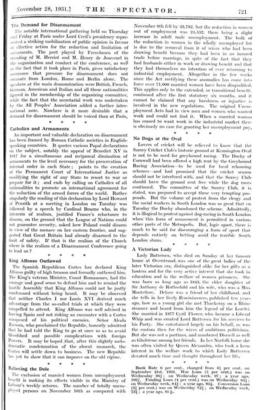 Page 3, 28 November 1931 — A Victorian Lady Lady Battersea, who died on Sunday at
Close

A Victorian Lady Lady Battersea, who died on Sunday at

her famous house at Overstrand, was one of the great ladies of the later Victorian era, distinguished alike for her gifts as a hostess and for the very active interest that she took in education and in the welfare of women prisoners. She was born as long ago as 1843, the elder daughter of Sir Anthony de Rothschild and his wife, who was a Miss Montefiore. Delane was a friend of her childhood, and she tells in her lively Reminiscences, published ten years ago, how as a young girl she met Thackeray on a Rhine steamer and heard from him the legend of the Lorelei. She married in 1877 Cyril Flower, who became a Liberal Whip and was created Lord Battersea for his services to his Party. She entertained largely on his behalf, as was the custom then for the wives of ambitious politicians. But she was not a partizan, and numbered Disraeli as well as Gladstone among her friends. In her Norfolk home she was often visited by Queen Alexandra, who took a keen interest in the welfare work to which Lady Battersea devoted much time and thought throughout her life.