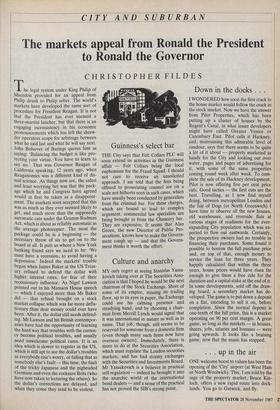 The legal system under King Philip of Macedon provided for an appeal from Philip drunk to Philip sober. The world's markets have developed the same sort of procedure for President Reagan. It is not that the President has ever seemed a three-martini luncher, but that there is an engaging inconsistency in his economic pronouncements which has left the shrew- der operators scope for arbitrage between what he said last and what he will say next. John Bolsover of Barings quotes him as saying: 'Balancing the budget is like pro- tecting your virtue. You have to learn to say no.' That was Governor Reagan of California speaking, 12 years ago, when Reaganomics was a different kind of dis- mal science. As things now are, the safest and least worrying bet was that the pack- age which he and Congress have agreed would at first be taken as a disappoint- ment. The markets soon accepted that this was as much as they ever seemed likely to get, and much more than the supposedly automatic cuts under the Gramm-Rudman Act, which is about as reliably automatic as the average photocopier. The most the package could be is a beginning — the necessary throw of six to get on to the board at all. It puts us where a New York banking friend says we need to be: 'We must have a recession, to avoid having a depression.' Indeed the markets' trouble began when James Baker at the US Treas- ury refused to defend the dollar with higher interest rates, for fear of their recessionary influence. As Nigel Lawson pointed out in his Mansion House speech — which I enjoyed more than Mr Baker did — that refusal brought on a stock market collapse which was far more defla- tionary than dear money could ever have been. After it, the dollar still needs defend- ing. Mr Lawson and his British contempor- aries have had the opportunity of learning the hard way that troubles with the curren- cy become political troubles, and usually need unwelcome political cures. It is an idea which is slower to register in the US, which is still apt to see the dollar's troubles as everybody else's worry, or failing that as somebody else's fault — this time, the fault of the tricky Japanese and the pigheaded Germans and even the cocksure Brits (who have now taken to lecturing the others). So the dollar's corrections are delayed, and when they come they tend to be violent.