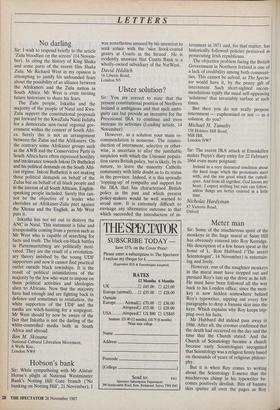 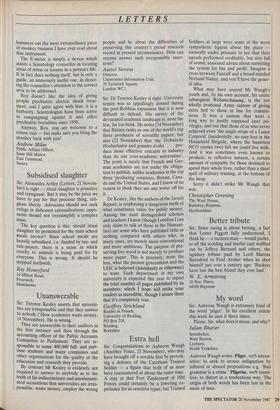 Sir: Some of the mischievous spirit of the monkeys in the huge mural at Saint Hill has obviously entered into Roy Kerridge. His description of a few hours spent at the home of L. Ron Hubbard (`The secret Scientologist', 14 November) is entertain- ing and lively.

However, one of the naughtier monkeys in the mural must have stepped out and pursued Roy's taxi up the drive as he left. He must have been followed all the way back to his London office, since the mon- key is now hidden somewhere behind Roy's typewriter, nipping out every few paragraphs to drop a banana skin into the keys. Which explains why Roy keeps trip- ping over his facts.

Mr Hubbard did indeed pass away in 1986. After all, the coroner confirmed that the death had occurred on the day and the time that the Church stated. And the Church of Scientology became a church because early Scientologists recognised that Scientology was a religion firmly based on thousands of years of religious philoso- phy.

But it is when Roy comes to writing about the Scientology E-meter that the mischievous chimp in his typewriter be- comes positively devilish. Bits of banana skin spatter all over the pages as Roy

hammers out the most extraordinary piece of monkey business I have ever read about that instrument.

The E-meter is simply a device which assists a Scientology counsellor in locating areas of stress or trauma in a person's life. It in fact does nothing itself, but is only a guide, an immensely useful one, in direct- ing the counsellor's attention to the correct area to be addressed.

Roy doesn't like the idea of giving people psychiatric electric shock treat- ment, and I quite agree with him: it is a barbarity. Scientologists have been active in campaigning against it and other psychiatric brutalities since 1950.

Anyway, Roy, you are welcome to a return visit — but make sure you bring the monkey back with you!