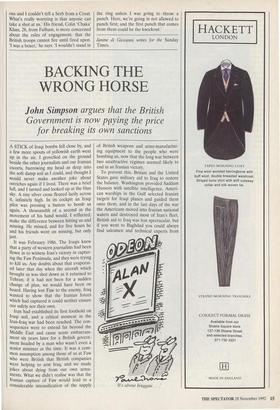 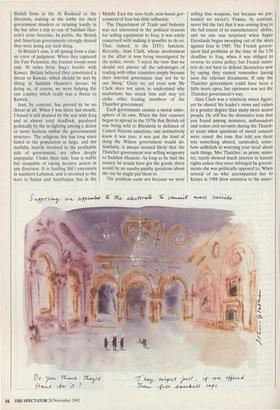 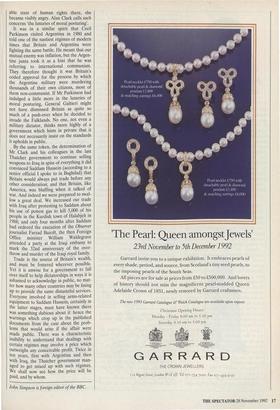 John Simpson argues that the British

Government is now ',flying the price for breaking its own sanctions

A STICK of Iraqi bombs fell close by, and a few more spouts of yellowish earth went up in the air. I grovelled on the ground beside the other journalists and our Iranian escorts, burrowing my head as deep into the soft damp soil as I could, and thought I would never make another joke about ostriches again if I lived. There was a brief lull, and I turned and looked up at the blue sky. A tiny silver cross floated lazily across It, infinitely high. In its cockpit an Iraqi pilot was pressing a button to bomb us again. A thousandth of a second in the movement of his hand would, I reflected, make the difference between hitting us and missing. He missed, and for five hours he and his friends went on missing, but only just.

It was February 1986. The Iraqis knew that a party of western journalists had been flown in to witness Iran's victory in captur- ing the Faw Peninsula, and they were trying to kill us. Any doubts about that evaporat- ed later that day when the aircraft which brought us was shot down as it returned to Tehran; if it had not been for a sudden change of plan, we would have been on board. Having lost Faw to the enemy, Iraq wanted to show that the Iranian forces which had captured it could neither ensure our safety nor their own.

Iran had established its first foothold on Iraqi soil, and a critical moment in the Iran-Iraq war had been reached. The con- sequences were to extend far beyond the Middle East and cause acute embarrass- ment six years later for a British govern- ment headed by a man who wasn't even a senior minister at the time. It was a com- mon assumption among those of us at Faw who were British that British companies were, helping to arm Iraq, and we made jokes about dying from our own arma- ments. What we didn't realise was that the Iranian capture of Faw would lead to a considerable intensification of the supply

of British weapons and arms-manufactur- ing equipment to the people who were bombing us, now that the long war between two unattractive regimes seemed likely to end in an Iranian victory.

To prevent this, Britain and the United States gave military aid to Iraq to restore the balance. Washington provided Saddam Hussein with satellite intelligence, Ameri- can warships in the Gulf selected Iranian targets for Iraqi planes and guided them onto them, and in the last days of the war the Americans moved into Iranian national waters and destroyed most of Iran's fleet. British aid to Iraq was less spectacular, but if you went to Baghdad you could always find salesmen and technical experts from 'It's about Iraggate. . British firms at the Al Rasheed or the Sheraton, waiting in the lobby for their government minders or relaxing loudly in the bar after a trip to one of Saddam Hus- sein's arms factories. In public, the British and American governments strongly denied they were doing any such thing.

In Britain's case, it all sprang from a clas- sic error of judgment. When they captured the Faw Peninsula, the Iranian troops were only 30 miles from Iraq's border with Kuwait. Britain believed they constituted a threat to Kuwait, which should be met by tilting in Saddam Hussein's favour; by doing so, of course, we were helping the one country which really was a threat to Kuwait.

Iran, by contrast, has proved to be no threat at all. When I was there last month, I found it still drained by the war with Iraq and in almost total deadlock, paralysed politically by the in-fighting among a dozen or more factions within the governmental structure. The religious fire has long since faded in the population at large, and the mullahs, heavily involved in the profitable side of government, are often deeply unpopular. Under their rule, Iran is stable but incapable of, taking decisive action in any direction. It is funding Shi'i extremists in southern Lebanon, and is involved in the wars in Sudan and Azerbaijan; but in the

The Department of Trade and Industry was not interested in the political reasons for selling equipment to Iraq; it was solely concerned with making it possible to do so. That, indeed, is the DTI's function. Recently, Alan Clark, whose involvement in the affair is now being investigated by the police, wrote: 'I reject the view that we should not pursue all the advantages of trading with other countries simply because their internal governance may not be to our liking.' Quite so; yet even now Mr Clark does not seem to understand why misfortune has struck him and may yet strike other leading members of the Thatcher government.

Each government creates a moral atmo- sphere of its own. When the first rumours began to spread in the 1970s that British oil was being sold to Rhodesia in defiance of United Nations sanctions, one instinctively knew it was true: it was just the kind of thing the Wilson government would do. Similarly, it always seemed likely that the Thatcher government was selling weaponry to Saddam Hussein. As long as he had the money, he would have got the goods; there would be no namby-pamby questions about the use he might put them to.

The problem came not because we were selling him weapons, but because we pre- tended we weren't. France, by contrast, never hid the fact that it was arming Iraq to the full extent of its manufacturers' ability, and no one was surprised when Super Etendards began swooping out of the skies against Iran in 1985. The French govern- ment had problems at the time of the UN deadline to Iraq, when it was obliged to reverse its entire policy; but French minis- ters do not have to defend themselves now by saying they cannot remember having seen the relevant documents. If only the Thatcher government could have been a little more open, but openness was not the Thatcher government's way.

Alan Clark was a relatively minor figure, yet he shared his leader's views and values to a greater degree than many more senior people. He still has the dismissive tone that you found among ministers, ambassadors and senior civil servants during the Thatch- er years when questions of moral concern were raised: the tone that told you there was something absurd, outmoded, some- how unBritish in worrying your head about such things. Mrs Thatcher, as prime minis- ter, rarely showed much interest in human rights unless they were infringed by govern- ments she was politically opposed to. When several of us who accompanied her to Kenya in 1988 drew attention to the miser- able state of human rights there, she became visibly angry. Alan Clark calls such concerns 'the luxuries of moral posturing'.

It was in a similar spirit that Cecil Parkinson visited Argentina in 1980 and told one of the nastiest regimes of modern times that Britain and Argentina were fighting the same battle. He meant that our mutual enemy was inflation, but the Argen- tine junta took it as a hint that he was referring to international communism. They therefore thought it was Britain's coded approval for the process by which the Argentine military were murdering thousands of their own citizens, most of them non-communist. If Mr Parkinson had indulged a little more in the luxuries of moral posturing, General Galtieri might not have dismissed Britain as quite so much of a push-over when he decided to invade the Falklands. No one, not even a military dictator, thinks more highly of a government which hints in private that it does not necessarily insist on the standards it upholds in public. By the same token, the determination of Mr Clark and his colleagues in the last Thatcher government to continue selling weapons to Iraq in spite of everything it did convinced Saddam Hussein (according to a senior official I spoke to in Baghdad) that Britain would always put trade before any other consideration; and that Britain, like America, was bluffing when it talked of war. And indeed we were prepared to swal- low a great deal. We increased our trade with Iraq after protesting to Saddam about his use of poison gas to kill 5,000 of his people in the Kurdish town of Halabjeh in 1988; and only four months after Saddam had ordered the execution of the Observer Journalist Farzad Bazoft, the then Foreign Office minister William Waldegrave attended a party at the Iraqi embassy to mark the 32nd anniversary of the over- throw and murder of the Iraqi royal family.

Trade is the source of Britain's wealth, and must be fostered wherever possible. Yet it is unwise for a government to fall over itself to help dictatorships in ways it is ashamed to acknowledge in public, no mat- ter how many other countries may be lining up to provide the same distasteful services. Everyone involved in selling arms-related equipment to Saddam Hussein, certainly in the latter stages, must have known there was something dubious about it: hence the warnings which crop up in the published documents from the case about the prob- lems that would arise if the affair were made public. There was a characteristic inability to understand that dealings with certain regimes may involve a price which outweighs any conceivable profit. Twice in ten years, first with Argentina and then with Iraq, the Thatcher government man- aged to get mixed up with such regimes. We shall now see how the price will be paid, and by whom.

John Simpson is foreign editor of the BBC.