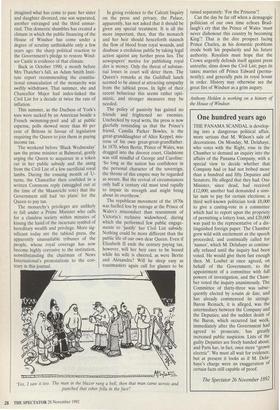 THE PANAMA SCANDAL is develop- ing into a dangerous political affair, more serious that M. Wilson's sale of decorations. On Monday, M. Delahaye, who votes with the Right, rose in the Chamber to demand an inquiry into the affairs of the Panama Company, with a special view to decide whether that. Company had or had not bribed more than a hundred and fifty Deputies and Senators. He alleged that they had. One Minister, since dead, had received £12,000; another had demanded a simi- lar sum to pay for certain elections; a third well-known politician took £8,000 to give a casting-vote in a committee which had to report upon the propriety of permitting a lottery loan, and £20,000 was paid to the representative of a dis- tinguished foreign paper. The Chamber grew wild with excitement as the speech proceeded, and continually called for `names', which M. Delahaye as continu- ally refused until the inquiry had been voted. He would give them fast enough then. M. Loubet at once agreed, on behalf of the Government, to the appointment of a committee with full powers of investigation, and the Cham- ber voted the inquiry unanimously. The Committee of thirty-three was subse- quently elected by scrutin de liste, and has already commenced its sittings. Baron Reinach, it is alleged, was the intermediary between the Company and the Deputies; and the sudden death of the Baron, which occurred last week, immediately after the Government had agreed to prosecute, has greatly increased public suspicion. Lists of the guilty Deputies are freely handed about, and Paris has, in fact, once more "grown electric". We must all wait for evidence, but at present it looks as if M. Dela- haye's charge were an exaggeration of certain facts still capable of proof.