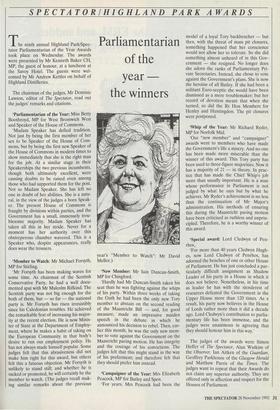 Parliamentarian of the year the winners

The ninth annual Highland Park/Spec- tator Parliamentarian of the Year Awards took place on Wednesday. The awards were presented by Mr Kenneth Baker CH, MP, the guest of honour, at a luncheon at the Savoy Hotel. The guests were wel- comed by Mr Andrew Kettles on behalf of Highland Distilleries.

The chairman of the judges, Mr Dominic Lawson, editor of The Spectator, read out the judges' remarks and citations.

`Parliamentarian of the Year Miss Betty Boothroyd, MP for West Bromwich West and Speaker of the House of Commons.

`Madam Speaker has defied tradition. Not just by being the first member of her sex to be Speaker of the House of Com- mons, but by being the first new Speaker of the House of Commons in modern times to show immediately that she is the right man for the job. At a similar stage in their Speakerships the two previous incumbents, though both ultimately excellent, were causing doubts to be raised even among those who had supported them for the post. Not so Madam Speaker. She has left no one in doubt of her abilities. She is a natu- ral, in the view of the judges a born Speak- er. The present House of Commons is fraught by divisions within parties, and the Government has a small, immensely trou- blesome majority. Madam Speaker has taken all this in her stride. Never for a moment has her authority over this obstreperous chamber wavered. This is a Speaker who, despite appearances, really does wear the trousers.

`Mr Forsyth has been making waves for some time. As chairman of the Scottish Conservative Party, he had a well docu- mented spat with Mr Malcolm Rifkind. The Scottish party was not big enough for the both of them, but — so far — the national party is. Mr Forsyth has risen irresistibly since his Caledonian troubles. He achieved the remarkable feat of increasing his major- ity at the recent election. He is now Minis- ter of State at the Department of Employ- ment, where he makes a habit of taking on the European Community in that body's desire to run our employment policy. He has not always made himself popular. Some judges felt that this abrasiveness did not make him right for this award, but others felt this a fatuous objection. Mr Forsyth is unlikely to stand still; and whether he is sacked or promoted, he will certainly be the member to watch. (The judges recall mak- ing similar remarks about the previous year's "Member to Watch": Mr David Mellor.) 'New Member. Mr kin Duncan-Smith, MP for Chingford.

`Hardly had Mr Duncan-Smith taken his seat than he was fighting against the whips of his party. Within three weeks of taking the Oath he had been the only new Tory member to abstain on the second reading of the Maastricht Bill — and, for good measure, made an impressive maiden speech in the debate in which he announced his decision to rebel. Then, ear- lier this month, he was the only new mem- ber to vote against the Government on the Maastricht paving motion. He has integrity and the courage of his convictions. The judges felt that this might stand in the way of his preferment; and therefore felt that they should prefer him instead.

'Campaigner of the Year. Mrs Elizabeth Peacock, MP for Batley and Spen.

`For years, Mrs Peacock had been the model of a loyal Tory backbencher — but then, with the threat of mass pit closures, something happened that her conscience would not allow her to tolerate. So she did something almost unheard of in this Gov- ernment — she resigned. No longer does she adorn the ranks of Parliamentary Pri- vate Secretaries. Instead, she chose to vote against the Government's plans. She is now the heroine of all Batley. If she had been a militant Euro-sceptic she would have been dismissed as a mere troublemaker; but her record of devotion meant that when she turned, so did the Rt Hon Members for Henley and Huntingdon. The pit closures were postponed.

`Our "new member" and "campaigner" awards went to members who have made the Government's life a misery. And no one has been made more miserable than the winner of this award. This Tory party has been used to three-figure majorities. Now it has a majority of 21 — in theory. In prac- tice that has made the Chief Whip's job more than usually important. He is a man whose performance in Parliament is not judged by what he says but by what he achieves. Mr Ryder's achievement is no less than the continuation of Mr Major's administration. His methods of ensuring this during the Maastricht paving motion have been criticised as ruthless and unprin- cipled. Therefore, he is a worthy winner of this award.

`For more than 40 years Cledwyn Hugh- es, now Lord Cledwyn of Penrhos, has adorned the benches of one or other House of Parliament. He has just concluded a par- ticularly difficult assignment as Shadow Leader of his party in a House in which it does not believe. Nonetheless, in his time as leader he has with the slenderest of resources defeated the Government in the Upper House more than 120 times. As a result, his party now believes in the House of Lords rather more than it did a decade ago. Lord Cledwyn's contribution to parlia- mentary life has been immense, and the judges were unanimous in agreeing that they should honour him in this way.'

The judges of the awards were Simon Heifer of The Spectator, Alan Watkins of the Observer, Ian Aitken of the Guardian, Geoffrey Parkhouse of the Glasgow Herald and Matthew Parris of the Times. The judges want to repeat that their Awards do not claim any superior authority. They are offered only in affection and respect for the Houses of Parliament.