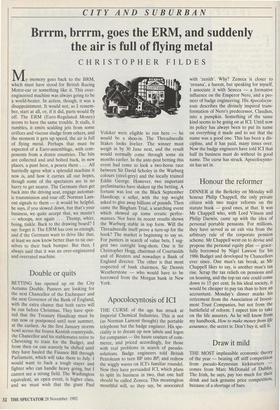 Brrrm, brrrm, goes the ERM, and suddenly the air is full of flying metal

My memory goes back to the BRM, which must have stood for British Racing Motor-car or something like it. This over- engineered machine was always going to be a world-beater. In action, though, it was a disappointment. It would not, as I remem- ber, start at all, or, if it did, parts would fly off. The ERM (Euro-Regulated Money) seems to have the same trouble. It stalls, it rumbles, it emits scalding jets from some orifices and viscous sludge from others, and the moment it gets up speed, the air is full of flying metal. Perhaps that must be expected of a Euro-assemblage, with com- ponents from a dozen countries. The bits are collected and and bolted back, in new places, a punt here, a peseta there . . . All hurriedly agree what a splendid machine it now is, and how it carries all our hopes, though some of the spectators are in no hurry to get nearer. The Germans then get back into the driving seat, engage automat- ic transmission and roar off. Norman Lam- ont signals to them — it would be helpful, he says, if you slowed down, but that's your business, we quite accept that, we mustn't — whoops, not again . . . Thump, whirr, boing, tinkle. Back to the drawing board? I say: forget it. The ERM has cost us enough, and if the Germans want to drive like that, at least we now know better than to tie our- selves to their back bumper. But then, I always said that it was an over-engineered and overrated machine.

BETTING has opened up on the City Autumn Double. Punters are looking for the next Chancellor of the Exchequer and the next Governor of the Bank of England, with the extra chance that both races will be run before Christmas. They have spot- ted that the Treasury Handicap must be run now or postponed until next summer, at the earliest. As the first January storms howl across the frozen Kentish countryside, the Chancellor and his stablemates retire to Chevening to train for the Budget, and from then on can scarcely be shifted until they have hauled the Finance Bill through Parliament, which will take them to July. I would want to back a tough stayer and fighter who can handle heavy going, but I cannot see a strong field. The Washington equivalent, an open event, is higher class, and we must wish that the giant Paul Volcker were eligible to run here — he would be a shoo-in. The Threadneedle Stakes looks livelier. The winner must weigh in by 30 June next, and the result would normally come through some six months earlier. In the ante-post betting this event had come to look a two-horse race between Sir David Scholey in the Warburg colours (steel-grey) and the locally trained Eddie George. However, two important preliminaries have shaken up the betting. A fortune was lost on the Black September Handicap, a seller, with the top weight asked to give away billions of pounds. Then came the Bingham Trial, a searching event which showed up some erratic perfor- mances. Nor have its recent results shown the Warburg stable in top form. Will the Threadneedle itself prove a turn-up for the book? The market is beginning to say so. For punters in search of value bets, I sug- gest two outright long-shots. One is Sir Christopher Hogg, chairman of Courtaulds and of Reuters and nowadays a Bank of England director. The other is that most respected of bank chairmen, Sir Dennis Weatherstone — who would have to be borrowed from the Morgan bank in New York.

THE CURSE of the age has struck at Imperial Chemical Industries. This is not (as Norman Lamont thought) the portable telephone but the badge engineer. His spe- ciality is to dream up new labels and logos for companies — the haute couture of com- merce, and priced accordingly, for those with real problems in search of pseudo- solutions. Badge engineers told British Petroleum to turn BP into BP, and redrew the wiggly waves on ICI's familiar roundel. Now they have persuaded ICI, which plans to split its business in two, that one half should be called Zeneca. This meaningless mouthful will, so they say, be associated

with 'zenith'. Why? Zeneca is closer to `zenana', a harem, but speaking for myself, I associate it with Seneca — a formative influence on the Emperor Nero, and a pio- neer of badge engineering. His Apocolocyn- costs describes the divinely inspired trans- formation of Nero's predecessor, Claudius, into a pumpkin. Something of the same kind seems to be going on at ICI. Until now its policy has always been to put its name on everything it made and to see that the name was a good one. This has been a dis- cipline, and it has paid, many times over. Now the badge engineers have told ICI that half its business must do without its good name. The curse has struck. Apocolocynto- sis has set in.

DINNER at the Berkeley on Monday will honour Philip Chappell, the only private citizen with two major reforms on the statute book — good ones, at that. It was Mr Chappell who, with Lord Vinson and Philip Darwin, came up with the idea of personal portable pensions. For millions, they have served as an exit visa from the arbitrary rule of the corporate pension scheme. Mr Chappell went on to devise and propose the personal equity plan — grace- fully borrowed by Nigel Lawson for his 1986 Budget and developed by Chancellors ever since. One man's tax break, as Mr Chappell likes to say, is another man's tax rise. Scrap the tax reliefs on pensions and on housing, and the top tax rate could come down to 15 per cent. In his ideal society, it would be cheaper to pay tax than to hire an accountant. Monday's dinner marks his retirement from the Association of Invest- ment Trust Companies, but not from the battlefield of reform. I expect him to take on the life assurers. As he will know from my handbook, How to make money from hfe assurance, the secret is: Don't buy it, sell it.

THE MOST implausible economic theory of the year — beating off stiff competition from pseudo-Keynesian kickstarters — comes from Marc McDonald of Dublin. The Irish, he says, pay too much for their drink and lack genuine price competition, because of a shortage of bars.