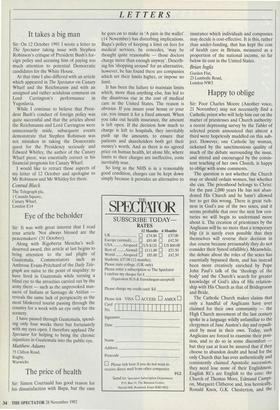 LETTERS It takes a big man

Sir: On 12 October 1991 I wrote a letter to The Spectator taking issue with Stephen Robinson's critique of President Bush's for- eign policy and accusing him of paying too much attention to potential Democratic candidates for the White House.

At that time I also differed with an article which appeared in The Spectator on Canary Wharf and the Reichmanns and with an unsigned and rather acidulous comment on Lord Carrington's performance in Yugoslavia.

While I continue to believe that Presi- dent Bush's conduct of foreign policy was quite successful and that the articles about the Reichmanns and Lord Carrington were unnecessarily snide, subsequent events demonstrate that Stephen Robinson was not mistaken in taking the Democratic quest for the Presidency seriously and Edward Whitley, the author of the Canary Wharf piece, was essentially correct in his financial prognosis for Canary Wharf.

I would like to retract those aspects of my letter of 12 October and apologise to Mr Robinson and Mr Whitley for them.