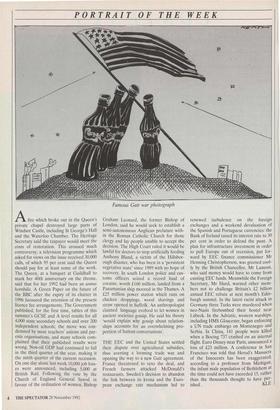 Famous Gatt war photograph Afire which broke out in the Queen's private chapel destroyed large parts of Windsor Castle, including St George's Hall and the Waterloo Chamber. The Heritage Secretary said the taxpayer would meet the costs of restoration. This aroused much controversy; a television programme which asked for views on the issue received 30,000 calls, of which 95 per cent said the Queen should pay for at least some of the work. The Queen, at a banquet at Guildhall to mark her 40th anniversary on the throne, said that for her 1992 had been an annus horribilis. A Green Paper on the future of the BBC after the expiry of its charter in 1996 favoured the retention of the present licence fee arrangements. The Government published, for the first time, tables of this summer's GCSE and A level results for all 4,000 state secondary schools and over 200 independent schools; the move was con- demned by most teachers' unions and par- ents organisations, and many schools com- plained that their published results were wrong. Non-oil GDP had continued to fall in the third quarter of the year, making it the ninth quarter of the current recession. On one day alone last week 10,000 job loss- es were announced, including 5,000 at British Rail. Following the vote by the Church of England General Synod in favour of the ordination of women, Bishop

Graham Leonard, the former Bishop of London, said he would seek to establish a semi-autonomous Anglican prelature with- in the Roman Catholic Church for those clergy and lay people unable to accept the decision. The High Court ruled it would be lawful for doctors to stop artificially feeding Anthony Bland, a victim of the Hillsbor- ough disaster, who has been in a 'persistent vegetative state' since 1989 with no hope of recovery. In south London police and cus- toms officers seized a record haul of cocaine, worth £160 million, landed from a Panamanian ship moored in the Thames. A £25 million power station which runs on chicken droppings, wood shavings and straw opened in Suffolk. An anthropologist claimed language evolved to let women in ancient societies gossip. He said his theory `would explain why gossip about relation- ships accounts for an overwhelming pro- portion of human conversations'.

THE EEC and the United States settled their dispute over agricultural subsidies, thus averting a looming trade war and opening the way to a new Gatt agreement. France threatened to veto the deal, and French farmers attacked McDonald's restaurants. Sweden's decision to abandon the link between its krona and the Euro- pean exchange rate mechanism led to

renewed turbulence on the foreign exchanges and a weekend devaluation of the Spanish and Portuguese currencies: the Bank of Ireland raised its interest rate to 30 per cent in order to defend the punt. A plan for infrastructure investment in order to pull Europe out of recession, put for- ward by EEC finance commissioner Mr Henning Christopherson, was greeted cool- ly by the British Chancellor, Mr Lamont, who said money would have to come from existing EEC funds. Meanwhile the Foreign Secretary, Mr Hurd, warned other mem- bers not to challenge Britain's £2 billion annual EEC rebate at next month's Edin- burgh summit. In the latest racist attack in Germany three Turks were murdered when neo-Nazis firebombed their hostel near Lubeck. In the Adriatic, western warships, including HMS Gloucester, began enforcing a UN trade embargo on Montenegro and Serbia. In China, 141 people were killed when a Boeing 737 crashed on an internal flight. Euro Disney near Paris, announced a loss of £23 million. A conference in San Francisco was told that Herod's Massacre of the Innocents has been exaggerated; according to a professor from Michigan, the infant male population of Bethlehem at the time could not have exceeded 15, rather than the thousands thought to have per-