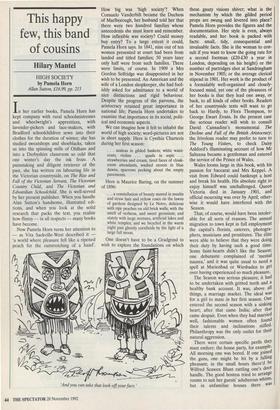 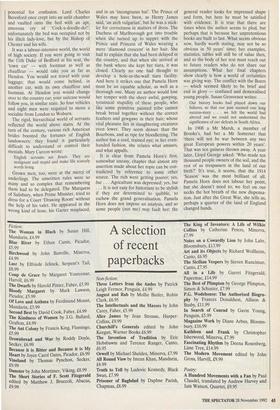 This happy few, this band of cousins

HIGH SOCIETY by Pamela Horn Allan Sutton, f16.99, pp. 215 In her earlier books, Pamela Horn has kept company with rural schoolmistresses and wheelwright's apprentices, with lavender-pickers and lace-makers, with Bradford schoolchildren sewn into their clothes for the duration of winter; she has studied sweatshops and shoeblacks, taken us into the spinning mills of Oldham and into a Derbyshire classroom so cold that one winter's day the ink froze. A painstaking and diligent retriever of the past, she has written on labouring life in the Victorian countryside, on The Rise and Fall of the Victorian Servant, The Victorian Country Child, and The Victorian and Edwardian Schoolchild. She is well-served by her present publisher. When you handle Alan Sutton's handsome, illustrated edi- tions, and when you look at the solid research that packs the text, you realise how flimzy — in all respects — many books have become.

Now Pamela Horn turns her attention to — as Vita Sackville-West described it 'a world where pleasure fell like a ripened peach for the outstretching of a hand'. How big was 'high society'? When Consuelo Vanderbilt became the Duchess of Marlborough, her husband told her that there were two hundred families whose antecedents she must learn and remember. How inflexible was society? Could money buy entry? To a large extent it could, Pamela Horn says. In 1841, nine out of ten women presented at court had been from landed and titled families; 50 years later only half were from such families. There were limits, of course. In 1909 a Mrs Gordon Selfridge was disappointed in her wish to be presented. An American and the wife of a London shopkeeper, she had fool- ishly asked for admittance to a world of nice distinctions and rigid behaviour. Despite the progress of the parvenu, the aristocracy retained great importance in national life; Pamela Horn undertakes to examine that importance in its social, polit- ical and economic aspects.

We can imagine how it felt to inhabit the world of high society; word-pictures are not in short supply. Here is Cynthia Charteris during her first season:

... a constellation of beauty moved in muslin and straw hats and yellow roses on the lawns of gardens designed by Le Notre, delicious with ripe peaches on old brick walls, with the smell of verbena, and sweet geranium; and stately with large avenues, artificial lakes and white temples; and we bicycled in the warm night past ghostly cornfields by the light of a large full moon.

One doesn't have to be a Gradgrind to wish to explore the foundations on which And you can take that look off your face.' these gauzy visions shiver; what is the mechanism by which the gilded period props are swung and levered into place? Pamela Horn provides the figures and the documentation. Her style is even, always readable, and her book is packed with facts: small, tidy, consequential and invaluable facts. She is the woman to con- sult if you want to know the going rate for a second footman (£20-£30 a year in London, depending on his height) or the number of partridges shot at Sandringham in November 1905; or the average clerical stipend in 1901. Her work is the product of a formidably well-organised and closely- focused mind, yet one of the pleasures of her books is that they lead one away, or back, to all kinds of other books. Readers of her countryside texts will want to go back to Hardy, to Flora Thompson, to George Ewart Evans. In the present case the serious reader will wish to consult David Cannadine's monumental The Decline and Fall of the British Aristocracy; the frivolous reader may prefer to turn to The Young Visiters, to check Daisy Ashford's illuminating account of how Mr Salteena became a gentleman and entered the service of the Prince of Wales.

Wales looms large in this book, with his passion for baccarat and Mrs Keppel. A visit from Edward could bankrupt a host and break his health. His absolute right to enjoy himself was unchallenged. Queen Victoria died in January 1901, and official mourning was over by April; other- wise it would have interfered with the Season.

That, of course, would have been intoler- able for all sorts of reasons. The annual migration to town kept in full employment the capital's florists, caterers, photogra- phers, musicians and prostitutes. The elite were able to believe that they were doing their duty by having such a good time. Some faint-hearts didn't like the Season; one debutante complained of 'mental nausea,' and it was quite usual to need a spell at Marienbad or Wiesbaden to get over having experienced so much pleasure. The Season was serious pleasure; it had to be undertaken with gritted teeth and a healthy bank account. It was, above all things, a marriage market. The ideal was for a girl to mate in her first season. One entered the second season with a sinking heart; after that came India; after that came despair. Even when they had married well, fashionable women often found their talents and inclinations stifled• Philanthropy was the only outlet for their natural aggression.

There were certain specific perils they must endure: the house party, for example• All morning one was bored. If one joined the guns, one might be hit by a falling pheasant; in the small hours there'd be Wilfred Scawen Blunt rattling one's door handle. The good hostess tried to arrange rooms to suit her guests' adulterous whims, but in unfamiliar houses there was potential for confusion. Lord Charles Beresford once crept into an unlit chamber and vaulted onto the bed with an apt, amorous cry of 'Cock-a-doodle-do!'; unfortunately the bed was occupied not by his illicit lady-love, but by the Bishop of Chester and his wife.

It was a labour-intensive world, the world of high society. If you were going to visit the 11th Duke of Bedford at his seat, the `town car' - with footman as well as chauffeur - would take you as far as Hendon. You would not travel with your luggage; that would come behind, in another car, with its own chauffeur and footman. At Hendon you would change over to the country car; your suitcase would follow you, in similar state. So four vehicles and eight men were required to move a socialite from London to Woburn.

The rigid, hierarchical world of servants reflected the world above stairs. At the turn of the century, various rich American brides boosted the fortunes of English landowners; they found it particularly difficult to understand or control their menials. Mary Curzon wrote: English servants are fiends. They are malignant and stupid and make life scarcely worth living.

Grown men, too, were at the mercy of underlings. The unwritten rules were so many and so complex that remembering them had to be delegated. The Marquess of Salisbury, when Prime Minister, tried to dress for a Court 'Drawing Room' without the help of his valet. He appeared in the wrong kind of hose, his Garter misplaced, and in an 'incongruous hat'. The Prince of Wales may have been, as Henry James said, 'an arch vulgarian', but he was a stick- ler for correctness in matters of dress. The Duchess of Marlborough got into trouble when she turned up to supper with the Prince and Princess of Wales wearing a mere 'diamond crescent' in her hair. She had to explain that she had been delayed in the country, and that when she arrived at the bank where she kept her tiara, it was closed. Clearly no one had thought to develop a hole-in-the-wall tiara facility. And here it strikes one that Pamela Horn must be an equable scholar, as well as a thorough one. Many an author would lose her temper with the sheer awful, gawping, tyrannical stupidity of these people, who like some primitive painted tribe cannot break bread together without the correct feathers and gewgaws in their hair; whose vital pleasure lies in slaughtering creatures even lower. They seem denser than the Bourbons, and as ripe for bloodletting. The author has a cool, trained eye; in her even- handed fashion, she relates what amuses, and what appalls.

It is clear from Pamela Horn's first, somewhat uneasy, chapter that almost any assertion made about her topic can be con- tradicted by reference to some other source. The rich were getting poorer; yes, but . . . Agriculture was depressed; yes, but . . . It is not easy for historians to be stylish if they are determined to quibble, to eschew the grand generalisation. Pamela Horn does not impose an analysis, and so some people (not me) may fault her; the general reader looks for impressed shape and form, but here he must be satisfied with evidence. It is true that there are times when the author seems to plod, but perhaps that is because her unpretentious books are built to last. What seems obvious now, hardly worth stating, may not be so obvious in 50 years' time; her examples, statistics, tables will still be of value then, and so the body of her text must reach out to future readers who do not share our assumptions. What her final chapters show clearly is how a world of certainties was giving way. The conflict with the Boers - which seemed likely to be brief and end in glory - confused and demoralised young people. Susan Grosvenor writes: Our history books had played down our failures, so that our past seemed one long success-story . . . we felt the world had altered and we could not understand the significance of our defeats in South Africa.

In 1908 a Mr Marsh, a member of Brooks's, had bet a Mr Somerset that `there will not be war between any two great European powers within 20 years'. That was ten guineas thrown away. A year later, Lloyd George asked: 'Who made ten thousand people owners of the soil, and the rest of us trespassers in the land of our birth?' It's true, it seems, that the 1914 `Season' was the most brilliant of all. Pamela Horn does not labour her point, but she doesn't need to; we feel on our necks the hot breath of the new dispensa- tion. Just after the Great War, she tells us, perhaps a quarter of the land of England changed hands.