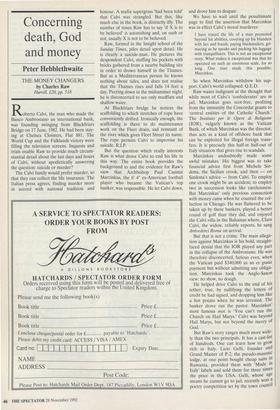 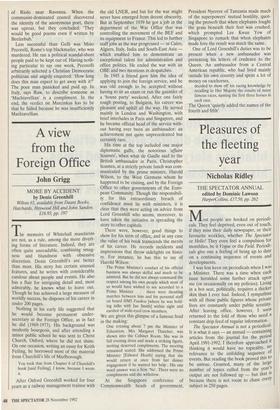 by Charles Raw Narvik £20, pp. 518 Roberto Calvi, the man who made the Banco Ambrosiano an international bank, was founding swinging from Blackfriars Bridge on 17 June, 1982. He had been stay- ing at Chelsea Cloisters, Flat 881. The World Cup and the Falklands victory were filling the television screens. Inquests and trials enable Raw to provide much circum- stantial detail about the last days and hours of Calvi, without apodictically answering the question: suicide or murder?

The Calvi family would prefer murder, so that they can collect the life insurance. The Italian press agrees, finding murder more in accord with national tradition and honour. A mafia supergrass 'had been told' that Calvi was strangled. But this, like much else in the book, is distinctly iffy. The number of times Raw has to say 'if X is to be believed' is astonishing and, on oath or not, usually X is not to be believed.

Raw, formed in the Insight school of the Sunday Times, piles detail upon detail. He is clearly a suicide-man. He pictures the despondent Calvi, stuffing his pockets with bricks gathered from a nearby building site in order to drown himself in the Thames. But as a Mediterranean person he knows nothing about tides, and does not realise that the Thames rises and falls 14 feet a day. Peering down in the midsummer night, he is disconcerted to see only mudflats and shallow water.

At Blackfriars bridge he notices the scaffolding to which stretches of rope have conveniently drifted. Ironically enough, the scaffolding is there to do maintenance work on the Fleet drain, sad remnant of the river which gives Fleet Street its name. The rope permits Calvi to improvise his suicide. R.I.P.

But the question which really interests Raw is what drove Calvi to end his life in this way. The entire book provides the background to and the evidence for Raw's view that Archbishop Paul Casimir Marcinkus, the 6' 4" ex-American football player who became the Vatican's top banker, was responsible. He let Calvi down, and drove him to despair.

We have to wait until the penultimate page to find the assertion that Marcinkus was in effect Calvi's moral murderer:

I have traced the life of a man promoted beyond his abilities, covering up his blunders with lies and frauds, paying blackmailers, gri- macing as he speaks and packing his luggage with tranquillisers. This is not an exceptional story. What makes it exceptional was that he operated on such an enormous scale, for so long. One man made this possible: Marcinkus.

Raw waxes indignant at the thought that while most of Calvi's 'confederates' are in jail, Marcinkus goes scot-free, profiting from the immunity the Concordat grants to 'central entities of the Catholic Church.' The Institute per le Opere di Religione (10R), vulgarly known as the Vatican Bank, of which Marcinkus was the director, thus acts as a kind of offshore bank that can be exploited for illegal foreign trans- fers. It is precisely this half-in half-out of Italy situation that gives rise to scandals.

Marcinkus undoubtedly made some awful mistakes. His biggest was to take financial advice first from Michele Sin- dona, the Sicilian crook, and then — on Sindona's advice — from Calvi. To employ one crook might be an accident; to employ two in succession looks like carelessness. But Marcinkus' only previous connection with money came when he counted the col- lection in Chicago. He was flattered to be taken up by these bankers, played a better round of golf than they did, and enjoyed the Calvi villa in the Bahamas where, Clara Calvi, the widow, reliably reports, he sang Arrivederci Roma on arrival.

But that is not a crime. The main allega- tion against Marcinkus is his bold, straight- faced denial that the IOR played any part in the collapse of the Ambrosiano. He was therefore disconcerted, furious even, when the Vatican paid $340,000 as an ex gratia payment but without admitting any obliga- tion. Marcinktis took the Anglo-Saxon view: no show, no dough.

He helped drive Calvi to the end of his tether, true, by nullifying the letters of credit he had signed, and dropping him like a hot potato when he was arrested. The banker drove out the pastor. Marcinkus' most famous mot is 'You can't run the Church on Hail Marys.' Calvi was beyond Hail Marys, but not beyond the mercy of God.

But Raw's story ranges much more wide- ly than the two principals. It has a cast-list of hundreds. One can learn how to grow rich in Italy. Licio Gelli, founder and Grand Master of P-2, the pseudo-masonic lodge, at one point bought cheap suits in Rumania, provided them with 'Made in Italy' labels and sold them for three times the price in the USA. Gelli, whose age means he cannot go to jail, recently won a poetry competition set by the town council of Riolo near Ravenna. When the communist-dominated council discovered the identity of the anonymous poet, there was uproar, but they concluded: 'They would be good poems even if written by Beelzebub.'

Less successful than Gelli was Mino Pecorelli, Rome's top blackmailer, who was murdered. He ran a political scandal-sheet people paid to be kept out of. Having noth- ing particular to say one week, Pecorelli arbitrarily selected a Christian Democratic politician and angrily enquired: 'How long does this man expect to get away with it?' The poor man panicked and paid up. In Italy, says Raw, to describe someone as `Machiavellian' is a compliment. In the end, the verdict on Marcinkus has to be that he failed because he was insufficiently Machiavellian.