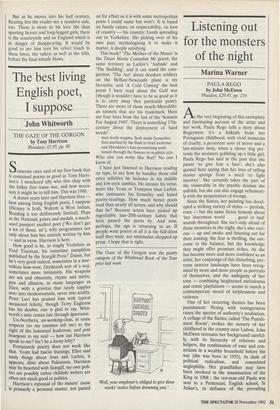 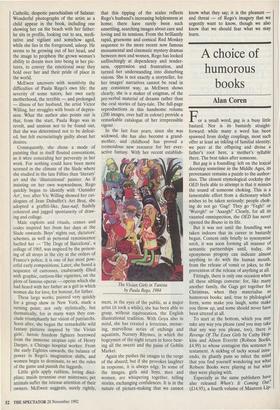 Listening out for the monsters of the night

PAULA REGO by John McEwen Phaidon, L29.95, pp. 214 Athe very beginning of this exemplary and fascinating account of the artist and her work, Paula Rego tells a story about Bogeymen; it's a folktale from her Portuguese childhood, with vivid moments of cruelty, a persistent note of terror and a last-minute twist, when a clever dog pre- vents the monsters gobbling up a little girl. Paula Rego has said in the past that she paints `to give fear a face'; she's also quoted here saying that her love of telling stories springs from a need `to fight injustice'. She certainly takes the part of the vulnerable in the psychic dramas she unfolds, but she can also engage vehement- ly with the perpetrators of wrongs.

Since the Sixties, her painting has devel- oped a striking variety of styles — periods, even — but the same fierce honesty about `her innermost world . . . good or bad' sounds throughout. She isn't only afraid of those monsters in the night, she's also curi- ous — up and awake and listening out for their coming; the fear is thrilling, the out- come in the balance, but the knowledge they might offer promises riches. As she has become more and more confident as an artist, her conjurings of this disturbing, per- verse interior landscape have been recog- nised by more and more people as portraits of themselves, and the ambiguity of her tone — combining heightened melodrama and comic playfulness — seems to match a comtemporary mood of helplessness and violence.

One of her recurring themes has been punishment: flirting with transgression raises the spectre of authority's retaliation. A collage of the Sixties, called 'The Punish- ment Room', evokes the nursery of her childhood in the country near Lisbon. John McEwen recreates her background careful- ly, with its hierarchy of relatives and helpers, the combination of ease and con- straints in a wealthy household before the war (she was born in 1935), its dash of political radicalism, and committed anglophilia. Her grandfather may have been involved in the assassination of the King in 1908 ; the ten-year-old Paula was sent to a Protestant, English school, St Julian's, in defiance of the prevailing Catholic, despotic parochialism of Salazar. Wonderful photographs of the artist as a child appear in the book, including one showing her on the beach with her father: he sits in profile, looking out to sea, medi- tative and vigilant and somehow aged, while she lies in the foreground, asleep. He seems to be growing out of her head, and the image to prophesy the grown woman's ability to dream men into being in her pic- tures, to convey the emotional sway they hold over her and their pride of place in the world.

McEwen uncovers with sensitivity the difficulties of Paula Rego's own life: the severity of some tutors, her own early motherhood, the terrible — and prolonged — illness of her husband, the artist Victor Willing, her struggles with bouts of depres- sion. What the author also points out is that, from the start, Paula Rego was in revolt, and anxious not to be found out, that she was determined not to be defeat- ed, but felt excruciatingly guilty about her desires.

Consequently, she chose a mode of painting that in itself flouted conventions, as it Were concealing her perversity in her work. For nothing could have been more scorned in the climate of the Slade where she studied in the late Fifties than 'literary' art and the `illustrational' painter. As if insisting on her own waywardness, Rego quickly began to identify with 'Outsider Art', too; after Vic Willing showed her cat- alogues of Jean Dubuffet's Art Brut, she adopted a graffiti-like, faux-naif, flashily coloured and jagged spontaneity of draw- ing and collage.

Male exploits and rituals, crimes and codes inspired her from her days at the Slade onwards. Boys' nights out, dictators' schemes, as well as personal reminiscence fuelled her — 'The Dogs of Barcelona', a collage of 1965, was inspired by the poison- ing of all strays in the city at the orders of Franco's police; it is one of her most pow- erful early compositions. Later, she based a sequence of canvasses, exuberantly filled with graphic, cartoon-like vignettes, on the plots of famous operas — operas which she had heard with her father as a girl in which women die for love, for honour, for father.

These large works, painted very quickly for a group show in New York, mark a turning point; not only stylistically, but thematically, for in many ways they con- clude triumphantly her vision of patriarchs. Soon after, she began the remarkable wild fantasy pictures inspired by 'the Vivian girls', heroic freedom fighters borrowed from the immense utopian epic of Henry Darger, a Chicago hospital worker. From the early Eighties onwards, the balance of power in Rego's imagination shifts, and women begin to dominate, to set the rules of the game and punish the laggards.

Little girls apply ruthless, loving disci- pline; maids tyrannise over mistresses; pet animals suffer the intense attention of their owners. McEwen suggests, surely rightly, that this tipping of the scales reflects Rego's husband's increasing helplessness at home; there have rarely been such unsettling, searching images about care and loving and its tensions. From the brilliantly rapid, gruesome and comical Red Monkey sequence to the more recent now famous monumental and cinematic mystery dramas between men and women, Rego has looked unflinchingly at dependency and tender- ness, oppression and frustration, and turned her understanding into disturbing visions. She is not exactly a storyteller, for her images' narratives cannot be read in any consistent way, as McEwen shows clearly; she is a maker of enigmas, of the pre-verbal material of dreams rather than the oral stories of fairy-tale. The full-page reproductions in this handsome volume (200 images, over half in colour) provide a remarkable catalogue of her irrepressible vigour.

In the last four years, since she was widowed, she has also become a grand- mother, and childhood has proved a tremendous new resource for her ever- active fantasy. With her recent establish- The Vivian Girls in Tunisia by Paula Rego, 1984 ment, in the eyes of the public, as a major artist (it took a while), she has been able to grasp, without equivocation, the English illustrational tradition. With Goya also in mind, she has created a ferocious, menac- ing, marvellous series of etchings and aquatints, Nursery Rhymes, in which the bogeymen of the night return in force bear- ing all the sweets and the pains of Goblin Market.

Again she pushes the images to the verge of the absurd; but if she provokes laughter in response, it is always edgy. In some of the images, girls and boys, men and women, are whispering together, telling stories, exchanging confidences. It is in the nature of picture-making that we cannot know what they say; it is the pleasure and threat — of Rego's imagery that we urgently want to know, though we also know that we should fear what we may learn.