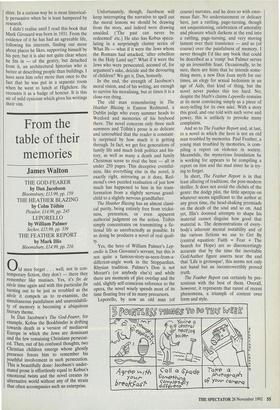 From the table of their memories

THE GOD-FEARER by Dan Jacobson Bloomsbury, f13.99, pp. 159 THE HEATHER BLAZING by Colm Toibin Picador, f14.99, pp. 245 LEPORELLO by William Palmer Secker, f15.99, pp. 339 THE FEATHER REPORT by Mark Illis Bloomsbury, 114.99, pp. 216 Old men forget . . . well, not in con- temporary fiction, they don't — there they remember like maniacs. Yes, it's fin de Steele time again and with this particular fin turning out to be just as troubled as the stecle it compels us to re-examine, the simultaneous painfulness and unavoidabili- ty of memory is becoming a ubiquitous literary theme. In Dan Jacobson's The God-Fearer, for example, Kobus the Bookbinder is drifting towards death in a 'version of mediaeval Europe in which the Jews are dominant and the few remaining Christians persecut- ed. Then, out of his confused thoughts, two Christian children emerge whose ghostly presence forces him to remember his youthful involvement in such persecution. This is beautifully done: Jacobson's under- stated prose is effortlessly equal to Kobus's emotional twists and the novel creates its alternative world without any of the strain that often accompanies such an enterprise. Unfortunately, though, Jacobson will keep interrupting the narrative to spell out the moral lessons we should be drawing from the story, and indeed were drawing unaided. (The past can never be redeemed' etc.) He also has Kobus specu- lating in a surprisingly clumsy series of What Ifs — what if it were the Jews whom the Romans had attacked, 'after rebellion in the Holy Land say?' What if it were the Jews who were persecuted, accused of, for argument's sake, deicide and the devouring of children? We get it, Dan, honestly.

In the end, the strength of Jacobson's moral vision, and of his writing, are enough to survive his moralising, but at times it is a close-run thing.

The old man remembering in The Heather Blazing is Eamon Redmond, a Dublin judge who every summer heads to Wexford and memories of his boyhood there. The novel concerns only three such summers and Toibin's prose is so delicate and untroubled that the reader is constant- ly surprised by how much it is getting through. In fact, we get five generations of family life and much Irish politics and his- tory, as well as many a death and family Christmas scene to rival the best — all in under 250 pages. This deceptive eventful- ness, like everything else in the novel, is exactly right, mirroring as it does, Red- mond's own puzzled realisation of just how much has happened to him in his trans- formation from a slightly nervous grand- child to a slightly nervous grandfather.

The Heather Blazing has an almost classi- cal purity, being entirely free from tricksi- ness, pretention, or even apparent authorial judgment on the action. Toibin simply concentrates on transmitting a fic- tional life as unrefractedly as possible. In so doing he produces a novel of real quali- ty.

Yes, the hero of William Palmer's Lep- orello is Don Giovanni's servant, but this is not quite a famous-story-as-seen-from-a- different-angle work in the Stoppardian, Rhysian tradition. Palmer's Don is not Mozart's (or anybody else's) and while there are moments of plot overlap and the odd, slightly self-conscious reference to the opera, the novel wisely spends most of its time floating free of its many precursors.

Leporello, by now an old man (of course) narrates, and he does so with enor- mous flair. No understatement or delicacy here, just a rattling, page-turning, though not unquestioning, celebration of amorality and pleasure which darkens at the end into a rattling, page-turning, and very moving lament over their transience — and so (of course) over the painfulness of memory. I never thought I'd like any book that could be described as a 'romp' but Palmer serves up an irresistible feast. Occasionally, to be sure, there are hints that he intends some- thing more, a new Don Juan myth for our times, an elegy for sexual hedonism in an age of Aids, that kind of thing, but the novel never pushes this too hard. No; despite the blurb's claims Leporello remains at its most convincing simply as a piece of story-telling for its own sake. With a story this good, and one told with such verve and power, this is unlikely to provoke many complaints.

In short, The Feather Report is in that least alluring of traditions, the post-modern thriller. It does not avoid the clichés of the genre: the dodgy plot, the little apergus on whatever seems significant to the author at any given time, the head-shaking jeremiads on the death of the soul and so on. And yet, Illis's doomed attempts to shape his material cannot disguise how good that material is. The demonstrations of every- body's inherent mental instability and of the various fictions we use to Get By (central equation: Faith = Fear + The Search for Hope) are so disconcertingly accurate that by the time the inevitable God/Author figure asserts near the end that 'Life is grotesque', this seems not only not banal but an incontrovertibly proved truth.

The Feather Report can certainly be pre- tentious with the best of them. Overall, however, it represents that rarest of recent phenomena, a triumph of content over form and style.