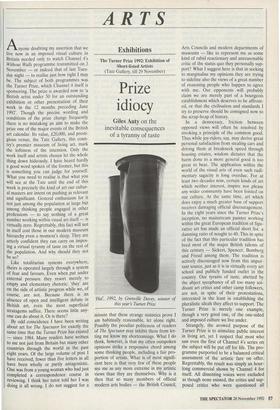 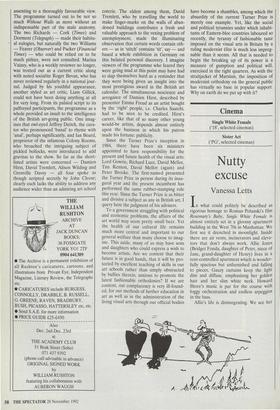 Giles Auty on the inevitable consequences of a tyranny of taste

Anyone doubting my assertion that we live now in an imposed visual culture in Britain needed only to watch Channel 4's Without Walls programme transmitted on 3 November — or indeed that of last Tues- day night — to realise just how right I may be. The subject of both programmes was the Turner Prize, which Channel 4 itself is sponsoring. The prize is awarded now to 'a British artist under 50 for an outstanding exhibition or other presentation of their work in the 12 months preceding June 1992'. Though the precise wording and conditions of the prize change frequently there is no mistaking an aim to make the prize one of the major events of the British art calendar. Its value, £20,000, and presti- gious venue, the Tate Gallery, this coun- try's premier museum of living art, mark the loftiness of the intention. Only the work itself and artists chosen let the whole thing down hideously. I have heard hardly a good word spoken of the former, but this is something you can judge for yourself. What you need to realise is that what you will see at the Tate until the end of this week is precisely the kind of art our cultur- al masters are intent on pushing as relevant and significant. General enthusiasm for it not just among the population at large but among thinking people engaged in other professions — to say nothing of a great number working within visual art itself — is virtually zero. Regrettably, this fact will not in itself cost those in our modern museum hierarchy even a moment's sleep. They are utterly confident they can carry on impos- ing a virtual tyranny of taste on the rest of the population. And why should they not be so?

Like totalitarian systems everywhere, theirs is operated largely through a system of fear and favours. Even when put under external pressure they resort merely to empty and elementary rhetoric: 'they' are on the side of artistic progress while we, of course, are not. Because there is an absence of open and intelligent debate in British art, even the most superficial stratagems suffice. There seems little any- one can do about it. Or is there?

By odd coincidence I have been writing about art for The Spectator for exactly the same time that the Turner Prize has existed — since 1984. Many readers have written to me not just from Britain but many other countries through the world in the past eight years. Of the large volume of post I have received, fewer than five letters in all have been wholly or partly antagonistic. One was from a young woman who had just completed a correspondence course in reviewing. I think her tutor told her I was doing it all wrong. I do not suggest for a 'Hal, 1992, by Grenville Davey, winner of this year's Turner Prize minute that these strange statistics prove I am habitually reasonable, let alone right. Possibly the peculiar politeness of readers of The Spectator may inhibit them from let- ting me know my shortcomings. What I do think, however, is that my often outspoken opinions strike a responsive chord among some thinking people, including a fair pro- portion of artists. What is of most signifi- cant here is that very few of these people see me as any more extreme in my artistic views than they are themselves. Why is it then that so many members of official modern arts bodies — the British Council, Arts Councils and modern departments of museums — like to represent me as some kind of rabid reactionary and unreasonable critic of the status quo they personally sup- port? What I suggest here is that in seeking to marginalise my opinions they are trying to sideline also the views of a great number of reasoning people who happen to agree with me. Our opponents will probably claim we are merely part of a bourgeois establishment which deserves to be affront- ed, or that the civilisation and standards I try to preserve should be consigned now to the scrap-heap of history.

In a democracy, friction between opposed views will often be resolved by invoking a principle of the common good. Thus while joy-riders, say, may derive great personal satisfaction from stealing cars and driving them at breakneck speed through housing estates, wisdom dictates that the harm done to a more general good is too great to bear. The application within the world of the visual arts of even such rudi- mentary sagacity is long overdue. For at least two decades now, certain kinds of art which neither interest, inspire nor please any wider community have been foisted on our culture. At the same time, art which does enjoy a much greater base of support receives damaging official discouragement. In the eight years since the Turner Prize's inception, no mainstream painter working within the great European tradition of figu- rative art has made an official short list: a damning ratio of nought to 40. This in spite of the fact that this particular tradition has bred most of the major British talents of this century — Sickert, Spencer, Bomberg and Freud among them. The tradition is actively discouraged now from this impor- tant source, just as it is in virtually every art school and publicly funded outlet in the country. Our tyrants of taste, abetted by the abject sycophancy of all too many soi- disant art critics and other camp followers, are not, in spite of their protestations, interested in the least in establishing the pluralistic ideals they affect to support. The Turner Prize is merely one example, though a very good one, of the one-sided and imposed culture we live under.

Strangely, the avowed purpose of the Turner Prize is to stimulate public interest in living art, yet I suspect that most who saw even the first of Channel 4's series on the subject will be put off for life. The pro- gramme purported to be a balanced critical assessment of the artistic fare on offer. Regrettably, the result was simply an hour- long commercial shown by Channel 4 for itself. All dissenting voices were excluded as though none existed, the critics and sup- posed critics who were questioned all

assenting to a thoroughly favourable view. The programme turned out to be not so much Without Walls as more without an indispensable part of the male anatomy. The two Richards — Cork (Times) and Dorment (Telegraph) — made their habitu- al eulogies, but naturally the two Williams — Feaver (Observer) and Packer (Financial Times) — who could be relied on to be much pithier, were not consulted. Marina Vaizey, who is a weekly reviewer no longer, was trotted out as a current critic along with noted socialite Roger Bevan, who has never reviewed regularly in a national jour- nal. Judged by his youthful appearance, another styled as art critic, Liam Gillick, could not have been doing anything at all for very long. From its palsied script to its palfreyed participants, the programme as a whole provided an insult to the intelligence of the British art-going public. One imag- ines that owl-eyed Jeffrey Deitch, the cura- tor who pronounced 'banal' to rhyme with `anal', perhaps significantly, and Ian Board, proprietor of the infamous Colony Rooms, who broached the intriguing subject of pickled bollocks, were introduced to add gravitas to the show. So far as the short- listed artists were concerned — Damien Hirst, David Tremlett, Alison Wilding and Grenville Davey — all four spoke as though scripted secretly by John Cleese; clearly each lacks the ability to address any audience wider than an admiring art school

coterie. The eldest among them, David Tremlett, who by travelling the world to make finger-marks on the walls of aban- doned buildings contributes a fresh and valuable approach to the vexing problem of unemployment, made the illuminating observation that certain words contain oth- ers — as in 'stitch' contains 'tit', say — and based a whole exhibition in Germany on this belated personal discovery. I imagine viewers of the programme who feared they were going mad at this point may have had to slap themselves hard as a reminder that they were being given an insight into the most prestigious award in the British art calendar. The simultaneous nescience and arrogance of Damien Hirst, described by presenter Emma Freud as an artist bought by the 'right' people, i.e. Charles Saatchi, had to be seen to be credited. Hirst's career, like that of so many other young would-be artists, depends almost entirely upon the business in which his patron made his fortune: publicity.

Since the Turner Prize's inception in 1984, there have been six ministers appointed to have responsibility for the present and future health of the visual arts: Lord Gowrie, Richard Luce, David Mellor, Tim Renton, David Mellor (again) and Peter Brooke. The first-named presented the Turner Prize in person during its inau- gural year and the present incumbent has performed the same rubber-stamping role this year. Since the Turner Prize is as bitter and divisive a subject as any in British art, I query here the judgment of his advisers.

To a government struggling with political and economic problems, the affairs of the art world may seem pretty small beer. Yet the health of our cultural life remains much more central and important to our general welfare than many choose to imag- ine. This aside, many of us may have sons and daughters who could express a wish to become artists. Are we content that their future is in good hands, that it will be pro- tected by excellent teaching of skills in our art schools rather than simply obstructed by bullies therein, anxious to promote the latest fashionable orthodoxies? If we are content, our complacency is very ill-found- ed, for our methods of further education in art as well as in the administration of the living visual arts through our official bodies have become a shambles, among which the absurdity of the current Turner Prize is merely one example. Yet, like the social and political tyrannies under which inhabi- tants of Eastern-bloc countries laboured so recently, the tyranny of fashionable taste imposed on the visual arts in Britain by a ruling modernist elite is much less impreg- nable than it seems. All that is needed to begin the breaking up of its power is a measure of gumption and political will, exercised in the right quarters. As with the straitjacket of Marxism, the imposition of modernist orthodoxy on the general public has virtually no base in popular support. Why on earth do we put up with it?