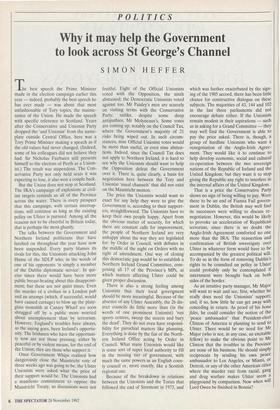 he best speech the Prime Minister made in the election campaign earlier this year — indeed, probably the best speech he has ever made — was about that most unfashionable of Tory topics, the mainte- nance of the Union. He made the speech with specific reference to Scotland. Years after the Conservative and Unionist Party dropped the 'and Unionist' from the name- plate outside Central Office, here was a Tory Prime Minister making a speech as if the old values had never changed. (Indeed, some of his colleagues did not believe they had: Sir Nicholas Fairbairn still presents himself to the electors of Perth as a Union- ist.) The result was stupendous. The Con- servative Party not only held seats it was expecting to lose, it also won a couple back.

But the Union does not stop at Scotland. The IRA's campaign of explosions at civil- ian targets reminds us all of the Province across the water. There is every prospect that this campaign, with certain interrup- tions, will continue as long as the existing policy on Ulster is pursued. Among all the reasons not to be cheerful in Britain today, that is perhaps the most ghastly.

The talks between the Government and Northern Ireland politicians that have lurched on throughout the year have now been suspended. Every party blames its rivals for this, the Unionists attacking John Hume of the SDLP who, in the words of one of his opponents 'is simply a member of the Dublin diplomatic service'. In qui- eter times there would have been more public breast-beating about this disappoint- ment; but these are not quiet times. Even the murder of a civilian in a London pub and an attempt (which, if successful, would have caused carnage) to blow up the plate- glass monolith at Canary Wharf are soon shrugged off by a public more worried about unemployment than by terrorism. However, England's troubles have always, as the saying goes, been Ireland's opportu- nity. The Irishmen who have the opportuni- ty now are not those pressing, either by peaceful or by violent means, for the end of the Union; they are those who support it. Once Government Whips realised how dangerously close the Maastricht vote of three weeks ago was going to be, the Ulster Unionists were asked what the price of their support would be. The Unionists had a manifesto commitment to oppose the Maastricht Treaty, so discussions were not fruitful. Eight of the Official Unionists voted with the Opposition, the ninth abstained; the Democratic Unionists voted against too. Mr Paisley's men are scarcely on visiting terms with the Conservative Party; unlike, despite some deep antipathies, Mr Molyneaux's. Some votes are coming up, notably on the Council Tax, where the Government's majority of 21 risks being wiped out. In such circum- stances, nine Official Unionist votes would be more than useful, or even nine absten- tions. Indeed, since the Council Tax does not apply to Northern Ireland, it is hard to see why the Unionists should want to help the Opposition defeat the Government over it. There is, quite clearly, a basis for negotiation here between the Tory and Unionist 'usual channels' that did not exist on the Maastricht motion.

The price the Unionists would want to exact for any help they were to give the Government is, according to their support- ers, straightforward. The Unionists have to keep their own people happy. Apart from the obvious matter of security, for which there are constant calls for improvement, the people of Northern Ireland are very unhappy about the way they are legislated for: by Order in Council, with debates in the middle of the night on Orders with no right of amendment. One way of closing this democratic gap would be to establish a Northern Ireland Grand Committee, com- prising all 17 of the Province's MPs, at which matters affecting Ulster could be given proper discussion.

There is also a strong feeling among Unionists that their local goverilment should be more meaningful. Because of the absence of any Ulster Assembly, the 26 dis- trict councils do little more than (in the words of one prominent Unionist) 'run sports centres, sweep the streets and bury the dead'. They do not even have responsi- bility for parochial matters like planning, Everything is done by the fiat of the North- ern Ireland Office acting by Order in Council. What many Unionists would like is some sort of super local authority to fill in the missing tier of government, with much the same powers as an English coun- ty council or, more exactly, like a Scottish regional one.

Because of the breakdown in relations between the Unionists and the Tories that followed the end of Stormont in 1973, and

which was further exacerbated by the sign- ing of the 1985 accord, there has been little chance for constructive dialogue on these subjects. The majorities of 43, 144 and 102 in the last three parliaments did not encourage debate either. If the Unionists remain modest in their aspirations — such as in asking for a Grand Committee — they may well find the Government is able to pay the price asked. There is, though, a group of hardline Unionists who want a renegotiation of the Anglo-Irish Agree- ment. They would like it to continue to help develop economic, social and cultural co-operation between the two sovereign nations of the Republic of Ireland and the United Kingdom; but they want it to stop giving the Republic any right to interfere in the internal affairs of the United Kingdom.

That is a price the Conservative Party shows no sign of being willing to pay. Were there to be an end of Fianna Fail govern- ment in Dublin, the British may well find its successors were willing to discuss re- negotiation. However, this would be likely to provoke an acceleration of Republican terrorism, since there is no doubt the Anglo-Irish Agreement comforted no one more than the IRA. The reassertion and confirmation of British sovereignty over Ulster in whatever form would have to be accompanied by the greatest political will. To do so in the form of removing Dublin's rights to be consulted on policy in Ulster could probably only be contemplated if internment were brought back on both sides of the border.

As an intuitive party manager, Mr Major will want to wait and see, first, whether he really does need the Unionists' support; and, if so, how little he can get away with conceding in return. As proof of his bona fides, he could consider the notion of the `peace ambassador' that President-elect Clinton of America is planning to send to Ulster. There would be no need for Mr Major (who is not, in any case, an excitable fellow) to make the obvious point to Mr Clinton that the troubles in the Province are none of his business. He should simply reciprocate by sending his own peace ambassador to Los Angeles, or Miami, or Detroit, or any of the other American cities where the murder rate from racial, gang and drug warfare makes Ulster seem a playground by comparison. Now when Will Lord Owen be finished in Bosnia?