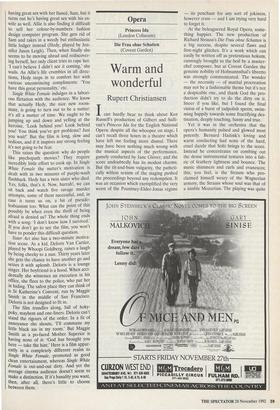 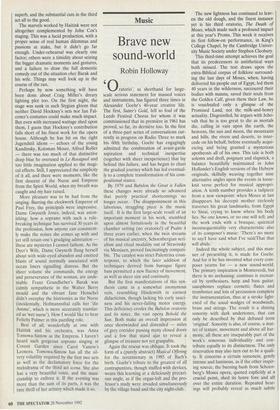 Ican hardly bear to think about Ken Russell's production of Gilbert and Sulli- van's Princess Ida for the English National Opera: despite all the whoopee on stage, I can't recall three hours in a theatre which have left me feeling more dismal. There may have been nothing much wrong with the musical aspects of the performance, gamely conducted by Jane Glover, and the score undoubtedly has its modest charms. But the tit-and-bum vulgarity, the patheti- cally witless sexism of the staging pushed the proceedings beyond any redemption. It was an occasion which exemplified the very worst of the Pountney-Elder-Jonas regime

— its penchant for any sort of jokiness, however crass — and I am trying very hard to forget it.

At the beleaguered Royal Opera, some- thing happier. The new production of Richard Strauss's Die Frau ohne Schatten is a big success, despite several flaws and first-night glitches. It's a work which can easily be written off as pretentious hokum, cunningly brought to the boil by a master- chef composer, but at Covent Garden the genuine nobility of Hofmannsthal's libretto was strongly communicated. The wonder — the necessity — of marital procreation may not be a fashionable theme but it's not a despicable one, and thank God the pro- duction didn't try to do the dirty on it. Sneer if you like, but I found the final vision of a burst of tadpolish sperm, swim- ming happily towards some fructifying des- tination, deeply touching, funny and true.

Yet it was in the orchestra that the opera's humanity pulsed and glowed most potently. Bernard Haitink's loving and warm conducting had none of the hard, cruel dazzle that Solti brings to the score. Instead he concentrates on combing out the dense instrumental textures into a fab- ric of feathery lightness and bounce. The music shimmers and curls and evanesces; this, you feel, is the Strauss who pro- claimed himself weary of the Wagnerian armory, the Strauss whose soul was that of a nimble Mozartian. The playing was quite superb, and the substantial cuts in the third act all to the good.

The marvels worked by Haitink were not altogether complemented by John Cox's staging. This was a lucid production, with a proper sense of real human dilemmas and passions at stake, but it didn't go far enough. Under-rehearsal was clearly one factor; others were a timidity about seizing the bigger dramatic moments and gestures, and a failure to draw the full domestic comedy out of the situation chez Barak and his wife. Things may well look up in the course of the run.

Perhaps by now something will have been done about Craig Miller's dreary lighting plot too. On the first night, the stage was sunk in such Stygian gloom that neither David Hockney's sets nor Ian Fal- coner's costumes could make much impact. But even with increased wattage shed upon them, I guess that Hockney's contribution falls short of his finest work for the opera house. Although he has hit on the right Jugendstil idiom — echoes of the young Kandinsky, Koloman Moser, Alfred Roller — there was too much of that distinctive deep blue he overused in Le Rossignol and too little imagination applied to the magi- cal effects. Still, I appreciated the simplicity of it all, and there were moments, like the first descent of the Nurse and Empress from the Spirit World, when my breath was caught and my hair raised.

More pleasure was to be had from the singing. Barring the clockwork Emperor of Paul Frey, the principals were impressive. Dame Gwyneth Jones, indeed, was aston- ishing: how a soprano with such a rule- breaking technique has survived 30 years in the profession, how anyone can consistent- ly make the noises she comes up with and yet still retain one's grudging admiration these are mysteries I cannot fathom. As the Dyer's Wife, Dame Gwyneth flung herself about with wide-eyed abandon and emitted blasts of sound normally associated with ocean liners signalling distress. But the sheer volume she commands, the energy and perseverance of the woman, are unde- niable. Franz Grundheber's Barak was calmly sympathetic in the Walter Berry mould and the vibrant Jane Henschel didn't overplay the histrionics as the Nurse (incidentally, Hofmannsthal calls her 'die Amme', which is more accurately translat- ed as 'wet nurse'). How I would like to hear Felicity Palmer in this puzzling role.

Best of all, wonderfully at one with Haitink and his orchestra, was Anna Tomowa-Sintow as the Empress. I haven't heard such gorgeous soprano singing at Covent Garden since Carol Vaness's Leonora. Tomowa-Sintow has all the sil- very volatility required by the first two acts as well as the declamatory force for the melodrama of the third act scena. She also has a very beautiful voice, and the musi- cianship to enliven it. If the evening was more than the sum of its parts, it was the rare thrill of her artistry which made it so.