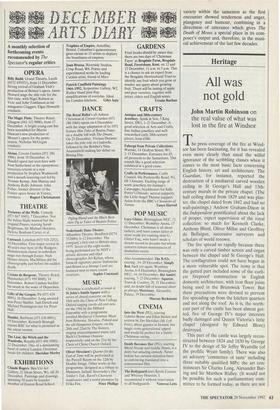 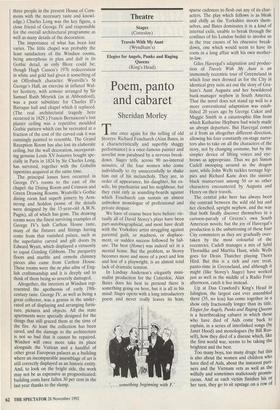 The press coverage of the fire at Wind- sor has been fascinating, for it has revealed even more clearly than usual the wilful ignorance of the scribbling classes when it comes to the most basic facts concerning English history, art and architecture. The Guardian, for instance, reported the destruction of a mediaeval carved wooden ceiling in St George's Hall and 13th- century murals in the private chapel. (The hall ceiling dated from 1829 and was plas- ter, the chapel dated from 1842 and had no wall-paintings.) Andrew Graham-Dixon in the Independent pontificated about the lack of proper, expert supervision of the royal collection: so much for Kenneth Clarke, Anthony Blunt, Oliver Millar and Geoffrey de Bellaigue, successive surveyors and scholars of world renown.

The fire spread so rapidly because there was only a carved timber screen and organ between the chapel and St George's Hall. The conflagration could not have begun in a more vulnerable spot. The irony is that the gutted part included some of the earli- est fireproof construction in English domestic architecture, with iron floor joists being used in the Brunswick Tower. But these precautions were devised to prevent fire spreading up from the kitchen quarters and not along the roof. As it is, the north- east part of the castle has been almost gut- ted, five of George IV's major interiors badly damaged and Queen Victoria's little chapel (designed by Edward Blore) destroyed.

This part of the castle was largely recon- structed between 1824 and 1830 by George IV to the design of Sir Jeffry Wyatville (of the prolific Wyatt family). There was also an advisory 'committee of taste' including three suitably qualified MPs: the art con- noisseurs Sir Charles Long, Alexander Bar- ing and Sir Matthew Ridley. (It would not be possible for such a parliamentary com- mittee to be formed today, as there are not three people in the present House of Com- mons with the necessary taste and knowl- edge.) Charles Long was the key figure, a close friend of George IV and responsible for the overall architectural programme as well as many details of the decoration.

The importance of what has been lost varies. The little chapel was probably the least satisfactory of the Windsor rooms, being amorphous in plan and dull in its Gothic detail, as only Blore could be; though Hugh Casson's 1976 redecoration in white and gold had given it something of an Offenbach character. Wyatville's St George's Hall, an exercise in inflated Wal- ter Scottery, with armour arranged by Sir Samuel Rush Meyrick (as at Abbotsford), was a poor substitute for Charles H's Baroque hall and chapel which it replaced. (The real architectural tragedy here occurred in 1829.) Francis Bernasconi's lost plaster ceiling was a repetitive moulded Gothic pattern which can be recreated at a fraction of the cost of the carved oak it was cunningly painted to resemble. The Grand Reception Room has also lost its elaborate ceiling, but the wall decoration, incorporat- ing genuine Louis XV boiseries bought spe- cially in Paris in 1824 by Sir Charles Long, has survived, together with the Gobelin tapestries acquired at the same time. The principal losses have occurred in George IV's rooms to the east of the chapel: the Dining Room and Crimson and Green Drawing Rooms. Wyatville's Gothic dining room had superb joinery by Arm- strong and Seddon (some of the details were designed by the 15-year-old A.W.N. Pugin), all of which has gone. The drawing rooms were the finest surviving examples of George IV's lush Carlton House taste, many of the fixtures and fittings having come from that vanished palace, such as the superlative carved and gilt doors by Edward Wyatt, which displayed a virtuosity to equal Grinling Gibbons. The parquetry floors and marble and ormolu chimney pieces also came from Carlton House. These rooms were the ne plus ultra of Eng- lish craftsmanship and it is deeply sad to think of them being so severely damaged.

Altogether, the interiors at Windsor rep- resented the apotheosis of early 19th- century taste. George IV, as well as being a great collector, was a genius in the under- rated art of displaying and arranging furni- ture, pictures and objects. All the state apartments were specially designed for the things that still graced them at the time of the fire. At least the collection has been saved, and the damage to the architecture is not so bad that it cannot be repaired. Windsor will once more take its place alongside the Vatican and a handful of other great European palaces as a building where an incomparable assemblage of art is still correctly displayed as an historic entity. And, to look on the bright side, the work may not be as expensive as prognosticated: building costs have fallen 30 per cent in the last year thanks to the slump.