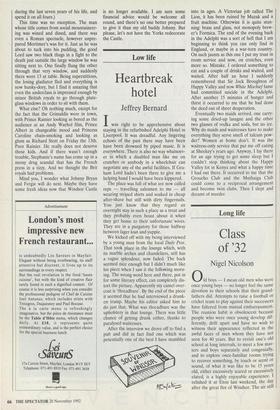 Iwas right to be apprehensive about staying in the refurbished Adelphi Hotel in Liverpool. It was dreadful. Any lingering echoes of the past there may have been have been drowned by piped music. It is everywhere. There is also no way whatsoev- er in which a disabled man like me on crutches or anybody in a wheelchair can negotiate any of the awful facilities. If Gra- ham Lord hadn't been there to give me a helping hand I would have been kippered.

The place was full of what are now called reps — travelling salesmen to me — all wearing striped shirts and soaked in cheap after-shave but still with dirty fingernails. You just know that they regard an overnight stay in such a place as a treat and they probably even boast about it when they get home to their unfortunate wives. They are in a purgatory for those halfway between lager lout and yuppie.

We kicked off with my being interviewed by a young man from the local Daily Post. That took place in the lounge which, with its marble arches and chandeliers, still has a vague splendour, now faded. The hack seemed nice enough but I didn't much like his piece when I saw it the following morn- ing. The wrong word here and there, put in for some literary effect, can completely dis- tort the picture. Apparently my camel over- coat is 'threadbare'. By the end of the piece it seemed that he had interviewed a drunk- en tramp. Maybe his editor asked him to do just that. What was threadbare was the upholstery in that lounge. There was little chance of getting drunk either, thanks to paralysed waitresses.

into in ages. A Victorian job called The Lion, it has been ruined by Muzak and a fruit machine. Otherwise it is quite stun- ning: brass and glass, not monopoly brew- er's Formica. The end of the evening back in the Adelphi was a sort of hell that I am beginning to think you can only find in England, or maybe in a war-torn country. On such jaunts as this one I put my trust in room service and now, on crutches, even more so. Mistake. I ordered something to eat and a couple of drinks and Waited, and waited. After half an hour I suddenly remembered that Sir Jock Broughton of Happy Valley and now White Mischief fame had committed suicide in the Adelphi. After another 15 minutes of hunger and thirst it occurred to me that he had done the deed out of sheer desperation.

Eventually two maids arrived, one carry- ing some dried-up lasagne and the other two glasses of vodka and soda, but no ice. Why do maids and waitresses have to make everything they serve smell of talcum pow- der? Women at home don't. It was the waitress-only service that put me off eating at Sheekey's years ago. Anyway, I lay there for an age trying to get some sleep but couldn't stop thinking about the Happy Valley lot in Kenya and what a happy time I had out there. It occurred to me that the Groucho Club and the Muthaiga Club could come to a reciprocal arrangement and become twin clubs. Then I slept and dreamt of murder.