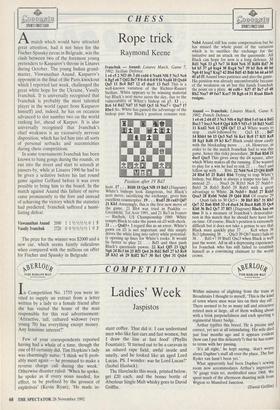 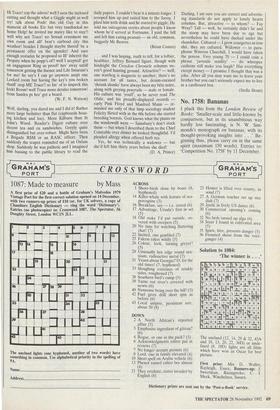 In Competition No. 1755 you were in- vited to supply an extract from a letter written by a lady to a female friend after she has visited the home of the man responsible for this real advertisement: `Attractive, tall, cultured widower (very young 70) has everything except money. Any feminine interest?'

Few of your correspondents reported having had a whale of a time, though the one of 83 certainly did. Tim Hopkins's lady was charmingly naive: 'I think we'll prob- ably meet again — he promised to make a reverse charge call during the week.' Otherwise disaster ruled: 'When he spoke, he spoke as if every noun needed, for effect, to be prefixed by the grossest of expletives' (Kevin Ryan); 'He made in-

stant coffee. That did it. I can understand men who like fast cars and fast women, but I draw the line at fast food' (Phyllis Fountain); 'It turned out to be a caravan in an oilseed rape field, awful inside and smelly, and he looked like an aged Lord Lucan. PS. I wonder: was he Lord Lucan?' (Isobel Hasluck).

The Havelucks this week, printed below, get £20 each, and the bonus bottle of Aberlour Single Malt whisky goes to David Griffin.

Within minutes of alighting from the train at Broadstairs I thought to myself, 'This is the kind of town where men wear ties on their day off.' There seemed to be so many tall and attractive retired men at large, all of them walking about with a brisk purposefulness and each sporting a regimental blazer badge. Arthur typifies this breed. He is precise and correct, yet not at all intimidating. His wife died just four months ago and it appears evident (how can I put this delicately?) that he has come to terms with her passing. 'It's all right,' he kept saying, 'don't worry about Daphne's stuff all over the place. The Sue Ryder van hasn't been yet.' What apparently had been Daphne's sewing room now accommodates Arthur's impressive 'N' gauge train set, mothballed since 1968. We spent much of the afternoon shunting milk from Wigton to Mumford Junction.

Hi Trace! cop the adress! well I seen the inclosed cutting and thought what a Giggle might as well try! talk about Posh! this old Guy in this mansoin all books Etc but very ranshackal no home Help! he invited me matey like to stay!! well why not Trace! no Sexual erassment me own room and all! beat's carboad city this weathor! besides I thought maybe thered' be a permanent offer on the agender! And sure enough yestaday he proposed so Ill' inherrit the Propaty when he popp's of!! well I acepted! got an engagment Ring as proof! hes' away untill tomorrow getting the lisence and Life Insurant's for me! he say's I can go anywere asept one Locked room but having the key's you recken thatll' stop ME Trace!! so Im' of to inspeck this lockt Room! well Trace more detales tomorrow! from Sandra ps hes' got a beard.

(W. F. N. Watson) Well, darling, you dared me and I did it! Rather more large bedsitter than flat (cupboards hous- ing kitchen and loo). More Kilburn than St John's Wood. Reader's Digest culture over decent tea and cu sandwiches. Greyly quite distinguished but over-robust. Might have been a Brigade RSM or an RASC officer. Then suddenly the teapot reminded me of an Oxfam shop. Suddenly he was pathetic and I imagined him bussing to the public library to read the daily papers. I couldn't bear it a minute longer. I scooped him up and taxied him to the Savoy. I plied him with drink and he started to giggle. He told me outrageous stories about people I know whom he'd served at Fortnums. I paid the bill and left him eating peanuts — an old, common, beggarly Mr Beaver.

(Brian Coates) . . . and I was hoping, truth to tell, for a loftier, healthier, Jeffrey Bernard figure, though with hindsight the Croydon Chronicle columns we- ren't good hunting ground. Attractive? — well, one warthog is magnetic to another; there's no account for all tastes, but denim-encased 'shrunk shanks' have always been my bête noire, along with greying ponytails — male or female. His culture was `youff, , so he never read The Oldie, and his proudly-displayed records early Pink Floyd and Manfred Mann — re- minded me only of that limp sociology student Felicity flirted with in the 60s before she started breeding borzois. God knows what the plants on the windowsill were — Sainsbury's don't stock them — but when I described them to the Chief Constable over dinner he looked thoughtful. I'd pleaded allergy when offered herb tea.

Yes, he was technically a widower — but she'd left him thirty years before she died!

Darling, I am sure you are correct and advertis- ing standards do not apply to lonely hearts columns. But, attractive — to whom? — Fay Wray? Tall — well, he certainly didn't lie and the stoop may have been due to age but nevertheless he could have ducked under the chandelier. Cultured — I grow courgettes in cow shit, they are cultured. Widower — to para- phrase Winston Churchill, I would have taken the poison. Very young 70 — I could coin a phrase 'juvenile senility' — do whoopee cushions still make you laugh? Has everything except money — I promise I thought that was a joke. After all you may want me to leave your brother but you can't seriously expect me to live in a cardboard box.

I pluck this from the London Review of Books: 'Smaller-scale and little-known by comparison, but in its unambitious way hardly less fascinating, is N. W. Sim- monds's monograph on bananas, with its thought-provoking insights into . . .' Be- ginning thus, please carry on in the same spirit (maximum 150 words). Entries to: 'Competition No. 1758' by 11 December.