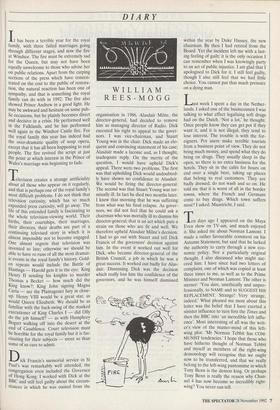 WILLIAM REES-MOGG It has been a terrible year for the royal family, with three failed marriages going through different stages, and now the fire at Windsor. The fire must be extremely sad for the Queen, but may not have been equally unwelcome to those who advise her on public relations. Apart from the carping sections of the press which have concen- trated on the cost to the public of restora- tion, the natural reaction has been one of sympathy, and that is something the royal family can do with in 1992. The fire also showed Prince Andrew in a good light. He may be awkward and hesitant on some pub- lic occasions, but he plainly becomes direct and decisive in a crisis. He performed well in the Falklands, and he has performed well again in the Windsor Castle fire. For the royal family this year has indeed had the over-dramatic quality of soap opera, except that it has all been happening to real people. The fire revived the script at just the point at which interest in the Prince of Wales's marriage was beginning to fade.

Television creates a strange artificiality about all those who appear on it regularly, and that is perhaps one of the royal family's most difficult problems. I do not think that television curiosity, which has so much expanded press curiosity, will go away. The life of this extended family is fascinating to the whole television-viewing world. Their births, their courtships, their marriages, their divorces, their deaths are part of a continuing televised story in which it is almost impossible not to become engaged. One almost regrets that television was invented so late; otherwise we should be able to have re-runs of all the most dramat- ic events in the royal family's history. Gold- en repeats would include the Battle of Hastings — Harold gets it in the eye; King Henry II sending his knights to murder Thomas a Becket — how much did the King know?; King John signing Magna Carta — see the Plantagenet fury in close- up. Henry VIII would be a great star, as would Queen Elizabeth. We should be as familiar with the back-swing of the masked executioner of King Charles I — did Oily do the job himself? — as with Humphrey Bogart walking off into the desert at the end of Casablanca. Court television must be horrible for the royal family but it is fas- cinating for their subjects — more so than some of us care to admit.

Dick Francis's memorial service in St Paul's was remarkably well attended, the congregation even included the Governor of Hong Kong. I worked with Dick at the BBC and still feel guilty about the circum- stances in which he was ousted from the

organisation in 1986. Alasdair Milne, the director-general, had decided to remove him as managing director of Radio. Dick executed his right to appeal to the gover- nors. I was vice-chairman, and Stuart Young was in the chair. Dick made an elo- quent and convincing statement of his case; Alasdair made a laconic and, as I thought, inadequate reply. On the merits of the question, I would have upheld Dick's appeal. There were two problems. The first was that upholding Dick would undoubted- ly have shown no confidence in Alasdair. We would be firing the director-general. The second was that Stuart Young was ter- minally ill. In fact he died two months later. I knew that morning that he was suffering from what was his final relapse. As gover- nors, we did not feel that he could ask a chairman who was mortally ill to dismiss his director-general; that is an act which puts a strain on those who are fit and well. We therefore upheld Alasdair Milne's decision. I had to go out with Stuart and tell Dick Francis of the governors' decision against him. In the event it worked out well for Dick, who became director-general of the British Council, a job in which he was a great success. It worked out badly for Alas- dair. Dismissing Dick was the decision which really lost him the confidence of the governors, and he was himself dismissed within the year by Duke Hussey, the new chairman. By then I had retired from the Board. Yet the incident left me with a last- ing feeling of guilt; it is the only occasion I can remember when I was knowingly party to an act of public injustice. I am glad that I apologised to Dick for it. I still feel guilty, though I also still feel that we had little choice. You cannot put that much pressure on a dying man.

Last week I spent a day in the Nether- lands. I asked one of the businessmen I was talking to what effect legalising soft drugs had on the Dutch. 'Not a lot,' he thought. Once people know they can get pot if they want it, and it is not illegal, they tend to lose interest. The trouble is with the for- eigners. Pot users make terrible tourists from a business point of view. They do not bring much money, and spend what they do bring on drugs. They usually sleep in the open, so there is no extra business for the hotels. They sit in the cafés for hours on end over a single beer, taking up places that belong to real customers. They are badly dressed, do not wash and so on. He told me that it is worst of all in the border towns, where the French and Germans come to buy drugs. Which town suffers most? I asked. Maastricht, I said.

n days ago I appeared on the Maya

Te Even show on TV-am, and much enjoyed it. She asked me about Norman Lamont. I made a rather favourable comment on his Autumn Statement, but said that he lacked the authority to carry through a new eco- nomic policy. Not a particularly original thought. I also discussed who might suc- ceed him. I have since had two letters of complaint, one of which was copied at least three times to me, as well as to the Prime Minister and Norman Lamont. The other is sterner: 'You dare, unethically and unpro- fessionally, to NAME and to SUGGEST HIS REPLACEMENT. Strange! Very strange, indeed.' What pleased me most about this letter was the belief that I have exerted a sinister influence to turn first the Times and then the BBC into 'an incredible left influ- ence'. Most interesting of all was the writ- er's view of the master-mind of this left- wing plot: 'Mr Norman Tebbit has COM- MUNIST tendencies.' I hope that those who have hitherto thought of Norman Tebbit and myself as members of the right-wing demonology will recognise that we ought now to be transferred, and that we really belong to the left-wing pantomime in which Tony Benn is the demon king. Or perhaps Tony Benn is really the reason why Chan- nel 4 has now become so incredibly right- wing? You never can tell.