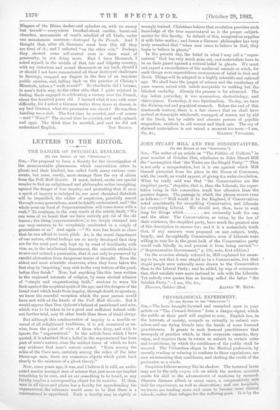 JOHN STUART MILL AND THE CONSERVATIVES.. [To ms EDITOR OF

THE " SPEOTATOR,1 SIR,—The writer of an article on "The Politics of Culture," its your number of October 21st, attributes to John Stuart Mill the "assumption that the Tories are the Stupid Party.'" This is not only a misquotation, but it is one against which Mill himself protested from his place in the House of Commons, with the result, as would appear, of giving it a wider circulation. What he really said was that "the Conservatives are the stupidest party," stupider, that is, than the Liberals, the super- lative being in this connection much less offensive than the positive degree. The passage in which the phrase occurs runs as follows :—" Well would it be for England, if Conservatives voted consistently for everything Conaervative, and Liberals for everything Liberal. We should not, then, have to wait long for things which are eminently both the one and the other. The Conservatives, as being, by the law of. their existence, the stupidest party, have much the greatest sins of this description to answer for; and it is a melancholy truth, that, if any measure were proposed on any subject, truly,. largely, and far-sightedly Conservative, even if Liberals were. willing to vote 'for it, the great bulk of the Conservative party would rush blindly in, and, prevent it from being carried."— (" Representative Government," p. 138, note, first edition.)

On the occasion already referred to, Mill explained his mean- ing to be, not that it was stupid to be a Conservative, but that stupid people were naturally mom drawn to the Conservative. than to the Liberal Party ; and he added, by way of compensa- tion, that sciolists were more inclined to side with the Liberals.. Yet nobody ever quotes him as having called the latter "the Seiolist Party."—I am, Sir, &c.,