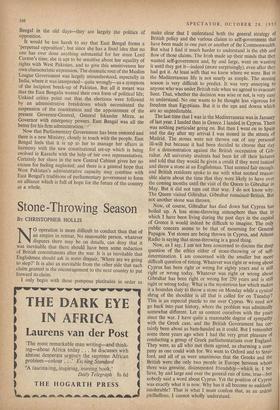 BY CHRISTOPHER HOLLIS 0 operation is more difficult to conduct than that of an empire in retreat. No reasonable person, whatever disputes there may be on details, can deny that it was inevitable that there should have been some reduction of British commitments after the war. It is as inevitable that Englishmen should ask in some despair, 'Where are we going to stop?' It is also as inevitable from the other side that each claim.granted is the encouragement to the next country to put forward its claim.

I only begin with these pompous platitudes in order to make clear that I understand both the general strategy of British policy and the various claims to self-government that have been made in one part or another of the Commonwealth. But what I find it much harder to understand is the ebb and flow of those claims. The Irish made up their minds that they wanted self-government and, by and large, went on wanting it until they got it—indeed (more surprisingly), even after they had got it. At least with that we knew where we were. But in the Mediterranean life is not nearly as simple. The stoning season is very difficult to predict. It was very annoying to anyone who was under British rule when we agreed to evacuate Suez. That, whether the decision was wise or not, is very easy to understand. No one wants to be thought less vigorous for freedom than Egyptians. But it is the ups and downs which are so unpredictable.

The last time that I was in the Mediterranean was in January of last year. I landed then in Greece. I landed in Cyprus. There was nothing particular going on. But then I went on to Spain and the day after my arrival I was stoned in the streets of Madrid. The stones were not thrown out of any personal ill-will but because it had been decided to choose that day for a demonstration against the British occupation of Gib- raltar. All university students had been let off their lectures and told that they would be given a credit if they went instead and threw a stone at an Englishman. That seemed fair enough. and British residents spoke to me with what seemed reason- able alarm about the time that they were likely to have over the coming months until the visit of the Queen to Gibraltar in May. But it did not turn out that way. I do not know why. The Queen visited Gibraltar. Gibraltar remained-British. But not another stone was thrown.

Now, of course, Gibraltar has died down but Cyprus has boiled up. A less stone-throwing atmosphere than that in which I have been living during the past days in the capital of Greece it would indeed be difficult to imagine. The only public concern seems to be that of mourning for General Papagos. Yet stones are being thrown in Cyprus, and Athens Radio is saying that stone-throwing is a good thing.

Now, as I say, I am not here concerned to discuss the deep question of the ethics either of stone-throwing or of self- determination. I am concerned with the smaller but more difficult question of timing. Whatever was right or wrong about Cyprus has been right or wrong for eighty years and is still right or wrong today. Whatever was right or wrong about Gibraltar has been right or wrong for 250 years and is still right or wrong today. What is the mysterious law which makes it a bounden duty to throw a stone on Monday while a cynical shrug of the shoulder is all that is called for on Tuesday? This is an especial puzzle to me over Cyprus. We need not go back into past history, where the problem was admittedly somewhat different. Let us content ourselves with the years since the war. I have quite a reasonable degree of sympathy with the Greek case, and the British Government has cer- tainly been about as ham-handed as it could. But I remember some three years ago when I had the very great pleasure of conducting a group of Greek parliamentarians over England. They were, as all who met them agreed, as, charming a com- pany as one could wish for. We went to Oxford and to Strat- ford, and all of us were unanimous that the Greeks and the British were the only two people in Europe between whom there was genuine, disinterested friendship—which is, I be- lieve, by and large and over the general run of time, true—but nobody said a word about Cyprus. Yet the position of Cyprus was exactly what it is now. Why has it all become so suddenly intolerable? That is what 1 must confess that, as an ardent philhellene, I cannot wholly understand.