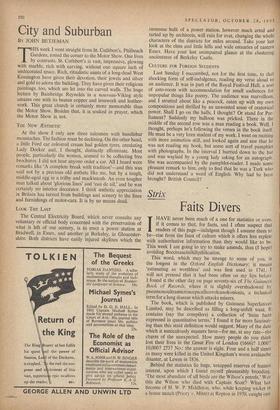 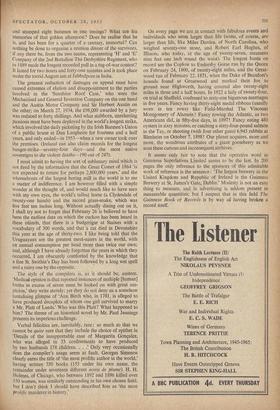 IHAVE never been much of a one for statistics or even. if it comes to that, for facts, and I often suspect that readers of this page—indulgent though I assume them to be—rise from the feast of culture which it offers less replete with authoritative information than they would like to be. This week I am going to try to make amends, .thus (I hope) avoiding floccinaucinihilipilification.

This word, which may be strange to some of you, is the longest in the Oxford English Dictionary; it means `estimating as worthless' and was first used in 1741. I will not pretend that it had been often on my lips before I found it the other day on page seventy-six of The Guinness Book of Records, where it is slightly overshadowed by' pneumonoultramicroscopicsilicovokanokoniosis, a technical term for a lung disease which attacks miners.

The book, which is published by Guinness Superlatives Limited, may be described as filling a long-unfelt want. It contains (say the compilers) a collection of 'finite facts expressed in quantitative terms.' I found it far more fascinat- ing than this staid definition would suggest. Many of the data which it meticulously musters have—for me, at any rate—the charm of the unexpected. How many people do you think lost their lives in the Great Fire of London (1666)? 1,000? 10,000? 273? No : the answer is eight. Four and a half times as many were killed in the United Kingdom's worst avalanche . disaster, at Lewes in 1836.

Behind the statistics lie huge, untapped reserves of human interest, upon which I found myself pleasurably brooding. `The most abundant of all birds are the Wilson's petrels.' Was this the Wilson who died with Captain Scott? What has become of H. W. P. Middleton, who, while keeping wicket in a house match (Priory t'. Mitre) at Repton in 1930, caught one and stumped eight batsmen in one innings? What are his memories of that golden afternoon? Does he realise that he is, and has been for a quarter of a century, immortal? Can nothing be done to organise a reunion dinner of the survivors, if any there be, from the two teams, representing 'H' and 'E' Company of the 2nd Battalion The Derbyshire Regiment, who in 1.889 made the longest recorded pull in a tug-of-war contest? It lasted for two hours and forty-one minutes and it took place under the torrid August sun at Jubbulpore in India.

The greatest reduction of damages on appeal must have caused extremes of elation and disappointment to the parties involved in the 'Sunshine Roof Case,' who were the Mechanised and General Invention Company on the one hand and the Austin Motor Company and Sir Herbert Austin on the other; on March 27, 1934, the £98,000 awarded by a jury was reduced to forty shillings. And what stubborn, unrelenting passions must have been deployed in the world's longest strike, which involved the daily picketing by the Irish Barmen's Union of a public house at Dun Laoghaire for fourteen and a half years, and only ended—in 1953—when a new owner took over the premises. (Ireland can also claim records for the longest hunger-strike—seventy-four days—and the most native sovereigns to die violent deaths-190 out of, 247).

must admit to having the sort of sublunary mind which is not fired by the information that the Great Comet of 1864 'is not expected to return for perhaps 2,800,000 years,' and the whereabouts of the largest boring mill in the world is to me a matter of indifference. I am however filled with a simple wonder at the thought of, and would much like to have seen with my own eyes, the world's tallest horse (a Clydesdale of twenty-one hands) and the record grass-snake, which was five feet ten inches long. Without actually dining out on it, I shall try not to forget that February 26 is believed to have been the earliest date on which the cuckoo has been heard in these islands, that there is a budgerigar at Staines with' a vocabulary of 300 words, and that a cat died in Devonshire this year at the age of thirty-two. I like being told that the Uruguayans are the greatest meat-eaters in the world, with an annual consumption per head more than twice our own; and, although I have already forgotten the years in which they occurred, I am obscurely comforted by the knowledge that a fine St. Swithin's Day has been followed by a long wet spell and a rainy one by the opposite.

The style of the compilers is, as it should be, austere. `Medicall opinion is that reported instances of multiple [human] births in excess of seven must be looked on with great sus- picion,' they write sternly; yet they do not deny us a somehow tantalising glimpse of 'Ann Birch who, in 1781, is alleged to have produced decaplets of whom one girl survived to marry a Mr. Platt of Leeds.' Who was this Platt? What happened to him? The theme of an historical novel by Mr. Paul Jennings presents its imperious challenge.

Verbal felicities are, inevitably, rare : so much so that we cannot be quite sure that they include the choice of epithet in `Details of the insupportable case of Margarita Goncalez, who was alleged in 33 confinements to have produced by two husbands 158 children. . . Only very occasionally does the compiler's usage seem at fault. Georges Simenon clearly earns the title of 'the most prolific author in the world,' having written 350 books (153 under his own name, the remainder under seventeen different mins de phone). H. H. Holmes, of Chicago, who between 1892 and 1896 killed over 150 women, was similarly outstanding in his own chosen field; but I don't think I should have described him as 'the most prolific: murderer in history.' On every page we are in contact with fabulous events and individuals who seem larger than life (some, of course, are larger than life, like Miles Darden, of North Carolina, who weighed seventy-one stone, and Robert Earl Hughes, of Illinois, who today, at the age of twenty-seven, measures nine feet one inch round the waist). The longest hunts on record are the Coplow to Endersby Gorse run by the Quorn on February 24, 1800, of twenty-eight miles, and the Great- wood run of February 22, 1871, when the Duke of Beaufort's hounds found at Greatwood and marked their fox to ground near Highworth, having covered also twenty-eight miles in three and a half hours. In 1922 a lady of twenty-four, on trial at Sheffield, confessed to sixty-one bigamous marriages in five years. Fancy having thirty-eight medal ribbons (usually -worn in ten rows) like Field-Marshal The Viscount Montgomery of Alamein ! Fancy rowing the Atlantic, as two Americans did, in fifty-five days, in 1897! Fancy eating 480 oysters in sixty minutes, or catching a sixty-four-pound salmon in the Tay, or shooting (with four other guns) 6,943 rabbits at Blenheim on October 7, 1898! Our planet acquires, more and more, the wondrous attributes of a giant gooseberry as we scan these curious and inconsequent archives.

It seems only fair to note that the operative word in Guinifess Superlatives Limited seems to be the last. In 200 pages the only reference to the sponsors of this admirable work of reference is the sentence : 'The largest brewery in the United Kingdom and Republic of Ireland is the Guinness Brewery at St. James's Gate, Dublin.' Modesty is not an easy thing to measure, and in advertising is seldom present in measurable quantities; but I suspect that in this field The Guinness Book of Records is by way of having broken a record itself.