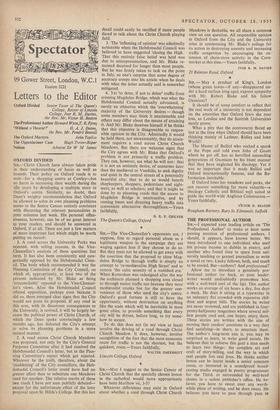 SIR,—Christ Church have always taken pride in their understanding of hares as well as hounds. Their policy on Oxford roads is to wait—for a shopping centre at Cowleybut no harm in increasing their wealth during the idle years by developing a multiple store in Oxford's centre. Similarly, no doubt, their Dean's weighty recommendation that Oxford be allowed to solve its own planning problems seems to the Senior Censor entirely consistent with discussing the relevant personalities in your columns last week. His personal offen- siveness, however, can be of no great interest to your readers, and should be answered in Oxford, if at all. There are just a few matters of more important fact which might be worth putting on record :

1. A road across the University Parks was rejected, with telling reasons, in the Vice- Chancellor's analysis of these questions last term. It has also been consistently and cate- gorically opposed by the Hebdomadal Coun- cil. The body which recommended it was the Planning Committee of the City Council, on which sft, appropriately, at least two of the persons indicated by Mr. Blake as being irreconcilably' opposed to the Vice-Chancel- lor's views. After the Hebdomadal Council offered opposition, perhaps even because it did so, there emerged clear signs that the City would not press its proposal. If any road in this area, with its disastrous consequences to the University, is revived, it will be largely be- cause the political power of Christ Church, of which the Dean spoke convincingly a few months ago, has defeated the City's attempt to solve its planning problems in a more natural manner.

2. A road across Christ Church Meadows was proposed, not only by the City's General Purposes Committee after it had received the Hebdomadal Council's letter, but in the Plan- ning Committee's report which got rejected. Whatever be the truth, therefore, about the 'maddening' of the City councillors, the Heb- domadal Council's letter could have had no greater effect than to substitute one Meadows road for another. The relative merits of these two roads I have not seen publicly debated— except for the unfortunate effect of the later proposal upon St. Hilda's College. But this last detail could easily be rectified if more people dared to talk about the Christ Church playing field.

3. The 'inflaming of opinion' was admittedly noticeable when the Hebdomadal Council was believed to have suggested 'closing the High That this entirely false belief was held was due to misrepresentation, and Mr. Blake re- mained deceived for longer than most people. But he was firmly taken to task on the point in July, so one's surprise that some degree of accuracy creeps into his article when he deals with what the letter actually said is somewhat mitigated.

4. Yet `to deter, if not to debar' traffic from crossing Magdalen Bridge, which was what the Hebdomadal Council actually advocated, is surely an objective which the 'overwhelming' majority of the University desires — though some members may think it unattainable and others may differ about the means of attaining it. And Mr. Blake deceives himself if he thinks that this objective is disagreeable to respon- sible opinion in the City. Admittedly it would be held there, not unreasonably, that its attain- ment requires a road across Christ Church Meadows. But there are welcome signs that the City agrees with Mr. Blake that Oxford's problem is not primarily a traffic problem. They can, however, see what he will not : that it is not an untimely desire, of centurnes later than the medimval or Vandalic, to seek dignity and quiet in the central streets of a potentially beautiful city; that to do so would benefit shopkeepers, shoppers, pedestrians and sight- seers, as well as scholars; and that it might be done by so planning roads that the access to Magdalen Bridge is unattractive, and Ipy routing buses and directing heavy traffic into convenient alternative thoroughfares.—Yours faithfully,