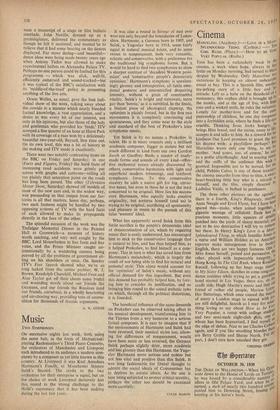 Two SYMPHONIES ON successive nights last week, both using the same bait, in the form of Malcuzynski playing Rachmaninov's Third Piano Concerto, the orchestras of Manchester and Liverpool each introduced to its audience a modern sym- phony by a composer as yet little known in this country. At Liverpool it was Karl Amadeus Hartmann's Fourth, at Manchester Stjepan Sulck's Second. The credit to the two orchestras for their enterprise is equal, but on the choice of work Liverpool decisively lost this round in the strong challenge to the Halle's supremacy that it has been making during the last few years.

It was also a round in favour of east over west not only beyond the boundaries of Lanca- shire. Hartmann, a German born in 1905, and Sulek, a Yugoslav born in 1914, seem fairly equal in natural musical talent, and to some extent in temperament, both very romantic. eclectic and conservative, with a preference for the traditional big symphonic forms. But it would be hard to find two symphonies to show a sharper contrast of 'decadent Western pessi- mism' and 'constructive people's democratic optimism.' Hartmann's symphony is unrelent- ingly gloomy and introspective, all futile emo- tional gestures and uncontrolled despairing intensity, without a grain of constructive vitality. Sulek's is bright and -extrovert, more gay than 'heroic,' as it is subtitled. In the finale, a blatant piece of ideological claptrap, the optimism is plainly forced, but in the first two movements it is completely convincing and spontaneous, and they come near to the style and standard of the best of Prokofiev's later symphonic music.

yet Sulek is by no means a Prokofiev in talent. He is in many respects only a brilliant academic composer, bigger in stature but not much different in kind from our own Gordon Jacob or Geoffrey Bush, a master of ready- made forms and sounds of every kind—effec- tive orchestral noises already discovered by others, conservative harmonies with light and superficial modern trimmings, and textbook symphonic forms. To this conservative mastery he adds a native gift for big, attrac- tive tunes, but even in these he is not the least concerned to be original. Here lies his success over Hartmann, who equally lacks creative originality, but tortures himself (and us) in trying to be original, sacrificing all spontaneity and pleasure in music to the pursuit of this false 'western' ideal.

What has apparently saved Sulek from this futile sacrifice is the people's democratic ideal of democratisation of art, which by requiring music that is easily understood, has encouraged him to stick to the conservative language that is natural to him, and has thus helped him, as it helped Prokofiev, to find himself as a com- poser. This in turn is what has saved him from Hartmann's melancholy, which is largely the result of not being able to find his natural and personal style. This alone would account for the 'optimism' of Sulek's music, without any official demand for this ingredient. But even this demand has probably helped him, by forc- ing him to consider its justification, and so bringing him round to the sound aesthetic la*s on which, through all the political distortions, it is founded.

The beneficial influence of the same demands on Prokofiev can be observed taking effect in his musical development, transforming him in the Thirties from a wry humorist to a serious lyrical composer. It is easy to imagine that if the environments of Hartmann and Sulek had been reversed, their musical styles too, allow- ing for differences of temperament, would have been more or less reversed, the German Sulek perhaps slightly drier, more academic and less gloomy than this Hartmann, the Yugo- slav Hartmann more serious and nobler but not less vital and positive than this Sulek. It was long fashionable for liberal thought to admire the social ideals of Communism but to deplore its artistic ideals. As the one is now being subjected to severer critical scrutiny, perhaps the other too should be examined more carefully.