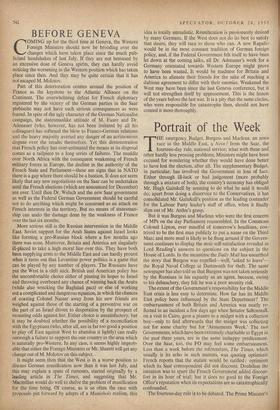 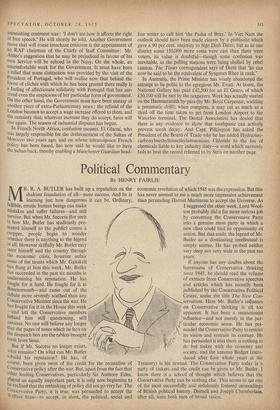 THE emergency. Budget, Burgess and Maclean, an arms race in the Middle East, a Nein! from the Saar, the fourteen-day rule, national service; what with these and other hardly less pressing problems, Ministers might have been excused for wondering whether they would have done better to have lost the election, after all. The supplementary Budget, in particular, has involved the Government in loss of face. Either through ill-luck or bad judgement (more probably through a mixture of both), the country's economy has obliged Mr. Hugh Gaitskell by seeming to do what he said it would do; apart from doing a disservice to the Conservatives, it has consolidated Mr. Gaitskell's position as the leading contender for the Labour Party leader's staff of office, when it finally slips out of Mr. Attlee's grasp.

But it was Burgess and Maclean who were the first concern of MPs on the day Parliament reassembled. In the Commons Colonel Lipton, ever mindful of tomorrow's headlines, con- trived to be the first man publicly to put a name on the Third Man; and more mud is likely to be flung around if the Govern- ment continues to display the stoic self-satisfaction revealed in Lord Reading's answers to qUestions on the subject in the House of Lords. In the meantime the Daily Mail has unearthed the story that Burgess was expelled—well, 'asked to leave'— the Royal Naval College at Dartmouth for theft. The same newspaper has also told us that Burgess was not taken seriously by the Russians in his capacity as an agent, because, owing to his debauchery, they felt he was a poor security risk.

The extent of the Government's responsibility for the Middle East crisis is less easy to determine. How far has its Middle East policy been influenced by the State Department? The embarrassment of both Britain and America was neatly re- flected in an incident a few days ago when Senator Saltonstall, on a visit to Cairo, gave a piastre to a midget with a collection box—only to find afterwards that the midget was collecting not for some charity but for 'Armaments Week.' The two Governments, which have been extremely charitable to Egypt in the past three years, are in the same unhappy predicament. Over the Saar, too, the FO may feel some embarrassment. Less than a week before the referendum, The Times, which usually is its echo in such matters, was quoting optimistic French reports that the statute would be ratified : optimism which its Saar correspondent did not discount. Doubtless the intention was to spare the French Government added discom- fort in its hour of trial; but it does no good to the Foreign Office's reputation when its expectations are so catastrophically confounded.

The fourteen-day rule is to be debated. The Prime Minister's astonishing comment was : 'I don't see how it affects the right of free speech' He will shortly be told. Another Government move that will rouse trenchant criticism is the appointment of an RAF chairman of the Chiefs of Staff Committee : Mr. Attlee's suggestion that he may be prejudiced in favour of his own Service will be echoed in the Navy. On the whole, an uncomfortable week for the Government. It must have been . a relief that some distraction was provided by the visit of the President of Portugal, who will realise now that behind the forest of clichés with which he has been greeted there really is a feeling of affectionate solidarity with Portugal that has sur- vived even the suspicions of her particular form of government. On the other hand, the Government must have been uneasy at another piece of extra-Parliamentary news : the refusal of the London busmen to accept a wage increase offered to them, and the certainty that, whatever increase they do accept, fares will rise again. The season of industrial disputes has begun.

In French North Africa, confusion mounts. El Glaoui, who Was largely responsible for the dethronement of the Sultan of Morocco two years ago, and on whose intransigence French Policy has been based, has now said he would like to have the Sultan back, thereby enabling a Manchester Guardian head- line writer to call him 'the Pasha of Bray.' In Viet Nam the outlook should have been made clearer by a plebiscite which gave a 90 per cent. majority to Ngo Dinh Diem; but as in one district some 150,000 more votes were cast than there were voters, its value is doubtful—though some confusion was inevitable, as the polling stations were being shelled by rebel cannon. The Times correspondent says of Diem that 'he can now be said to be the equivalent of Syngman Rhee in rank.'

In Australia, the Prime Minister has wisely abandoned the attempt to be polite to the egregious Mr. Evatt. At home, the National Gallery has paid £42,500 for an El Greco, of which £30,100 will be met by the taxpayers. Work has actually started on the Hammersmith by-pass (by Mr. Boyd Carpenter, wielding a pneumatic drill); when complete, it may cut as much as a third off the time taken to get from London Airport to the Waterloo terminal. The Dental Association has denied that there is any evidence to Show that toothpaste can actively prevent tooth decay. And Capt. Pilkington has asked the President of the Board of Trade why he has added Hydrazino- carbonylmethyltrimethylammonium Chloride to the list of chemicals liable to key industry duty—a word which narrowly fails to beat the record referred to by Strix on another page.