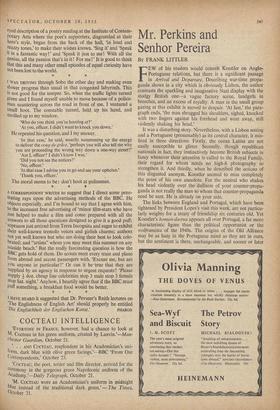 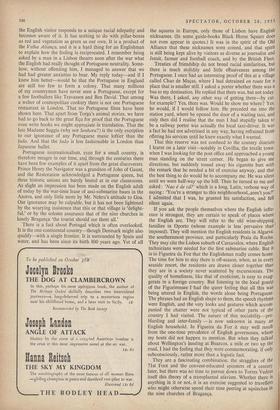 BY FRANK LITTLER FEW of his readers would consult Koestler on Anglo- Portuguese relations, but there is a significant passage in Arrival and Departure. Describing war-time propa- ganda shows in a city which is obviously Lisbon, the author contrasts the sparkling and imaginative Nazi .display with the stodgy British one—a vague factory scene. landgirls in breeches, and an excess of royalty. A man in the small group gazing at this exhibit is moved to despair. 'At last,' the para- graph ends, 'the man shrugged his shoulders, sighed, knocked with two fingers against his forehead and went away, still violently shaking his head.'

It was a disturbing story. Nevertheless, with a Lisbon setting and a Portuguese (presumably) as its central character, it mis- fired in three directions. Firstly, the ocean Latins are not easily susceptible to glitter. Secondly, though republican nationals in fact, they instinctively become British subjects in fancy whenever their attention is called to the Royal Family, their regard for whom needs no high-fi photography to strengthen it. And thirdly, when he described the actions of this disgusted anonym, Koestler seemed to miss completely the point of his own anecdote. For the neutral who shakes his head violently over the dullness of your counter-propa- ganda is not really the man to whom that counter-propaganda need be sent. He is already on your side.

The links between England and Portugal, which have been tightened by President Lopes's visit this week, are not particu- larly weighty for a treaty of friendship six centuries old. Yet Koestler's honzen-da-rua appears all over Portugal, a far more characteristic figure than the political opportunist or the wolframista of the 1940s. The origins of the Old Alliance may be as hazy in the Portuguese mind as they are in ours, but the sentiment is there, unchangeable, and sooner or later the English visitor responds to a unique racial telepathy and becomes aware of it. It has nothing to do with pillar-boxes as red and vegetation as green as our own. It is a product of the Velha Alianca, and it is a hard thing for an Englishman to explain how the feeling is reciprocated. I remember being asked by a man in a Lisbon theatre soon after the war what the English had really thought of Portuguese neutrality. Some- how, without offending him, I managed to answer that we had had greater anxieties to bear. My reply today—and if I knew him better—would be that the Portuguese in England are still too few to form a colony. That many millions of my countrymen have never seen a Portuguese, except for a few footballers like Travassos and Ben David. That among a welter of cosmopolitan cookery there is not one Portuguese restaurant in London. That no Portuguese films have been shown here. That apart from Torga's animal stories, we have had to go back to the great Ega for proof that the Portuguese even write books we might appreciate in translation. That the late Madame Suggia (why not Senhora?) is the only exception to our ignorance of any Portuguese music loftier than the fado. And that the fado is less fashionable in London than Japanese ballet.

Portuguese internationalism, even for a small country, is therefore meagre in our time, and through the centuries there have been few examples of it apart from the great discoverers. Prince Henry the Navigator was a grandson of John of Gaunt, and the Restoration acknowledged a Portuguese queen, but these historic unions are barely hinted at in our classrooms. As slight an impression has been made on the English adult of today by the war-time lease of anti-submarine bases in the Azores, and only little more by Mr. Nehru's attitude to Goa. Our ignorance may be culpable, but it has not been lightened by the wearying insistence that this or that village is 'delight- ful,' or by the solemn assurance that of the nine churches in lonely Braganca 'the tourist should' see them all.'

There is a fact about Portugal which is often overlooked. It is the one continental country—though Denmark might also qualify—with a single frontier. It is surrounded by Spain and water, and has been since its birth 800 years ago. Yet of all the squares in Europe, only those of Lisbon have English nicknames. (In some guide-books Black Horse Square does not even appear in quotes.) It was in the spirit of the Old Alliance that these nicknames were coined, and that spirit is still being kept alive by visitors as diverse as journalist and Jesuit, farmer and football coach, and by the British Fleet.

Treaties of friendship do not breed racial similarities, but there is much stolidity and little effusiveness among the Portuguese. I once had an interesting proof of this at a village called Chao de Magas, where I had detrained en route for a place that is smaller still. I asked a porter whether there was a bus to my destination. He replied that there was, but not today.

Was there, I asked, any other way of getting there—by car. for example? Yes, there was. Would he show me where? Yes.

he would, if I would follow him. He preceded me into the station yard, where he opened the door of a waiting taxi, and only then did I realise that the man I had stupidly taken to be a railway porter was actually the local taxi-driver. It was a fact he had not advertised in any way, having refrained from offering his services until he knew exactly what I wanted.

That this reserve was not confined to the country districts I learnt on a later visit—notably in Covilha, the textile town, when I was looking for the post office and approached a young man standing on the street corner. He began to give me directions, but suddenly tossed away his cigarette butt with the remark that he needed a bit of exercise anyway, and that the best thing. to do would be to accompany me. He was silent until we were half-way up the hill. Then he turned to me and asked : 'Nao 6 de cc ?' which is a long, Latin, verbose way of saying : 'You're a stranger to this neighbourhood,.aren't you?' I admitted that I was, he grunted his satisfaction, and fell silent again.

the southernmost province, and particularly Praia da Rocha. They may cite the Lisbon suburb of Carcavelos, where English technicians were needed for the first submarine cable. But it is in Figueira da Foz that the Englishman really comes home The time for him to stay there is off-season, when, as in every seaside resort, the residents are drawn closer together than they are in a society never scattered by excursionists. The quality of homeliness, like that of exoticism, is easy to exag- gerate in a foreign country. But listening to the local gossip of the Figueirenses I had the queer feeling that all this was being uttered in English, the words alone being Portuguese. The phrases had an English shape to them, the speech rhythms were English, and the very looks and gestures which accom- panied the chatter were not typical of other parts of the country I had visited. The nature of this sociability—pre- Harding and inter-family — is now unknown in many an English household. In Figueira da Foz it may well result from the one-time prevalence of English governesses, whom my hosts did not happen to mention. But when they talked about Wellington's landing at, Buarcos, a mile or two up the road, I had the feeling that they were commemorating, if only subconsciously, rather more than a logistic fact.

They, are a fascinating combination, the stragglers of the 71st Foot and the convent-educated spinsters of a century later, but there was no time to pursue down to Torres Vedras itself this theory of a transplanted atavism. Whether there is anything in it or not, it is an exercise' suggested to travellers who might otherwise spend their time peering at squinches in the nine churches of Braganca.