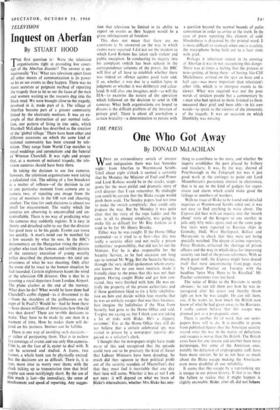 By STUART HOOD rr HE first question is: Were the television I organisations right in providing live cover- age of the Aberfan disaster? The answer is un-

equivocally 'Yes.' What sets television apart from all other means of communication is its power to let us see events as they happen. There was no more accurate or poignant method of reporting the tragedy than to let us see the faces of the men and women waiting as the rescuers dug into the black mud. We were brought close to the tragedy, involved in it, made part of it. The village of Aberfan became part of a greater community linked by the electronic medium. It was an ex- ample of that destruction of our normal isola- tion, our pattern of living in tiny units, which Marshall McLuhan has described as the creation of the 'global village.' There have been other and different occasions on which the same kind of national community has been created by tele- vision. They range from World Cup matches to royal weddings and coronations and the funeral of Winston Churchill. It was right and proper that, at a moment of national tragedy, the tele- vision cameras should have been there.

In taking the decision to use live cameras, however, the television organisations were taking a calculated risk. The editing of a live broadcast is a matter of reflexes—of the decision to cut at one particular moment from camera one to camera two, of rejecting one image from the array of monitors in the OB van and choosing another. The time for such decisions is almost too small for measurement. The reality which the cameras are observing is uncontrolled and un- controllable. There is no way of predicting what the cameras may suddenly register. It is easy in theory and detached calm to say that the director has good taste to be his guide. Events can move too quickly. A man's mind can be numbed for a few seconds by what he sees. In the BBC's documentary on the Hungarian rising the photo- grapher who took the famous and terrible picture of the summary execution of young security police described the phenomenon—his total un- awareness of what he was shooting. Only after the event did he react to the human situation he had recorded. Certain nightmares haunt the mind of the television OB director. One is that he is covering a royal departure from London Airport. The plane crashes at the end of the runway. What does he do? What would he have done bad Churchill's coffin slipped—as it threatened to do —from the shoulders of the pallbearers on the steps of St Paul's? Would he—had he been there —have shown millions of Americans how Oswald was shot down? These are terrible decisions to make. They have to be made by one man in a moment of time. How he makes them will de- pend on his instincts. Instinct can be fallible.

There is one way of avoiding su..h decisions— or rather of postponing them. That is to eschew live coverage of events and use only film cameras. Film is, on the face of it, easier to deal with. It can be screened and studied. A frame, two frames, a whole- hunk can be physically excised. But the decisions are as difficult. There is, it is true, more time to worry over them; with the clock ticking up to transmission time that brief respite can seem terrifyingly short. By the use of film much is lost—the immediacy, the sense of involvement and speed of reporting. Any sugges-

tion that television be Limited in its ability to report on events as they happen would be a grave infringement of freedom.

This does not mean that there are no c;uestions to be answered on the way in which events were reported. I did not see the incident to which Lord Robens has taken such violent and public exception. In conducting its inquiry into his complaint (which has been echoed in the correspondence columns of the press), the BBC will first of all have to establish whether there was indeed an offence against good taste and, if so, whether It was due to a sudden lapse in judgment or whether it was deliberate and calcu- lated. It will also, one imagines, wish—as will the ITA—to examine the nature of the operation which followed on the decision to send in OB cameras. What both organisations are bound to discuss is the difficult problem of the invasion of private grief. There is about all journalism a certain brutality—a determination to persist with

a question beyond the normal bounds of polite convention in order to arrive at the truth. In the case of press reporting this element of cold- bloodedness is disguised by the printed word. It is more difficult to stomach when one is watchini the microphone being held out to a face stony with grief.

Perhaps it television sinned in its coverage of Aberfan it was in not recognising this danger There was at times a feeling that the process of news-getting, of being there—of having, like Clifl Michelmore, arrived on the spot an hour and a half ago—was more important than television's other role, which is to interpret events to the viewer. What was required was not the poor words of stricken people but a commentary by a man who had spoken to them, listened to them. measured their grief and been able—in his own words—to speak to the viewers of the immensity of the tragedy. It was an occasion on which Dimbleby, was missing.