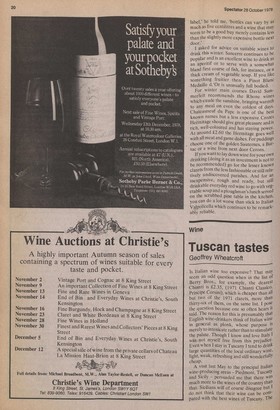 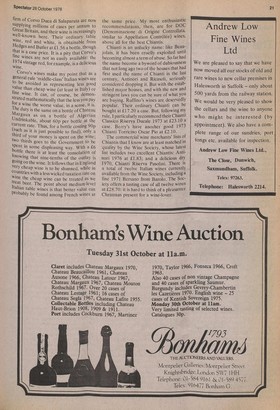 Is Italian wine too expensive? That maY seem an odd question when in the list of Berry Bros., for example, the dearest Chianti is £2.35, (1971 Chianti Classico, Principe Corsini), which is cheaper than all but two of the 1971 clarets, more than thirty-six of them, on the same list. I pose. the question because one so often hears it said. The reason for this is presumably that English wine-drinkers think of Italian wine in general as plonk, whose purpose is merely to intoxicate rather than to stimulate the palate. Though I know and love Italy I was not myself free from this prejudice. Even when I stay in Tuscany I tend to drinic large quantities of the local ordinary wine, light, weak, refreshing and still wonderfullY cheap. A visit last May to the principal Italian wine-producing areas Piedmont, TuscanY and Sicily persuaded me that there was much more to the wines of the country than that. Sicilians will of course disagree but I do not think that their wine can be CO pared with the best wines of Tuscany. The firm of Corvo Duca di Salaparuta are now Supplying millions of cases per annum to Great Britain, and their wine is increasingly well-known here. Their ordinary table wine, red and white, is obtainable from Hedges and Butler at £1.56 a bottle, though that is a case price. It is a pity that Corvo's fine wines are not as easily available: the 1974 vintage red, for example, is a delicious wine.

Corvo's wines make my point that as a general rule 'middle-class' Italian wines are to be avoided as representing less good value than cheap wine (at least in Italy) or fine wine. It can, of course, be demonstrated mathematically that the less you pay for a wine the worse value, in a sense, it is. The duty is the same on a bottle of Chateau Margaux as on a bottle of Algerian Undrinkable, about 60p per bottle at the current rate. Thus, for a bottle costing 90p (such as it is just possible to find), only a third of your money is spent on the wine; two thirds goes to the Government to be spent in some displeasing way. With a £6 bottle there is at least the consolation of knowing that nine-tenths of the outlay is going on the wine. It follows that in England very cheap wine is to be shunned, while in countries with a less wicked taxation rate on wine the cheap wine can be treated as we treat beer. The point about medium-level Italian table wines is that better value can Probably be found among French wines at the same price. My most enthusiastic recommendations, then, are for DOC (Denominazione di Origine Controllata, similar to Appellation Controlee) wines, above all for the best Chiantis.

Chianti is an unlucky name: like Beaujolais, it has been cruelly exploited until becoming almost a term of abuse. So far had the name become a byword of dubiousness that not long ago two of the houses that had first used the name of Chianti in the last century, Antinori and Ricasoli, seriously considered dropping it. But with the established major houses, and with the new and stringent laws you can be sure of what you are buying. Ruffino's wines are deservedly popular. Their ordinary Chianti can be bought at £17.20 a case. But, following my rule, I particularly recommend their Chianti Classico Riserya Ducale 1973 at £23.10 a case. Berry's have anoiher good 1973 Chianti Torricino Oscar Pio at 12.10.

The commercial wine merchants' lists of Chiantis that I know are at least matched in quality by the Wine Society, whose latest list includes two excellent Chiantis: Anti non 1976 at £1.83; and a delicious dry 1970, Chianti Riserva Pasolini. There is a total of twelve Italian wines currently available from the Wine Society, including a fine 1971 Bersano from Barolo. The Society offers a tasting case of all twelve wines at £28.70: it is hard to think of a pleasanter Christmas present for a wine-lover.