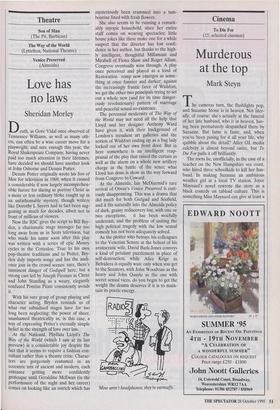 Love has no laws

Doath, as Gore Vidal once observed of Tennessee Williams, as well as many oth- ers, can often be a wise career move for a playwright; and sure enough this year, the Royal Shakespeare Company, having never paid too much attention in their lifetimes, have decided we should have another look at John Osborne and Dennis Potter.

Dennis Potter originally wrote his Son of Man for television in 1969, when it caused a considerable if now largely incomprehen- sible furore for daring to portray Christ as a more or less ordinary bloke caught up in an unfathomable mystery, though writers like Dorothy L Sayers had in fact been sug- gesting as much for decades, albeit not in front of millions of viewers.

Now the RSC gives the script to Bill Bry- den, a charismatic stage manager far too long away from us in Scots television, but who made his name soon after this play was written with a series of epic Mystery cycles in the Cottesloe. True to his own pop-theatre traditions and to Potter, Bry- den duly imports songs and has the audi- ence join in the crowd scenes: sure, there's imminent danger of Godspell here, but a strong cast led by Joseph Fiennes as Christ and John Standing as a weary, elegantly confused Pontius Pilate consistently avoids it.

With his sure grasp of group playing and character acting, Bryden reminds us of what our subsidised stages have for too long been neglecting: the power of sheer, unashamed theatricality as, in this case, a way of expressing Potter's eternally simple belief in the strength of love over law.

At the National, Phyllida Lloyd's The Way of the World (which I saw at its last preview) is a considerable joy despite the fact that it seems to require a fashion con- sultant rather than a theatre critic. Charac- ters are gorgeously costumed in an eccentric mix of ancient and modern, each entrance getting more confidently grotesque until Geraldine McEwan (in the performance of the night and her career) comes on looking like an ostrich which has mysteriously been crammed into a tam- bourine lined with fresh flowers.

She also seems to be running a remark- ably myopic household, since her entire staff comes on wearing spectacles; little house jokes like these make one for a while suspect that the director has lost confi- dence in her author, but thanks to the high- ly intelligent, thoughtful Millamant and Mirabell of Fiona Shaw and Roger Allam, Congreve eventually wins through. A play once perceived and played as a kind of Restoration romp now emerges as some- thing at once funnier and darker; against the increasingly frantic farce of Wishfort, we get the other two principals trying to set out a whole new (and for its time danger- ously revolutionary) pattern of marriage and peaceful sexual co-existence. The perennial modernity of The Way of the World may not need all the help that Lloyd and her designer Anthony Ward have given it, with their background of London's trendiest art galleries and the notion of Wishfort ending up as a bag lady locked out of her own front door. But in here somewhere is an intelligent reap- praisal of the play that raised the curtain as well as the alarm on a whole new artillery charge in the battle of the sexes; what Lloyd has done is show us the way forward from Congreve to Coward.

At the Almeida, Ian McDiarmid's rare revival of Otway's Venice Preserved is curi- ously disappointing. This was a drama that did much for both Gielgud and Scofield, and it fits naturally into the Almeida policy of dark, grainy rediscovery but, with one or two exceptions, it has been woefully undercast, and the problem of uniting the high political tragedy with the low sexual comedy has not been adequately solved.

As the plotter who betrays his colleagues to the Venetian Senate at the behest of his aristocratic wife, David Bark-Jones conveys a kind of petulant puzzlement in place of self-destruction, while. Alice Krige as Belvidera is equally wan: only when you get to the Senators, with John Woodvine as the heavy and John Quayle as the one with secret sexual vices, do you begin to get the weight the drama deserves if it is to main- tain its poetic energy.

`Mine aren't headphones, they're earmuffs.'